Japan’s Trade Policy in the Midst of Uncertainty Asie.Visions, No. 112, February 2020

The multilateral trading system under the World Trade Organization (WTO) has been of the utmost importance for Japan’s trade policy. 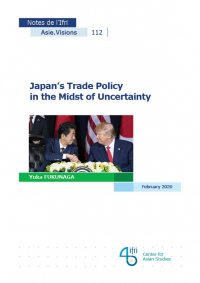 In particular, Japan strongly supports the WTO’s rule-based dispute settlement mechanism, and frequently uses it. At the same time, in recent years, the adoption and implementation of regional and mega-regional trade agreements have become critical in Japan’s trade policy, with the stalling of the Doha Round negotiations in the WTO.

Although the core of its trade policy remains the same today, Japan has been forced to rethink and modify it in response to the aggressive and unilateral trade policy of the Trump administration.

First, Japan had to change its approach to regional trade agreements because of the withdrawal of the United States (US) from the Trans-Pacific Partnership (TPP) Agreement. In September 2018, Japan and the US decided to enter into negotiations for a bilateral Trade Agreement on goods, as well as on other key areas including services. The negotiations were conducted at an unprecedented pace, mainly due to the political pressure from the US agricultural sector. On 7 October 2019, Japan and the US signed a trade agreement and a digital trade agreement, which entered into force on 1 January 2020. Prime Minister Abe hailed the Trade Agreement as a “win-win” for both countries because it covers products of interest for both sides. However, the agreement provoked mixed reactions in Japan on the following three points. First, the Trade Agreement could be detrimental to the Japanese beef and pork industry in the long run. Second, the agreement is not satisfactory for the Japanese automotive industry either, because it does not reduce tariffs on automobiles and automotive parts. Third and finally, there is potentially a question of consistency with Article XXIV:8(b) of the General Agreement on Tariffs and Trade (GATT), which requires duties and other restrictive regulations of commerce to be eliminated on “substantially all the trade” within a Free Trade Agreement (FTA).

After the withdrawal of the US from the TPP, Japan also intensified its efforts to conclude the Japan-European Union (EU) Economic Partnership Agreement (JEEPA). On 17 July 2018, Japan and the EU signed the JEEPA, which entered into force on 1 February 2019. The JEEPA is expected to increase Japan’s real GDP by around 0.99% and facilitate broader cooperation between Japan and the EU. Japan is also participating in the negotiation of the Regional Comprehensive Economic Partnership (RCEP), which were launched on 20 November 2012 between Japan, China, Korea, Australia, New Zealand, India and the ASEAN countries. Although their liberalization commitments and rules are less ambitious compared to those of the TPP or the JEEPA, the RCEP, if concluded, would cover about half of the world’s population and about 30% of the world’s trade. However, the future of the RCEP has become precarious after India expressed its intention to withdraw from the deal following a meeting in November 2019.

Another change in Japan’s trade policy is the increasing importance of national security considerations. For example, the potential threat of the imposition of additional tariffs on automobiles and automotive parts for national security purposes under Section 232 overshadows the post-TPP bilateral negotiations with the US. The issue of national security has also become controversial in trade relations between Japan and South Korea. On 4 July 2019, Japan tightened its licensing policies and procedures on the export of certain controlled products and their relevant technologies destined for Korea. According to the Japanese government, the measures can be justified for national security reasons pursuant to the national security exception under Article XXI of the GATT in the light that “the Japan-[Republic of Korea (ROK)] relationship of trust including in the field of export control and regulation has been significantly undermined” and that the government “has recently found that certain sensitive items have been exported to the ROK with inadequate management by companies”. However, South Korea requested consultations with Japan in the WTO dispute settlement mechanism on the matter, claiming that Japan’s measures violated the WTO agreements and were not justified by Article XXI of GATT. The two countries held consultations, but failed to reach a mutually satisfactory solution. At this point, it is unclear whether they will be able to reach a mutually satisfactory solution through consultations. If not, the matter will be taken to a panel review.

Finally, Japan seeks to take leadership in the WTO reform talks. Currently, the WTO faces existential challenges, with its rulemaking and dispute settlement functions impaired. As a champion of the multilateral trading system under the WTO, Japan takes initiatives to modernize and reinvigorate the organization. In terms of rulemaking, the Japanese government considers it essential to update the WTO rules to fit the technological developments. More specifically, the government tries to take leadership in negotiations to make new rules for electronic commerce. In terms of dispute settlement, the most urgent problem for all WTO members is the paralysis of the Appellate Body. Although the Japanese government has not clearly articulated its position on the reform of the Appellate Body, it could play a critical role in bridging differences among WTO members regarding the Appellate Body.

Cercles dirigeants russes : infaillible loyauté au système...
END_OF_DOCUMENT_TOKEN_TO_BE_REPLACED
Asia after the War in Ukraine: Re-imagining multilateralism and the risk of...