The Kashmir Uprising and India-Pakistan Relations: A need for conflict resolution, not management Asie.Visions, No. 90, December 2016

This paper analyses the causes and consequences of the 2016 uprising in Kashmir, making six interrelated arguments. 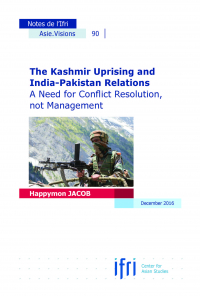 First of all, it argues that notwithstanding the fact that India and Pakistan have multiple conflicts to resolve, including the Siachen Glacier, Sir Creek etc., Kashmir continues to be the most significant dispute in so far as it holds the key to a rapprochement between the two South Asian rivals. For instance, during the period when Kashmir was purposefully addressed between the two sides, from 2003 to 2007/8, the relationship improved significantly on other fronts as well.

Second, the direct or indirect complicity of the Pakistani state in the terrorist violence carried out against India is the fundamental reason why the two sides have been unable to make any definitive gains from their bilateral dialogues.

Third, the paper underlines that normalcy in Kashmir can be misleading. The 2008 uprising came as a complete surprise given the fact that the past insurgency had been a failure and India and Pakistan had made positive strides in their relationship. Since 2008, then, it so appears that normalcy – a situation wherein people seemingly go about their daily lives without bothering with overt dissident political activism or protests – is a temporary break between major uprisings. Mistaking such temporary normalcy as an indication of a complete end to the insurgency in the state has proven to be a mistake more than once.

Fourth, this paper argues that the new insurgency in Kashmir that is taking root today is quite dissimilar to the one that began in the late 1980s and tapered off in the mid-1990s. Kashmir today is faced with a new wave of young, educated militants, a large number of whom seem to be driven by religious motivation. This is very different from the 1990s. Moreover, this is an indisputably indigenous movement. It will therefore require extraordinary effort from New Delhi to bring Kashmir back from the brink of another full-blown insurgency.

Fifth, the Kashmir conflict is a political contestation operating at many levels, which should be addressed using both symbolic and substantive responses. One of the reasons why the new BJP-led government in New Delhi has not been able to reach out to the Kashmiri separatists is due to the clash of symbols that drive their respective political positions.

Finally, the electoral dynamics in India have a clear bearing on New Delhi’s ability to resolve the Kashmir conflict. Resolving this conflict in a win-win manner is indeed the correct thing to do from a grand strategic point of view, but it may not necessarily be so from a short-term electoral consideration: the latter seems to inform the BJP’s approach to Kashmir.

France’s Indo-Pacific Strategy and the Quad Plus
END_OF_DOCUMENT_TOKEN_TO_BE_REPLACED
Digitalization in the (post) COVID World: Views from Japan and Europe

The COVID-19 crisis has highlighted the importance of accelerating the digital transformation...

The COVID-19 pandemics has highlighted the significance, as well as the deep crisis of the...