India's new citizenship law is an outcome of Hindutva Constitutionalism that legitimizes the notion of Hindu victimhood. While the opposition to the law has been vocal, it has remained fragmented. 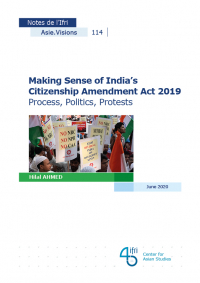 The objective of this paper is to go beyond the standard story of the Citizenship Amendment Act (CAA) 2019, a law passed by the Indian Parliament that offers citizenship to non-Muslim religious communities of three Muslim-majority states (Pakistan, Bangladesh and Afghanistan). The paper recognizes the CAA as a political phenomenon and tries to map out the ways in which CAA-related politics is played out. It asks three sets of questions: (a) What is the historical/political background that makes this law highly controversial? (b) What are the legal-technical issues related to this law and what are its political implications? (c) What has been the response of different groups, especially of the Muslim communities? What are their arguments and positions?

The paper argues that the CAA is an outcome of a new politics of Hindutva constitutionalism. This politics relies heavily on the legal-technical ambiguities inherent in the post-1980 citizenship framework to carve out a space for itself. The growing centralization and state control to regulate the citizenship apparatus is reflected not only in the CAA, but also in the National Register of Citizens and the National Population Register. The CAA, in this sense, stems from the notion of New India, a political doctrine that is based on the desirability of responsive citizens.

Second, the CAA is mostly concerned about the BJP’s newly created Hindutva constituency. The non-Muslims coming from Afghanistan, Pakistan and Bangladesh will not get Indian citizenship on their arrival. The government has not yet prepared the proper mechanism to determine the level of religious persecution, a precondition of citizenship as per the 2015 rules. In fact, there is no guarantee that these migrants would eventually get Indian citizenship. This technical ambiguity, however, is politically useful. It provides an opportunity to Hindutva forces to reinvent the Hindu victimhood argument. Citizenship to non-Muslims of Muslim countries, in this sense, is a new long-term project of contemporary Hindutva.

Third, the opposition to CAA is equally fragmented. The political class does not want to go beyond the established Hindutva hegemony. In fact, except a few parties, the non-BJP groups found it difficult to associate themselves directly with anti-CAA protests. As a result, the creative potentials unleashed by the Muslim-dominated anti-CAA protests could not be channelized to produce any creative critique of Hindutva hegemony.