Natural Allies? The India-US Relations from the Clinton Administration to the Trump Era Asie.Visions, No. 104, December 2018

In recent years, experts and onlookers have noted a convergence of geopolitical interests between the United States and India. 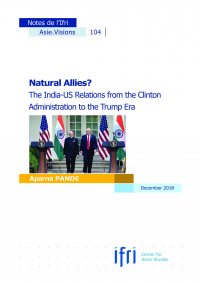 Such an alignment seems natural and overdue. India has long shared striking similarities to the U.S. domestically, boasting a large multiethnic population, a democratic approach to governance and a strong feeling of national pride. Today, moreover, India and the United States face many of the same global threats. The rise of China challenges both American hegemony and Indian regional influence. Additionally, the United States currently shares India’s skepticism about Pakistan’s support for terrorist groups that operate inside Afghanistan and India and have a safe haven within Pakistani territory.

However, for two countries with such extraordinary domestic similarities and with such convergence of geopolitical interests, the United States and India have a perplexingly ordinary relationship. In fact, the two countries, which seem like they should be strong allies on paper, continuously find domestic factors and logistical challenges getting in the way of richer ties. Admittedly, over the past two and a half decades, they have worked to overcome these impediments and to build a stronger strategic partnership. In so doing, America’s first three post-Cold War presidents learned two especially powerful lessons from their interactions with India. First, genuine diplomatic connections are essential. Because Presidents Clinton, Bush and Obama made a real effort to connect with Indian leaders and unquestionably recognized India as a core part of American grand strategy, they strengthened bilateral trust and cooperation. The second lesson is the need to compromise. Unsurprisingly, India’s outlook on global affairs differs from that of the United States and India puts its own national interests first, which means the two countries are bound to disagree on certain issues.

The Trump administration would be well served to remember the lessons of its predecessors. Although Trump’s relationship with Modi appears to be positive, it seems superficial when compared with the record of Presidents Clinton, Bush and Obama’s engagement with their Indian counterparts. In the defense and security area, the Trump administration has continued the tradition set by its predecessors of strengthening trade and cooperation with India, but the two governments face geopolitical challenges that necessitate a stronger partnership. Moreover, Trump’s rhetoric and economic policies have put the growth of the partnership in jeopardy. Trump and Modi are both right wing nationalists who espouse some degree of political populism and a penchant for economic protectionism. To create a lasting diplomatic partnership, the two men should focus on their similarities and work toward compromise instead of standing firm where they differ.

The United States and India share a similar vision for the future security architecture of the Indo-Pacific, and have similar goals in the region. What remains to be seen, however, is how the United States deals with a country – India – that does not fit the category of a traditional American military ally and yet seeks to become a strategic partner, does not seek American security guarantees and visualizes itself as a future great power. Further, unlike other American allies, India never joined any alliance, so there is no multi-layer cross-institutional relationship between the two countries. With an American president who seeks to boost ties with India and stand up to China, this is a rare chance to re-align U.S. and Indian policy in the interests of both countries.

The Right-wing Extremism in Germany. An Underestimated...
END_OF_DOCUMENT_TOKEN_TO_BE_REPLACED
Economic and political rivalries in Russia's energy sector