Papua New Guinea: Continuing to Muddle Through Asie.Visions, No. 97, January 2018

Papua New Guinea (PNG) is one of the most resource-rich countries in the world, but successive governments have failed to put the country on a stable development track. 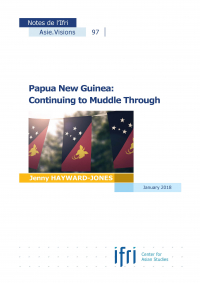 The instability that characterized democracy in PNG for 25 years after independence in 1975 has evolved into a more predictable, but also more powerful central government. The recently re-elected government of Prime Minister Peter O’Neill will continue to control members of parliament through the allocation of valuable constituency development funds. These funds place the onus of essential service delivery on individual members of parliament but lack the transparency and accountability measures to which national institutions are obliged to adhere.

After a decade of economic growth, peaking at a high of 13.3 percent in 2014, PNG’s economy has slowed, revenue has collapsed and the government is facing a severe budgetary crisis. PNG will host the Asia-Pacific Economic Cooperation  (APEC) Leaders’ Summit in 2018 as it implements dramatic cuts in expenditure for health and education.  The government’s plans to increase revenue are unlikely to come to fruition and it lacks the will to take measures such as allowing currency depreciation or reducing the cost of constituency development funds that could stimulate growth and limit further pressure on the budget.

What limited progress that has been made in raising the living standards of the majority of the population is now being threatened by declines in funding for hospitals, rural clinics and all levels of schooling. Ambitious government policies to deliver free education and health services have not succeeded in raising the quality of education or delivering more health care. Poor governance, including corruption and a lack of capacity in public services, acts as a further constraint on social development.

Although it faces significant internal security challenges such as high levels of crime and violence, firearms trade and violence against women and children, PNG faces a relatively benign external threat environment. But like many countries, PNG is grappling with how it should deal with the growing influence of China. China is an increasingly important trading partner and investor, with new infrastructure investments in PNG being made under the One Belt, One Road initiative. Australia remains PNG’s most important strategic partner, but Australia’s current dominance in investment, trade and aid in PNG cannot be taken for granted. The recent controversy associated with Australia’s detention of asylum seekers in the province of Manus has highlighted some of the strains in Australia-PNG relations caused by Australia’s punitive approach to dealing with asylum seekers. Australia’s 2016 Defence White Paper and 2017 Foreign Policy White Paper prioritize the importance of a stable and prosperous PNG and promise continuing deep engagement with Australia’s nearest neighbor. But China’s willingness to ask a price for its commitment to PNG and the potential for growth in that commitment will challenge PNG’s loyalties.

PNG’s population has a long tradition of resilience and self-sufficiency and the state frequently finds a way to ‘muddle through’ each seeming disaster that strikes the nation. But in a rapidly changing world, there is no certainty that PNG can continue to muddle through without creating much more serious problems for the next generation of its leaders to manage.

Naval Combat Redux: A Renewed Challenge for Western Navies
END_OF_DOCUMENT_TOKEN_TO_BE_REPLACED
Is the UN Security Council still relevant? France and Japan's views on the future of...