Prospects for the New EU Strategy on India: Game Changer or Business as Usual? Asie.Visions, No. 108, September 2019 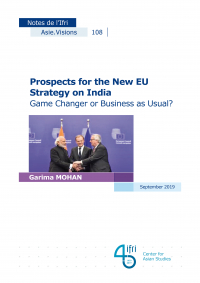 It reflects three critical shifts: firstly, the EU no longer views India from a “trade lens” only, recognizing its important geopolitical role in maintaining a multipolar Asia. Second, the strategy frames EU-India relations in the context of broader geopolitical developments, primarily the rise of China. Recognition of the China challenge and its impact not only in Europe, but also on the balance of power in Asia, has pushed the EU to change the nature of its partnerships in the region, particularly with India. Finally, the strategy links European security and prosperity to developments in Asia, broadening the scope of EU foreign policy substantially.

This paper analyses the new EU strategy on India and highlights areas, which represent a departure from previous strategies. The paper looks specifically at proposals for greater foreign and security cooperation, for securing a rules-based order, increasing regional connectivity, improving trade and investment, and building better coordination on and with India. These proposals are commendable and respond to a long laundry list suggested by experts from both sides over a long time. They also fit well with India’s priorities, namely responding to increasing Chinese political, economic and military presence in South Asia, security in the Indian Ocean, as well as more proactive engagement in regional and global institutions.

Finally, the paper suggests ways of taking this forward and ensuring the strategy does not remain a paper tiger in the long arsenal of EU-India declarations. While more dialogues on global and strategic issues is a great idea and will help change perceptions in New Delhi that the EU is not a strategic actor, the EU will have to ensure this is not hindered by the Indian Ministry of External Affairs’ already overstretched capacities and the 30 existing EU-India dialogues. Focusing on ongoing debates in India and Europe in these dialogues, particularly connectivity projects, maritime security in the Indian Ocean, 5G networks and infrastructure might also open up new avenues of cooperation.

Overall the EU-India relationship has witnessed remarkable momentum over the last four years – aided by political will from both sides, the China challenge, friction in transatlantic ties, and common challenges within Europe and India. The new strategy is a good first step to build on this momentum. However, it needs to be translated into action fast.

China's Ambitions in Space: The Sky's the Limit