Renewable Energy in India: Solutions to the Financing Challenge Asie.Visions, No. 98, February 2018

India has committed to ambitious action on climate change, but financing its renewable energy goals remains a significant challenge. 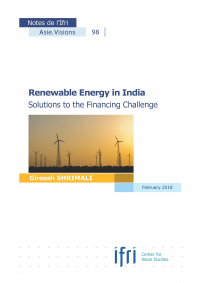 India has pledged that renewable energy will be 40% of the country’s expected electricity generation capacity in 2030, which includes a wind power target of 60 GW and solar power target of 100 GW by 2022. This is a significant increase from capacities existing in 2015, which are 23 GW of wind power and 3.5 GW of solar power. Scaling up financing for renewable energy will be crucial as meeting these targets requires an investment of approximately USD 189 billion by 2022. However, analysis at the Climate Policy Initiative (CPI) indicates that the actual realized investment could fall short of the requirement by 29% (USD 17 billion) for equity and 27% (USD 36 billion) for debt.

In order to fill this financing gap and boost the renewable energy sector, India has put in place several progressive policies, both at the federal and state level. Federal policy support has been in the form of accelerated depreciation, generation-based incentives and viability gap funding, while state-level policy support has typically been in the form of feed-in tariffs, net metering, and tax/duty exemptions.

Despite these supportive federal and state policies, financing challenges are bound to continue given the excessive reliance on commercial banks for debt finance. Overall, Indian renewables projects face higher financing costs than comparable projects in the US or Europe and this is a major obstacle to their deployment due to the high initial investment. Given the ambitious renewable energy targets, but limited government budgets, the cost-effectiveness of the support policies becomes an important criterion for policymakers.

To overcome these challenges, a combination of short and long-term policy solutions should be explored. The author has found that, in the short term, federal support policies such as an interest subsidy and accelerated depreciation are more cost-effective than other existing federal and state policies. An interest subsidy is an attractive policy in that it directly addresses the lack of availability of low-cost, long-term debt with a relatively low capital outlay by the government.  Accelerated depreciation is one of the easiest policies to manage because it requires no cash disbursement by the government and the reduction in tax revenue can also be partly recovered in the later years. In the long term, it is possible to further lower the total cost of government support by using policies that address a key barrier for renewable energy projects – the cost of debt. The government could provide reduced cost, extended tenor debt to project developers below the commercial rate of interest for longer than the usual commercial tenor. While reduced cost, extended tenor debt is much more cost-effective than accelerated depreciation over a project’s life cycle, it would require a higher allocation of the budget in the initial years.

Given the constraints on government budgets and the large capital outlay required to achieve the renewable energy targets, both public and private capital needs to be mobilized in the long run. A number of less conventional financial instruments, such as credit and risk guarantees, innovative currency hedging facilities, government bonds, and instruments developed through the India Innovation Lab for Green Finance could help attract additional private capital and also lower the cost of debt in the range of 1.4-4.5 percentage points. While policy support can provide the essential thrust for the uptake of renewable energy, scaling up private investment through the introduction of innovative financial instruments will ensure that India can achieve its clean energy targets. Furthermore, these instruments could provide a useful basis for renewable energy financing in other markets, such as Africa, through entities such as the International Solar Alliance (ISA).

France’s Indo-Pacific Strategy and the Quad Plus
END_OF_DOCUMENT_TOKEN_TO_BE_REPLACED
Digitalization in the (post) COVID World: Views from Japan and Europe

The COVID-19 crisis has highlighted the importance of accelerating the digital transformation...

The COVID-19 pandemics has highlighted the significance, as well as the deep crisis of the...