This target-driven policy approach is, however, increasingly facing challenges due to the lack of progress on greenhouse gas emission reductions in key sectors, i.e. the power, the transport and the building sector. 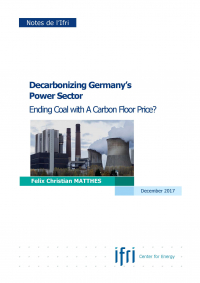 Although the German power sector has experienced strong growth in power generation from renewable energy sources, the sector’s greenhouse gas emissions have almost stagnated in recent years. This is essentially due to the large coal-based power generation fleet maintaining its production levels and surplus generation was increasingly exported to neighbouring countries. The cross-border exchange of electricity was more or less balanced at the turn of the millennium; currently the net electricity exports amount to a share of 8 % to 9 % of total production.

The lack of emission reductions in the power sector has triggered an increasing political debate on coal phase-out since 2014, which led to a first round of forced decommissioning of lignite-fired power plants that was, however, linked to significant compensation payments. Discussions about the next steps of the coal phase-out have been contentious in the recent coalition talks for building a new government after the 2017 federal election; these steps will definitely remain on the political agenda in the years ahead.

Germany’s system of energy taxation is complex and inconsistent from the perspective of (implicit) carbon pricing; it needs updating and streamlining to the recent challenges and future needs in the framework of the energy transition (broader incentives for emission reductions, sector integration, etc.). The interest in carbon pricing has grown significantly in recent years, which has created a window of opportunity for concerted action on carbon pricing between Germany and its neighbours.

With a view to the French efforts to complement the traditional energy taxes with a CO2 adder a closer cooperation and convergence of energy taxation approaches could add significant value to the climate and energy policy of both countries. Introducing a carbon floor price for power generation within the European Union Emissions Trading System – EU ETS) should, however, be a key priority at least for the countries that are interlinked by the Central Western European regional power market.

Such a regional price floor would increase the integrity and consistency of greenhouse gas emission reduction efforts in the participating countries and make a significant contribution to the emerging coal phase-out in countries such as Germany, France, the Netherlands and Denmark. If static and dynamic effects are considered, carbon price levels of € 15 to € 25 would trigger significant emission reductions and price levels of € 30 to € 35 very significant emission reductions. However, the introduction of a regional carbon floor price for electricity generation faces legal, technical and political challenges.

With respect to the existing and emerging political narratives it will be important to frame a carbon floor price as part of a larger package:

Building Bridges over the Blue Pacific. Beyond Marine...
END_OF_DOCUMENT_TOKEN_TO_BE_REPLACED
Asia after the War in Ukraine: Re-imagining multilateralism and the risk of...