The Biden Administration has so far taken the focus of the Biden candidate on climate issues seriously, especially the commitment made during the campaign of a net zero power system by 2035. 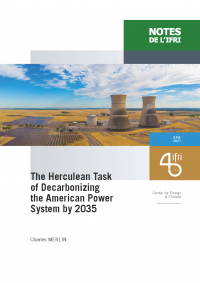 This engagement, reiterated at the April 2021 Climate Leaders’ Summit, is particularly ambitious. Indeed, even if power related carbon dioxide emissions are decreasing since 2008 in the United States (US), this has been mainly achieved thanks to the still ongoing coal to gas transition enabled by the shale revolution.

Even if wind and solar power have been contributing to last decade’s drop in emissions, deep decarbonization of power generation by 2035 will be extremely challenging, if not impossible. Indeed, renewable energy sources face physical limitations, carbon capture and storage (CCS) for power plants is far from mature and the grid itself is not ready and will need massive investments.

Even assuming a flat electricity demand, the task would be particularly difficult. Yet the rush to a net-zero economy by 2050 will push electricity demand as electrification is almost the only tool to reduce directly or indirectly emissions in most sectors like transportation, industry, or heating, no matter the gains in energy efficiency. The spread of digital technologies could also push up demand further.

Decarbonizing the grid will be a Herculean task. Heavy investment in available low carbon technologies such as onshore wind turbines and solar photovoltaics will be needed, but far from enough. A strategy based only on renewables will hit a wall as intermittency, land and material requirements and even public acceptance will probably not allow wind and solar power to satisfy more than 50% of electricity demand. This limit has already been confirmed by the National Renewable Energy Laboratory (NREL) of the Department of Energy (DOE). Moreover, experts and most stakeholders already know that storage will solve these problems only marginally. Indeed, pumped hydro and its huge direct environmental impact face low public acceptance, when batteries and hydrogen are expected to be suitable only as ultra-peakers.

The Biden Administration knows that heavy public support will be needed to trigger investments in new power generation and plans to extend tax deductions for renewable energy sources. Yet it also knows that wind and solar will not be enough and that it could face strong bipartisan opposition from the many States which would not profit from these energy sources or suffer from fossil fuels phase-out.

This is why President Biden and Energy Secretary Grandholm announced they will multiply private-public partnerships to demonstrate new technologies, especially CCS and advanced nuclear.

As every CCS power plants on the continent have been utter failures so far, nuclear has become attractive as the only firm dispatchable and clean power source that can be expected to be available and reliable.

Utilities already include advanced nuclear in the form of small modular reactors (SMR) in their resource planification. They know new nuclear will be needed to replace unabated gas power generation in the next decades. Even more, nuclear will probably be needed to phase-out coal nationally as stakeholders are looking for solutions to avoid building new gas power plants after 2025/2030 which could become stranded assets between 2040 and 2050 in a net-zero rush.

Even if the American nuclear industry is just blooming again and if most of its potential will not be available before 2030, it appears that the Federal and local governments want to accelerate the deployment of new reactors, as nuclear can be expected to become a strategical cornerstone for emissions reduction.

These initiatives will not be enough to successfully decarbonize the electricity system by 2035, which looks impossible to achieve within 14 years, but they will drive the American technological leadership on clean energy with an important export potential. This could lead the US not only to net-zero power production in the longer term but also to a net-zero economy by 2050.

The Political Economy of the Metaverse
END_OF_DOCUMENT_TOKEN_TO_BE_REPLACED
Critical minerals: How to secure stable and resilient supply chains? Views from Europe...