The United Arab Emirates (UAE) has long-standing ties with African countries, but the implementation of a genuine Africa policy dates back only about 15 years. 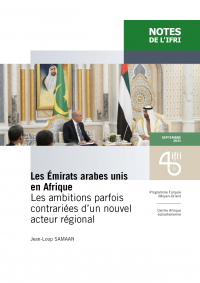 Initially instigated by the Dubai emirate, motivated by the opportunities offered on the African continent, this policy primarily served the UAE's commercial interests and responded to its food security imperatives.

The Arab Spring of 2011 has significantly shifted the focus of the UAE African policy by linking it with Abu Dhabi's foreign policy with political and military priorities. The UAE is now demonstrating an unabashed use of power in Africa, whether economic or military, to serve the international strategy of its leader Mohammed bin Zayed, for whom the fight against political Islam has become the central axis.

It is among its partners in the Horn of Africa (Eritrea, Somaliland) that the UAE has largely set up its military force, with the objective to deploy it in Yemen against the Houthi forces. At the same time, Abu Dhabi has developed close ties with the military institutions of many African countries, where it replicates its "Egyptian model" (Sudan, Mauritania) to contain the perceived threat of Islamist movements.

While the UAE aims to become a key player in the field of international diplomatic mediation (East Africa, Sahel), Emirati influence on the continent is not always well perceived. The export of Gulf rivalries to Africa and its military activism have destabilizing consequences (Somalia, Libya, Sudan) that can weaken bilateral relations (North Africa).

However, its recently diminished military ambitions in the Horn, due to its disengagement from Yemen, and the country's desire to strengthen its diplomatic reputation (notably as a future non-permanent member of the United Nations Security Council) could alter the scope of its regional policy.

The EU’s Renewables Expansion Challenge Towards 2030:...
END_OF_DOCUMENT_TOKEN_TO_BE_REPLACED
Neutrality and non-alignment after the Russian Invasion of Ukraine...