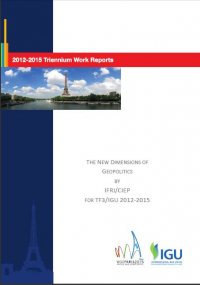 Although in any energy issue geopolitics is never far away, the unrest sweeping North Africa, Syria and Iraq, the deepening of the conflict in Ukraine in 2014 and the growing tensions between the EU and US and Russia have raised security of supply and demand to the top of the international strategic agenda. As a result, greater emphasis is being placed on diversifying energy trade patterns and developing (renewable) domestic sources. The new contract signed between China and Russia allows for the former to diversify its gas supply and for the latter to reduce its dependence on Europe. At the same time, pipeline supplies, particularly those transiting through third countries, are increasingly seen as a security risk, which has stimulated the expansion of LNG options.

The rise of security of supply and demand on the energy policy agendas of many countries is on top of the growing environmental concerns and the functioning of (domestic) energy markets appears less prominent in this context. In an increasingly interconnected world, various stakeholders, from local and international environmental groups (NGOs), to proponents of certain other energy technologies, labour organisations, multilateral institutions, academics and world media, increasingly influence policy-making at the national, supra-national and international level. Most stakeholders are active in influencing the environmental agenda, but where import-dependency or trade with specific countries is targeted for policy change, strategic interests have an increasing role. Groups often combine a variety of arguments for the climate change and security agenda in their positioning for policy change. The interplay of all these influential stakeholders adds new dimensions to the geopolitics of energy in general and natural gas in particular.

In the 2012 report on Geopolitics and Natural Gas (TF3-IGU, presented at the 2012 World Gas Conference), geo-economic and geopolitical developments and their impact on the international gas industry were discussed at length from the perspective of geopolitical power. Large geopolitical and geo-economic powers, such as the US, China, Russia and, to a lesser extent, the EU, were the point of departure for analysing the changing political and economic world order. The report additionally covered the large international economic changes taking place and their impact on the natural gas industry, as well as the influence of the shale gas revolution on international economic and political relations.

In this new report, we will briefly revisit the geopolitical scene, highlighting the geopolitical developments since the last TF3-IGU report and discussing the main areas of current geopolitical importance. Offshore border disputes, which have been identified as a common theme for a number of these areas, are further discussed in a separate theme paper on International Law and the Use of Maritime Hydrocarbon Resources[1]. The remedies in public law are explored for such maritime resources disputes, in addition to bilateral solutions, such as joint development, when international law cannot provide a solution between the contesting parties.

As a complement to this traditional approach to the geopolitics of gas, the report then continues to discuss the growing role and influence of stakeholders in the manner in which energy policies develop, adding “new dimensions” to politics and policy-making. In this context, two separate theme papers were developed to illustrate how the engagement of stakeholders can have a strong impact on the gas business. One theme paper is titled ‘Is Natural Gas Green Enough for the Environmental and Energy Policies?’ and looks at the perception of gas by policymakers, while the second one investigates ‘Local content strategies in the oil and gas sector’ and shows how the gas industry has to meet rising expectations in terms of its contribution to economic development. After identifying the key areas of the gas business in which stakeholders are the most active and have the greatest influence, this report concludes with recommendations on how the gas industry can best integrate these “new dimensions” of geopolitics.

[1] By Rene Lefeber of the University of Amsterdam.

Local Content Strategies in the Oil and Gas Sector: How to Maximise Benefits to Host Communities Presented at the World Gas Conference 2015 - Theme Paper