Towards a strategic agenda for the E3. Opportunities and risks for France, Germany and the UK Chatham House Research Paper, Europe Programme, April 2021

This paper explores how the E3 format – involving France, Germany and the UK – might develop in response to the challenges presented by the UK’s departure from the EU. The paper outlines how the trilateral format has supported policymaking to date, most notably in dialogue on Iran’s nuclear programme. 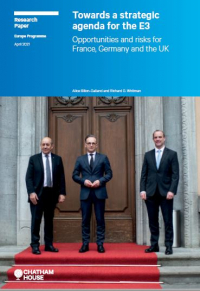 However, any effort to broaden and deepen E3 activity is now complicated by Brexit, which paradoxically makes E3 cooperation simultaneously more necessary and more difficult.

France and Germany are anxious to ensure that continued cooperation with the UK avoids undermining the EU. The dilemma for the UK is how to remain connected to EU decision-making without inadvertently being drawn into alignment with EU foreign and security policies. Rather than aiming at wider policy alignment, France, Germany and the UK are more likely to be able to develop a shared strategic agenda by identifying specific problems which they need to solve together.

The E3 could also be further ‘built out’ to include other partners on a case-by-case basis (and more is already happening with the Biden presidency through the Quad), and the paper outlines an approach to identifying specific areas on which France, Germany and the UK might further cooperate in the future.

The E3 format has its origin in the 2003 initiative of France, Germany and the UK to embark on collective negotiations with Iran over its nuclear reprocessing and enrichment activities. The E3 subsequently developed to accommodate the evolution of diplomacy with Iran to halt the country’s development of a nuclear weapons programme.1 From 2004, the E3+EU format extended participation to the EU high representative for foreign affairs and security policy, connecting EU foreign policy and the other EU member states to Iranian nuclear diplomacy. Since July 2015, the E3 has remained integral to implementation of the 2015 Joint Comprehensive Plan of Action (JCPOA), agreed between the P5+1 (the permanent members of the UN Security Council plus Germany) and Iran.

Over the years, diplomatic coordination between France, Germany and the UK in the E3 format has broadened beyond the JCPOA to address other international security issues. This has generally taken place on an ad hoc basis and through joint declarations. Issues in the Middle East have been a notable area of E3 collaboration (for example, the conflict in Syria, the events in the Golan Heights and the killing of the Saudi journalist Jamal Khashoggi).2 Other issues have included freedom of navigation in the South China Sea and instability in the Sahel.3

However, the UK’s withdrawal from the EU means that the E3 now exists in a different context from that of the early 2000s. It no longer brings together the EU’s ‘big three’ players, nor does it act as a vanguard for foreign policy initiatives that can be presented to the other member states. The decision of the British government not to pursue an agreement on cooperation on foreign, security and defence policy within the December 2020 EU–UK Trade and Cooperation Agreement also means that there is currently no formal relationship in this area between London and Brussels. Consequently, alongside NATO’s North Atlantic Council and bilateral/minilateral cooperation, the E3 provides an important format for regular foreign and security policy consultations between Europe’s key diplomatic players.

This research paper explores the opportunities and challenges for continuing cooperation in the E3 format, as well as the prospects for a shared strategic agenda for France, Germany and the UK in this new context.4 It examines whether the E3 might be repurposed in a manner that both (a) addresses the concerns of France and Germany to ensure that cooperation with the UK does not undermine the EU, and (b) keeps London connected to decision-making on shared European foreign and security concerns and actions in a mutually beneficial way. The authors argue that a pragmatic, issue-oriented approach should be adopted towards future E3 cooperation. This would involve setting ambitious yet realistic objectives for the extent of collective action by the three countries. It would also recognize the political limits on cooperation in the format, as well as the crucial need for continued trilateral engagement.

About the authors
Alice Billon-Galland is a research fellow with the Europe Programme at Chatham House, and one of the 14 NATO Young Leaders selected by Secretary General Jens Stoltenberg to advise the NATO 2030 process. Alice’s research focuses on issues linked to European security (inclusive of transatlantic relations), the EU and NATO, with a particular focus on French and British foreign and defence policies as well as post-Brexit security cooperation. Prior to joining Chatham House in October 2019, she led the European defence programme at the European Leadership Network (ELN). A graduate of France’s Ecole Normale Supérieure and the holder of an agrégation in English language, Alice completed a master’s degree in public policy at University College London and was a visiting scholar at Northwestern University in Chicago.

Professor Richard G. Whitman is an associate fellow of the Europe Programme at Chatham House. He is also currently the director of the Global Europe Centre and a professor of politics and international relations at the University of Kent. Previously, he was a visiting senior fellow (2015–16), senior fellow (2006–07) and head of the Europe Programme (2004–06) at Chatham House. He is the author and editor of 11 books, and has published over 60 articles and book chapters, on European integration and UK foreign and security policy. His current research interests include the external relations and foreign and security and defence policies of the EU, and the governance and future priorities of the EU. Professor Whitman is a regular media commentator, working with print and broadcast media at home and overseas.

This research paper is part of a project exploring challenges and opportunities associated with the E3 format. The insights from a workshop with subject matter experts and officials, organized by Chatham House on 27 January 2021, and additional discussions with relevant stakeholders provided helpful input for this paper.

The authors and Chatham House gratefully acknowledge the financial support from the Hanns Seidel Foundation for this project. The views expressed in this paper do not necessarily reflect the positions of the foundation, or those of the Federal Republic of Germany.

The authors would like to thank two anonymous peer reviewers as well as colleagues at Chatham House for their invaluable comments, suggestions and edits. In particular, thanks go to Hans Kundnani and Jake Statham at Chatham House, and to Nick Bouchet for freelance editing support.

The authors would also like to thank Eric-André Martin at the Institut français des relations internationales (IFRI) and Christian Mölling at the Deutsche Gesellschaft für Auswärtige Politik (DGAP) for their collaboration on this project.

This is the first publication in a new joint project between Chatham House, the Institut français des relations internationales (IFRI) and the Deutsche Gesellschaft für Auswärtige Politik (DGAP). Supported by the Hanns Seidel Foundation, the project aims to establish a constructive policy debate on the challenges and opportunities associated with the E3 format, and to provide actionable policy recommendations for meaningful E3 cooperation. This research paper presents the results of the first phase of this initiative, under the direction of Chatham House. Ifri will lead the second phase of the initiative, which will focus on cooperation possibilities in the Indo-Pacific.

> This research paper is published by Chatham House