According to a 2008 estimate, the Arctic hosts approximately 412 billion barrels of oil equivalent of conventional oil and gas resources. And since then, following the so-called shale revolution and technology improvements, numbers have gone even higher. 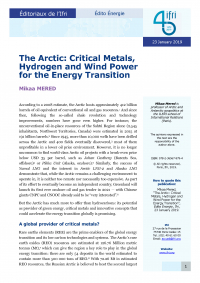 For instance, the unconventional oil-in-place resources of the Sahtú Region alone (2,545 inhabitants, Northwest Territories, Canada) were estimated in 2015 at 191 billion barrels. Since 1945, more than 10,000 wells have been drilled across the Arctic and 400 fields eventually discovered, most of them unprofitable in a lower oil price environment. However, it is no longer uncommon to find world-class Arctic oil projects with a break-even price below USD 35 per barrel, such as Johan Castberg (Barents Sea, offshore) or Pikka Unit (Alaska, onshore). Similarly, the success of Yamal LNG and the interest in Arctic LNG-2 and Alaska LNG demonstrate that, while the Arctic remains a challenging environment to operate in, it is neither too remote nor necessarily too expensive. As part of its effort to eventually become an independent country, Greenland will launch its first ever onshore oil and gas tender in 2021 — with Chinese giants CNPC and CNOOC already said to be “very interested”.

But the Arctic has much more to offer than hydrocarbons: its potential as provider of green energy, critical metals and innovative concepts that could accelerate the energy transition globally is promising.

A global provider of critical metals?

Rare earths elements (REE) are the prime enablers of the global energy transition and its low carbon technologies and systems. The Arctic’s rare earth oxides (REO) resources are estimated at 126.76 Million metric tonnes (Mt), which can give the region a key role to play in the global energy transition: there are only 54 deposits in the world estimated to contain more than 500 000 tons of REO. With 72.26 Mt in estimated REO resources, the Russian Arctic is believed to host the second largest REE potential in the world (after China’s 161.13 Mt). Greenland and the Canadian Arctic, respectively with 41.69 Mt and 14.31 Mt, rank fifth and sixth. Swedish Lapland makes it to the top 10, too.

In addition to all these onshore deposits, the Arctic’s seafloor also generates interest. The Norwegian Petroleum Directorate (NPD) considers extending the country’s extractive activities to subsea REE mining. NPD has so far identified promising manganese crusts on the Jan Mayen Ridge (east of Greenland), the Vøring Spur (central Norwegian Sea), and up on the Yermak Plateau (Arctic Ocean, north of Svalbard). One group of such crusts has at least twice the amount of lanthanides found in Pacific and other Atlantic sources. Also, studied groups contain 20 to 80 times as much lithium and 4 to 7 times as much scandium as similar crusts in the Pacific and Atlantic.

A global provider of green hydrogen?

There is a green rent that Arctic countries could develop and benefit greatly from in the next decade: green hydrogen (H2).

Hydropower is well developed in all areas of the Arctic, with more than 80 GW of power installed all across the region and electricity systems dominantly powered by hydropower. The current surplus generated and the still untapped potential in Iceland and Norway actually led both countries to consider producing green hydrogen and develop global supply systems. Japanese and Norwegian fuel cells and hydrogen (FCH) actors already work together on developing green hydrogen solutions based on hydropower and wind electricity. Co-funded by the Research Council of Norway and run by SINTEF, the “Hyper project” brings together Norway’s Nel Hydrogen, Equinor, and Gassco, Japan’s Kawasaki Heavy Industries and Mitsubishi, as well as Shell and Switzerland’s Linde Kryotechnik. “Hyper” investigates the “valorization of Norwegian renewable and fossil energy resources”: that is, green H2 made out of renewable energy, but also out of fossil fuels as CO2, a by-product from hydrogen production from natural gas, would be captured and stored. This could pave the way for an “International H2 supply chain” by 2030. Likewise, SINTEF states that, by 2025, 2 GW of onshore stranded wind power in Finnmark (Norwegian Arctic), producing 8 TWh per annum, could be converted into hydrogen, fueling more than 1 million passenger vehicles. Moreover, H2 could be shipped straight from Finnmark to Japan via the Arctic sea route.

Meanwhile, Icelandic actors have begun their own project: “ON Power”, located at the Hellisheiði Geothermal Power Plant, with co-funding from the European Union. Along the same lines, in 2017, Norway’s Nel established a joint venture with Skeljungur HF. Named “Icelandic Hydrogen”, this JV aims at building a nation-wide network of renewable hydrogen production and refueling stations in Iceland.

A pillar of the Global Energy Interconnection?

Beyond resources per se, the Arctic could also be seen as a global energy transition accelerator from an infrastructure perspective, too! This idea is at the heart of the Global Energy Interconnection (GEI) project: a world-scale electrical smartgrid promoted by State Grid Corporation of China (SGCC) that consists in a network of continent-sized Ultra High Voltage (UHV) electrical grids covering all continents but Antarctica, all interconnected to one another, in the Arctic, by 2050. Developed by SGCC, and validated in 2016 by the International Standards Organization’s International Electrotechnical Commission’s Market Strategy Board (IEC-MSB), GEI would notably rely on “Arctic energy bases”, a limited number of giant wind farms connecting the continental grids from the East to the West.

In Zhenya LIU’s original assessment, the Arctic could contribute to GEI for up to 600 TWh per year of clean wind energy. Arctic wind resources are excellent and well distributed across the region to serve as a backbone for the whole network: up to 11 meters/second (m/s) in Greenland and northern Iceland, 10 m/s in the Norwegian Sea, 9 m/s in the Bering Strait area, 8 m/s in Russia’s Nova Zembla and Kara Sea. Also, Canada has an annual wind speed of over 7 m/s in more than half of its territory.

GEI is a long distance prospect and is not supported at this point by any major private and public Arctic stakeholder. Yet the low tensions between local stakeholders might make the region an ideal candidate to become the main backbone of the whole GEI project. For the time being, GEI provides China with another soft way into the Arctic game —one that involves innovation, norm-setting, inclusiveness and cooperative approaches.

For the time being and the foreseeable future, REE and green hydrogen from the Arctic seem like robust bets for the global energy transition.

The Political Economy of the Metaverse
END_OF_DOCUMENT_TOKEN_TO_BE_REPLACED
Critical minerals: How to secure stable and resilient supply chains? Views from Europe...