The Battle Heats Up: Climate Issues in the 2020 US Presidential Election Édito Énergie, December 2019

Environmental issues have frequently enjoyed bipartisan support in American history: the Clean Air Act was enacted in 1963 under Democratic President Johnson, and the Environmental Protection Agency (EPA) was established in 1970 under Republican President Nixon. 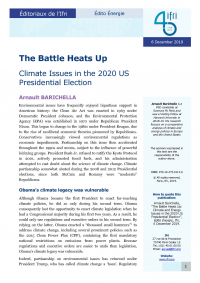 The Battle Heats Up: Climate and Energy Issues in the 2020 US Presidential Election Download
0.13 Mo

This began to change in the 1980s under President Reagan, due to the rise of neoliberal economic theories pioneered by Republicans. Conservatives increasingly viewed environmental regulations as economic impediments. Partisanship on this issue then accelerated throughout the 1990s and 2000s, subject to the influence of powerful lobbying groups. President Bush Jr. refused to ratify the Kyoto Protocol in 2001, actively promoted fossil fuels, and his administration attempted to cast doubt about the science of climate change. Climate partisanship somewhat abated during the 2008 and 2012 Presidential elections, since both McCain and Romney were ‘moderate’ Republicans.

Although Obama became the first President to enact far-reaching climate policies, he did so only during his second term. Obama consequently lost the opportunity to enact climate legislation when he had a Congressional majority during his first two years. As a result, he could only use regulations and executive orders in his second term. By relying on the latter, Obama enacted a ‘thousand small hammers’ to address climate change, including several prominent policies such as the 2015 Clean Power Plan (CPP), containing the first mandatory national restrictions on emissions from power plants. Because regulations and executive orders are easier to undo than legislation, Obama’s climate legacy was vulnerable.

Indeed, partisanship on environmental issues has returned under President Trump, who has called climate change a ‘hoax’. Regulatory rollback has characterized his presidency, with notorious climate change deniers such as Pruitt and Wheeler appointed to head the EPA, and a number of Republicans returning to rigid climate denialism. In June 2017, Trump announced his decision to withdraw the United States (US) from the historic Paris Agreement, which the Obama administration played a key role negotiating. In June 2019, the CPP was replaced by the much weaker ‘Affordable Clean Energy rule’, giving states wide latitude to mostly do as they please.

Democrats compete for the most prominent climate action plan

Outrage at the policies of the Trump administration, as well as increasingly severe weather events, have combined to make climate change one of the top priorities for progressive voters. Already, climate issues featured prominently in several races during the 2018 mid-term elections. The trend has accelerated since then, due in part to the irrefutable scientific consensus highlighted by the latest Intergovernmental Panel on Climate Change (IPCC) Report. For example, a major poll conducted last April showed that within a list of 29 important topics for registered voters, environmental protection ranked second and climate change third in level of priority for liberal Democrats, just behind healthcare, and it ranked fifth and eight respectively for moderate Democrats, an important leap from just one year ago.

In defiance of the Trump administration, states like California and New York have recently enacted some of the most ambitious climate legislation in the world, and Congressional Democrats proposed the far-reaching ‘Green New Deal’ in February 2019, which aims to transition the US economy out of fossil fuels. This momentum has carried into the 2020 Democratic Presidential primary, which represents an unprecedented situation since climate change has never been a salient topic in any Presidential campaign up until now. Obama was cautious and mostly referred to his climate policies as a way to boost the economy during the 2008 and 2012 campaigns. Likewise, although Hillary Clinton’s manifesto did contain some innovative policy proposals, climate change was hardly mentioned during the 2016 Presidential debates with Trump, and only Sanders brought up the issue during the Democratic primary that year.

This time around, most Democratic candidates have offered far-reaching and detailed climate policy platforms. Rejoining the Paris Agreement on day one and embracing the Green New Deal have become the bare minimum. In fact, several candidates such as Sanders, Warren and Steyer have officially placed climate change as one of their top priorities. Even more remarkable, former candidate Inslee chose to base his entire campaign on climate change, releasing the most comprehensive climate policy blueprints ever proposed in US political history. This has created a singular situation within the Democratic primary, where an undeclared but apparent competition for the most prominent climate action plan is underway, putting pressure on all candidates to raise their level of ambition.

Due to grassroots activism, former Vice President Biden was forced to backtrack on his initial ‘middle ground’ climate proposal, releasing a new much more ambitious plan involving $1.7 trillion of climate related spending to compete with other Democrats. Likewise, a majority of candidates have participated in a green fundraising platform and most of them, including Biden, have signed a pledge not to accept any donations from fossil fuel interest groups. While the Democratic National Committee turned down a proposal to organize the first-ever climate focused debate, CNN agreed to host a ‘climate town hall’ last September involving ten of the main candidates. This helped to underscore how even though most Democrats have a number of policy proposals in common, such as achieving 100% clean energy and reaching carbon neutrality by mid-century at the latest through more regulation and carbon pricing, they have also tried to distinguish themselves in this field.

For example, Warren has offered an original climate plan for the military and supports a carbon tax with a ‘climate adjustment fee’, Booker has set out noteworthy environmental justice goals, Buttigieg has focused on reforming farming techniques and soil management, and Yang has emphasized climate geo-engineering solutions. Furthermore, Bloomberg’s late entrance into the Democratic primary has further enhanced these trends, due to his long-standing commitment to environmental issues and his leadership in supporting sub-national climate initiatives under Trump.

The most remarkable shift in the 2020 Presidential race, however, has come from the Republican side. Polls indicate that public opinion on climate change has begun to evolve among moderate Republicans, whose vote will be essential if Trump is to move beyond his base and increase his chances of re-election. This is partly because Republican-voting areas have been hit by increasingly severe weather events in states such as Texas, Florida or in the Midwest. For example, 68% of registered moderate Republican voters now believe that global warming is happening, 55% agree that it is mostly caused by human activity, and 58% say they are worried about it, a substantial jump from previous years. This has put pressure on the Republican Party, and even Trump himself, to look for ways of reframing their discourse in order to appeal to moderate conservatives and young voters. Several prominent Republicans, including key Trump allies like Senator Graham, have begun to push for the adoption of a new position on climate change to counter the Democrats’ Green New Deal. Republican Senator Barrasso has advocated a policy of ‘innovation over regulation’, involving the promotion of ‘clean’ fossil fuels.

However, the reality is that this represents little more than a smokescreen. While greenhouse gas (GHG) emissions in the US slightly declined during Trump’s first year in office, they sharply increased in 2018 by 2.8%, thus reversing a trend of continuous decline over the last few years. Furthermore, a clear majority of Republicans, under pressure from fossil fuel lobbying groups, remain skeptical about climate change. While he now claims to care about some environmental issues, Trump continues to deny the science of climate change, and has lambasted the Democrats’ climate proposals, including on renewable energies, as unrealistic and harmful to the economy. Likewise, the environmental policies certain Republicans now claim to endorse in preparation for the 2020 electoral cycle are no substitute for those proposed by Democrats; in fact, they represent substantial setbacks in many cases.

Trump has encouraged the shale gas revolution begun under Obama, since natural gas only emits around half the amount of CO2 compared to coal in power generation. The problem is that, while Obama tried to boost shale gas through appropriate regulations, Trump has cut back on allegedly burdensome methane rules. As a result, methane leakage rates have reached new heights under his presidency. Secondly, former Energy Secretary Perry had set out a ‘real’ Green New Deal that included the promotion of nuclear energy, which is nearly carbon-free. In 2018, Trump signed the Nuclear Energy Innovation Capabilities Act to assist the fledging US civil nuclear sector, which included support for new generation reactors that emit less radioactive waste. Once more however, this has come with the rollback of regulations and upgrades enacted following the 2011 Fukushima incident. Recent studies have indicated that a majority of US nuclear plants are currently ill equipped to withstand extreme weather and flooding. Finally, Trump has tried to hone his environmental message to voters by boasting about the ‘clean coal renaissance’ he has been promoting. Several innovative technologies such as carbon capture use and storage (CCUS) can help make coal cleaner. While Trump’s administration initially rolled back Obama era rules requiring new coal plants to rely on carbon capture, it then came round in 2019 by officially supporting funding and research to develop this technology. Although the latter is a positive step that has stimulated bipartisan interest, the reality is that CCUS is currently too expensive, not effective enough and hard to install. It is still a long way from being ready to be launched on a large commercial scale, and Trump’s tax credits are insufficient to unleash its full potential. As a result, Democrats were quick to point out during debates that Trump has largely failed to enact his ‘clean coal renaissance’, since coal’s decline has in fact accelerated under his Presidency due to competition from cheaper shale gas and renewables. Coal was even surpassed by renewables as a source of power generation in the US for the first time in 2019. According to the latest data, the latter may have contributed to a slight drop in US emissions of about 1.7% this year (insufficient to offset the 2.8% increase in 2018, however).

In conclusion, regardless of the outcome, the 2020 Presidential election is likely to go down in history as the first time when climate change became a prominent issue in US politics. Democrats are likely to continue criticizing Trump, putting pressure on some Republicans to develop their discourse of ‘innovation over regulation’ to appeal to moderate conservatives; in parallel, Republicans will probably maintain their attacks on Democrat climate proposals as irresponsible and damaging for the economy. Given that the Senate race appears to favor conservative incumbents in 2020, a Democratic victory in the Presidential race would not necessarily transform the political situation, at least not immediately, since liberals would need a majority in both Houses to enact far-reaching climate legislation. By contrast, despite a slight change in rhetoric, Trump is unlikely to change his policies if reelected, and his modest support for nuclear energy and CCUS technologies would remain insufficient. Thus, his second term would probably be characterized by further regulatory rollbacks to consolidate US fossil fuel energy dominance.

How Can American Democracy Be Fixed?
END_OF_DOCUMENT_TOKEN_TO_BE_REPLACED
The Digital Levy and the OECD Tax Negotiations...