Russia-Ukraine Gas Relations: The Mother of All Crises or a New Start to 2030? Edito Energie, April 2019

Ten years after the January 2009 gas crisis, Russian-Ukrainian gas relations are at another turning point: the then concluded contracts are terminating on 31 December 2019. While trilateral talks brokered by the European Commission (EC) have started in July 2018, the real negotiations about the future of this relationship can be expected to start no earlier than in December, that is in the midst of the winter and a second to midnight. Crucial months lie ahead. 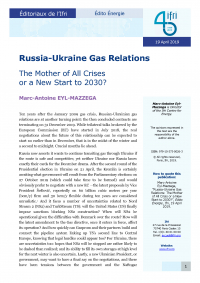 Russia-Ukraine Gas Relations: The Mother of All Crises or a New Start to 2030? Download
0.69 Mo

Russia now asserts it wants to continue transiting gas through Ukraine if the route is safe and competitive, yet neither Ukraine nor Russia know exactly their cards for the December drama. After the second round of the Presidential election in Ukraine on 21 April, the Kremlin is certainly awaiting what government will result from the Parliamentary elections on 27 October 2019 (which could take time to be formed) and would obviously prefer to negotiate with a new EC —the latest proposals by Vice President Šefčovič, reportedly on 60 billion cubic meters per year (bcm/y) firm and 30 bcm/y flexible during ten years are considered unrealistic. And it faces a number of uncertainties related to Nord Stream 2 (NS2) and TurkStream (TS): will the United States (US) finally impose sanctions blocking NS2 construction? When will NS2 be operational given the difficulties with Denmark over the route? How will the latest amendment to the Gas directive, once it enters in force, affect its operation? And how quickly can Gazprom and their partners build and connect the pipeline system linking up TS’s second line to Central Europe, knowing that legal hurdles could appear too? For Ukraine, there are uncertainties too: hopes that NS2 will be stopped are rather likely to be dashed than realized; and its ability to fill its own storages at high level for the next winter is also uncertain. Lastly, a new Ukrainian President, or government, may want to have a final say on the negotiations, and there have been tensions between the government and the Naftogaz management in past months. Meanwhile, Gazprom is a clear winner: this uncertainty is expected to drive demand for Russian gas in the coming months for maximum storage injections in Europe.

In a scenario where NS2 is being built on schedule, Russia may calculate that it can win in a no transit scenario post 1 January 2020 and has the upper hand in negotiations: there could be enough gas in Europe’s storages to cope with an average winter and its customers in North West Europe would continue receiving gas via Nord Stream and Yamal-Europe. So would Turkey. With new Liquefied natural gas (LNG) export capacities coming on line in the US, rising US LNG exports to Europe, Yamal LNG’s three trains and the current low Asian prices, there could also be a lot of LNG available to complement pipeline imports into Europe. The interruption of transit would also test the functioning of EU’s security of supply regulation and market integration measures which should mitigate impacts. Most contracts would be unaffected and prices would rise if the winter is very cold, offsetting possible revenue impacts from lower exported volumes. Algeria, which has recently reinforced its pipeline system and added production capacity, might be able to pump more to ease Italy’s position. And while that situation can last a few months, NS2 would be commissioned and ramped up (under the amended Gas directive, pressure to allow that it remains operational while certification is pending would be strong), and so would the prolongation of TS’s second line. Russia could seek to limit political impacts: it would blame Ukraine for its shortcomings (delayed unbundling & lack of certification of the Transmission system operator - TSO) and for having unacceptable conditions. And Russia could assume the EU, and Germany, are so desperate for Russian gas in the coming decade, following the partial coal phase out, nuclear closures and falling EU gas production, that they would simply bow to Russia’s fait accompli.

That scenario has its drawbacks: Italy, Hungary, Moldova, Serbia could notably face supply shortages if the winter is harsh. US LNG could be pushed to European markets (10% of EU’s 2018 LNG imports), pleasing Trump and lowering Gazprom’s market share. The case for Germany’s planned LNG import terminals, to be commissioned in the coming years, would be strengthened. China might be at odds from a crisis that could affect Asian LNG prices at times when its economy is weakening and when it needs to buy spot LNG cargoes, even if Power of Siberia starts small deliveries. Delays in Ukraine’s gas market reforms are not obstacles to signing a new contract.

More fundamentally, the damage to the European gas industry could be devastating: gas could become a toxic fuel, poisoned by its carbon and geopolitical footprints. Policymakers would have to react as the competitiveness of EU’s industry and purchasing power of consumers would be strained. Germany would have lignite power plants running full steam and might delay its coal phase out. Nuclear would see its role reinforced, especially in Belgium and greater efforts would be paid to energy efficiency. Efforts to tap the East Mediterranean and Algerian gas supply potential would be fostered, alongside the development of green gases. Lastly, this could trigger an activation of provisions from the 2014 Ukraine Freedom Support Act.

Ukraine, too, must avoid miscalculations when laying out its demands. Gazprom and Naftogaz are still involved in fierce arbitral disputes which will be long to end. There can only be unconditional support from every European government and industry stakeholder for the imperious need to obey arbitrage rulings. Gazprom and the Kremlin rejected the Stockholm arbitration sentences (whereby Gazprom owes a total of USD 2.56 billion without interests to Naftogaz). Gazprom has initiated an appeal while Naftogaz has engaged procedures to seize Gazprom’s assets. There is no alternative for Gazprom than paying if the appeal is turned down, which investors and banks would otherwise sanction – and the Russian state should not interfere here. That being said, Russia has made clear that there is no way any new agreement can be concluded if Naftogaz maintains its additional arbitration claim pertaining to the accelerated amortization of its gas transportation system introduced in July 2018 and the related USD 11.58 billion compensation claim for underpaid transit services. This implies the claim would need to be dropped. Naftogaz has yet only stated that the claim could be reduced to USD 2 billion, provided there is a long term capacity booking.

Gazprom can be expected to refuse the current transport tariff proposed by Naftogaz and adopted by the Ukrainian regulator, roughly consisting in paying much more than currently if capacity reservations are short term with low volumes, and conversely, significantly less if long term and with high volumes. Realism must prevail: if NS2 and TS are built, Gazprom will fill these pipelines up to the maximum physical or regulatory level. Ukraine’s maximum tariff should reasonably be below the transportation cost through NS2 to Greifswald plus the additional onwards costs to Italy, minus transportation costs from Slovakia to Italy. This is de facto a nuance compared to claims that Ukraine’s route must be competitive with NS2, but also a limit to Ukraine’s own demands. Having invested dozens of billions into alternative routes, Gazprom’s can be expected to refuse to pay a tariff that enables to fund the restructuring of Ukraine’s entire system, nor to support the Ukrainian budget. Moreover, Gazprom could well add the Baltic LNG project and additional lines to TS if the Ukraine route is too expensive. Hence why further adjustments to the transportation tariffs are needed alongside assurances that the regulator is independent and will not change tariffs randomly. Having a fully certified, professional TSO in Ukraine with the involvement of European TSOs, as is currently prepared for, are positive steps in this direction.

Ukraine’s transit role nonetheless can remain significant for the next ten years as gas demand in the EU is expected to remain steady while import needs will rise towards 2025, most likely covered by Gazprom and LNG. Yet there will be strong variations over time and seasonality. While Ukraine will no more be the main corridor (it shipped 87 bcm in 2018 and TS line 1 will already reduce volumes by 15 bcm/y), it would offer a bridging solution until NS2 and TS are built/loaded – handling 50 to 70 bcm in 2020-2021. It would offer back up should they go into maintenance for example or face technical failures. It would provide flexibility for winter supplies and for the specific needs of EU’s energy transition. It could provide an attractive route to supply « hard to reach markets » for Gazprom’s new pipelines: Italy, Moldova, Hungary, Croatia for example, especially if for regulatory reasons, NS2 is not fully loaded. Ukraine will thus remain an asset for the security of Russia’s gas exports to Europe. This also means that it is a reasonable demand that Gazprom offers conditions that allow for a business case for the modernization of the Urengoy-Pomary-Uzhgorod (UPU) corridor, that is a longer term, credible ship or pay contract that can underpin a viable, soft modernization investment and involvement of European TSOs.

Lastly, while it is important for Ukraine to prepare for a transit cut, the country should not overestimate its ability to withstand such a situation, especially if it is lasting long. Ukraine would need a very large amount of gas to be stored in the coming months ahead of the winter – relatively low prices currently could facilitate that. It would then face difficulties sourcing the 10 bcm/y it is still importing via reverse flows as its domestic production increase, which is costly, has been facing delays. It would also possibly face difficulties in maintaining pressure in its system so that several regions could face gas shortages.

A reasonable compromise is possible

In December, parties may well not come to an agreement. By mid-January 2020, once the Orthodox holidays are over and following a few high level phone calls, they could reconvene, to either continue to disagree, or lay out a temporary « winter package » type agreement prolonging current contracts without any take or pay or ship or pay, which Gazprom has reportedly hinted at. Or Gazprom could decide to move to day ahead or year ahead capacity reservations, paying a higher tariff if in line with European methodologies and levels but not committing to any longer term volumes. This would nonetheless require an interconnection agreement to be signed between the two sides, and could lead to pipeline pressure disputes. A five-year agreement would offer some flexibility to Gazprom while still being possibly tempting for Ukraine’s leadership – in line with the duration of the presidential and parliamentary mandates – yet would make any modernization investment hardly feasible.

A sustainable compromise solution could possibly include: