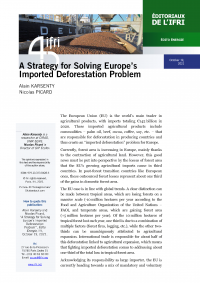 Currently, forest area is increasing in Europe, mainly thanks to the contraction of agricultural land. However, this good news must be put into perspective by the losses of forest area that the EU’s growing agricultural imports cause in third countries. In post-forest transition countries like European ones, these outsourced forest losses represent about one third of the gains in domestic forest area.

The EU case is in line with global trends. A clear distinction can be made between tropical areas, which are losing forests on a massive scale (-10 million hectares per year according to the Food and Agriculture Organization of the United Nations – FAO), and temperate areas, which are gaining forest area (+5 million hectares per year). Of the 10 million hectares of tropical forest lost each year, one third is due to a combination of multiple factors (forest fires, logging, etc.), while the other two-thirds can be unambiguously attributed to agricultural expansion. International trade is responsible for about half of this deforestation linked to agricultural expansion, which means that fighting imported deforestation comes to addressing about one-third of the total loss in tropical forest area.

Acknowledging its responsibility as large importer, the EU is currently heading towards a mix of mandatory and voluntary rules to tackle imported deforestation. A legislative proposal will be unveiled by the European Commission in December and other initiatives support these efforts, such as the Amsterdam Declarations Partnership bringing together nine European countries. In addition, some countries like France have already set up national strategies to combat imported deforestation. Stars are finally aligned to move forward with concrete plans on imported deforestation.

A pre-requisite: you can only manage what you can measure

Combating imported deforestation means knowing how to quantify and monitor the phenomenon. Tropical wood from Africa can pass through China, where it is processed before being imported into Europe. Therefore, complex traceability chains must be set up, with the support of customs and private intermediaries in the sector.

In addition, there are questions of timing. At what point can deforestation be considered “prescribed” and the products from this area disconnected from deforestation (the so-called “cut-off” date)? Should Ivory Coast cocoa from cocoa farms that replaced forests destroyed in the 2000’s still be counted as a liability for imported deforestation?

Another fundamental question arises. What is meant by the term “forest cut-off” date underpinning the very concept of deforestation? The technical definition of a forest (distinct from its legal definition) is roughly based on two notions: land use and tree cover. A piece of land can have a forest use with no tree cover (just after a forest fire) and, conversely, a piece of land can have a closed canopy without having a forest use (an oil palm plantation).

It is also necessary to introduce the concept of forest degradation. Forest degradation is defined as the reduction in the capacity of the forest to provide goods and services, which is reflected in a reduction in tree biomass density. Countries define forests by setting their own tree cover thresholds. This results in several hundred definitions. When addressing imported deforestation, the choice of this threshold is critical. If it is low, heavy forest degradation can occur without this transformation being qualified as deforestation. If it is high, the conversion of vegetal formations that have all the ecological characteristics of forests into agricultural land might not be considered as deforestation.

Many sustainable production activities, such as selective logging, lead to forest degradation. However, with good forest management, this degradation can be limited and reversible. The same applies to certain forms of agroforestry (such as cocoa under forest shade) or the collection of firewood in dry forests. The challenge, then, is not to avoid all degradation, but to control the factors behind and keep degradation within sustainable limits. Regulatory frameworks (and independent certification schemes) must be mobilized for this purpose.

At first glance technical, the different issues refer to normative choices and the first task for policymakers will be to decide on these crucial matters.

Adopted in 2018, the French national strategy to combat imported deforestation mentions the need to include the issue of deforestation in trade agreements and stresses the need to “assess the feasibility of setting up incentives for sustainable raw materials”.

With these objectives in mind, we believe it is necessary to distinguish between illegal and legal deforestation, building on the EU Timber Regulation (EUTR) which has banned the import of illegally harvested timber. In terms of political feasibility, differentiating between legal and illegal is easier than boycotting agricultural production associated with deforestation that is considered legal in the producing country but deemed environmentally problematic. If legal agricultural production is banned, the EU would be exposed to trade retaliation risks and would likely face trade discrimination complaints before the World Trade Organization (WTO).

Ideally, producing and importing countries should agree on common forest definitions (adapted to each biome) and on cut-off dates after which deforestation cannot be prescribed. Yet, this would be a long and difficult process.

It seems more realistic to ban the imports of agricultural products from illegal deforestation and to modulate tariffs according to the information and guarantees that the actors in the sector provide to ensure that their production is “zero-deforestation”. First, we can draw inspiration from the EUTR, which imposes due diligence obligations on importers to ensure that the wood they market does not come from illegal sources. As a complement, differentiated tariffs should be introduced based on independent certifications that include zero-deforestation criteria. These certifications would be accredited by public authorities and subject to a continuous evaluation process. Switzerland has just paved the way via an agreement with Indonesia that lowers customs tariffs up to 40% for certified palm oil (three standards approved).

The current lack of zero-deforestation certification for some commodities could be a hurdle, but the situation is changing fast. Since 2018, certifications such as Roundtable on Sustainable Palm Oil (RSPO) or Rainforest Alliance (cocoa and other commodities) have integrated such criteria. It is a fair assumption that certifications will follow suit and companies’ demand will be much more pressing if the prospect of differentiated taxation at the EU’s borders becomes clear.

For public authorities, this would be a way of driving the evolution of private certification, insofar as they could label those that integrate a zero-deforestation approach corresponding to European criteria and whose verification mechanisms are deemed credible. Beyond zero-deforestation criteria, certifications also address other important issues related to wildlife conservation, social dimensions, fair remuneration for small-scale producers, gender, etc.

Yet, the Achilles' heel of several certification schemes remains the risk of auditors (the private certification bodies) being “captured” by the companies that select and remunerate them. To some extent, the assessment of sustainability criteria remains subjective, and companies tend to select auditors known for their complacency and avoid the stricter ones. However, public authorities can require certification schemes to find solutions for ensuring a better independence of the auditors. This can be done through continuous performance evaluation and conditional reaccrediting. For instance, an accredited certification body can be attributed randomly instead of being selected by the company.

Designing a fair measure for small producers of the South

In all cases, importers will have to comply with the legal requirement for due diligence and ensure that the product is not associated with illegal land conversion. Risk management information systems will be useful: an importer may decide not to source from a risk area. If the information is insufficient and the import goes ahead, the importer will not only have to fulfil its due diligence obligation but also to demonstrate that its product can be labelled “zero-deforestation”. Otherwise, they will not benefit from a favorable customs tariff.

The logical sequence would be as follows:

The problem is that many tariffs have 0% rates (such as soy, natural rubber, or cocoa). Introducing a fiscal differential between zero-deforestation products and others will require an increase in some tariffs, and thus a review of existing and future bilateral trade agreements. While a unilateral increase in certain tariffs could be challenged at WTO level, there is room for maneuver based on the GATT Article XX General Exceptions agreement (protection of human, animal or plant life or health, conservation of exhaustible natural resources), if the principle of non-discrimination (between “similar” products from different trading partners) is respected. The additional fiscal revenues could also be used to fund programs helping small-scale producers in exporting countries to move towards sustainable practices and become certified. In addition, individual certification might not be the only instrument. Group certification and territories labelled “zero-deforestation” can be part of the policy instruments.

Such an allocation of additional fiscal receipts to producing countries in proportion to the taxes collected on their imports would refute accusations of protectionism and provide a “good faith” basis for defending this measure before the WTO. And as with all ecological taxation mechanisms, the aim would be for the yield of this import tax to decrease, i.e., the EU would eventually only import certified zero-deforestation products subject to the most favorable customs tariffs.