The energy sector is one where the break between the Trump and Obama administrations is the most pronounced. The three officials in charge, Rick Perry at the Department of Energy (DoE), Scott Pruitt at the Environmental Protection Agency (EPA) and Ryan Zinke at the head of the Department of the Interior (DoI), share the same indifference to the issue of climate change, the same will to encourage oil and gas production in the USA in order to bring an era of American “energy dominance”, the same desire to promote the extraction of “beautiful, clean coal”, to paraphrase President Trumps’s State of the Union address, and the same deep mistrust of renewable energies such as wind and solar. 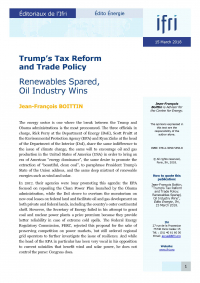 In 2017, their agencies were busy promoting this agenda: the EPA focused on repealing the Clean Power Plan launched by the Obama administration, while the DoI strove to overturn the moratorium on new coal leases on federal land and facilitate oil and gas development on both private and federal lands, including the country’s outer continental shelf. However, the Secretary of Energy failed in his attempt to grant coal and nuclear power plants a price premium because they provide better reliability in case of extreme cold spells. The Federal Energy Regulatory Commission, FERC, rejected this proposal for the sake of preserving competition on power markets, but still ordered regional grid operators to further investigate the issue of resilience. And while the head of the EPA in particular has been very vocal in his opposition to current subsidies that benefit wind and solar power, he does not control the purse: Congress does.

The tax reform is finally not hitting the renewable energy industry

The tax reform was an opportunity for the administration to “level the playing field”, i.e. get rid of subsidies for renewable installations and clean mobility. That explains the anxiety among the supporters of renewable energy sources about the potential impact of the process. The version that was passed by the House indeed suppressed the federal tax credit for electric vehicles, and cut both the wind and solar Production Tax Credit and Investment Tax Credit (ITC). However, this victory for the opponents of the renewables wasshort-lived. While the House is more ideological and strident in asserting the Republican faith, the Senate is more pragmatic, and wind has a fierce proponent in Senator Grassley, whose state, Iowa, in 2015 became the first to generate more than 30% of its electricity from wind turbines. The final version of the bill agreed upon in conference by the two chambers was greeted with relief by the supporters of renewable energy sources.

The text that was signed into law by the President on 18 December 2017 preserves the Production Tax Credit for wind at its current level (2.4 cents per kWh) and maintains the 10% ITC beyond 2027 (the House proposal repealed the ITC after 2027). Moreover, a provision to prevent earnings stripping, the Base Erosion Anti-Abuse Tax (BEAT), which was directly threatening to reduce the market for renewable energy tax credits, did not pass. Compromise language still allows using wind and solar PTC and ITC to offset up to 80% of the BEAT. Electric vehicles, which were targeted in the House version, continue to benefit from the current dispositions: consumers are eligible for a subsidy of $ 7500 per electric vehicle, up to 200,000 vehicles sold by each auto manufacturer, a limit that Tesla and GM are expected to reach this year: this subsidy will mostly benefit BMW, Volkswagen and Volvo, three foreign companies with big plans to sell electric vehicles in the USA.

Meanwhile, various technologies that had been left out of the tax reform provisions have enjoyed a late Christmas present: the two-year budget deal compromise voted on 8 February 2018 extends expired 30% ITC on a whole range of so-called “orphan” energy technologies: fuel cells, geothermal, heat pumps and combined heat and power.

Meanwhile, the solar industry was fighting on a second front, against import restrictions on solar panels. This followed after the initiation of a section 201, i.e. a petition for a safeguard against the imports of solar cells and panels filed by two companies, Suniva and Solar World Americas, before the International Trade Commission, the agency that decides on such cases. The two plaintiffs were American subsidiaries of foreign companies, the Chinese Suniva and the German Solar World. They argued that, after being hit by antidumping duties in 2012 and 2013, Chinese manufacturers of solar cells and panels had circumvented the process by moving production abroad, to Taiwan, Malaysia as well as Singapore, Germany and Korea. Imports of solar cells and modules grew by 500% between 2012 and 2016, prices fell by 60%, and the majority of solar companies in the USA disappeared as a consequence (25 companies since 2012).

The Solar Energy Industries Association (SEIA) lobbied hard against the safeguard request, arguing that the manufacturing sector covered by the petition employed only 1,000 people, while the whole solar sector represents more than 240,000 jobs, which would be endangered by the remedies requested by Suniva, which would have caused a doubling of the price of solar panels in the USA.

Despite their effort, the International Trade Commission concluded that the imports had caused an injury and suggested different possible remedies. There was never any doubt that the President, who decides in the last resort upon the propositions of this commission, would impose restrictions on imports: it fits with his protectionist approach to trade (“America First”), and his dislike for renewable energies: during the campaign, he declared in an interview to the Atlanta Constitution: “They want everything to be wind and solar. Unfortunately, it’s not working on large-scale. It’s just not working. Solar is very, very expensive”.

The only question all along was: how tough a remedy? The answer is: not that tough. Beyond a quota of 2.5 gigawatt of cells which will remain tariff free, solar cells and panels coming from all countries will be hit by a duty of 30% in 2017, declining by 5% over a 4-year period, except for a quota of 2.5 gigawatt cells. If - and this is a big if- this duty is not found to be in contradiction with the WTO rules: most impacted countries have already requested consultations-, thus exposing the USA to retaliation from its trading partners.

Most analysts conclude that the tariffs are too low to incentivize companies to invest in new production in the USA, given the short horizon of the safeguard (a new facility would not start producing solar cells before 2019, and would only benefit from the protection against imports during 30 months before the safeguard expires). At the same time, however, the impact on the country’s solar sector will be significant: the SEIA estimates the job losses at 23,000 in 2018. GTM Research, an environmental research institute, forecasts that the country’s solar market will see a net reduction of installations of around 11% as a consequence of these tariffs: a reduction of 7.6 gigawatts in installed solar PV capacity between 2018 and 2022, out of a projection of 68.9 gigawatts over the period.

Overall, the President and CEO of SEIA, Abigail Ross Hopper, expressed relief: "I think that this administration really grappled with the understanding that solar is creating jobs, more jobs in this economy than many other industries and many other energy sources." It could obviously have been worse, but it looks like the solution chosen by the President is a lose-lose proposition: it will not create the manufacturing renaissance he is advertising, but it will cost jobs in the downstream solar installation business.

The oil and gas sectors stand to benefit most

If the environmental groups breathed a sigh of relief when looking at the end result of the tax reform compromise, it should not detract attention from the fact that the big winners of the whole process are the energy companies, and the oil and gas sector in particular.

The Tax Cuts and Jobs Act of 2017 delivers a major symbolic victory to the oil lobby and the Republican Senator from Alaska, Lisa Murkowski: it allows drilling in part of the Arctic National Wildlife Refuge (ANWR), in a tiny (2000 acres) part of the coastal plains on the northern shore of the ANWR, which covers 19.6 million acres. The environmental community and the local indigenous population had fought for decades to prevent drilling in this area. But the Senate rules, somewhat arcane and complicated, gave Senator Murkowski a leverage she used for a maximum benefit: the opening of the ANWR to drilling leases would provide nominal offsets that were indispensable to limit to $1.5 trillion the deficits caused over ten years by the tax reform; since the tax reform was voted on a strictly partisan basis, the Republicans desperately needed her vote to pass the bill.

The energy sector appears to be a major winner of the reform. The reduction of the corporate tax rate from 35% to 21% will relatively benefit more the energy sector, whose median tax rate over the past 11 years has been 36.8%, above the 30% average tax rate for all S & P 500 companies. Barclay’s equity analysts calculate that the 14% point cut in the corporate rate will add $ 1 billion to the profits of the oil and gas exploration and production firms, equivalent of a $ 1 a barrel increase in oil prices.

Another provision is a real bonanza for the energy sector, one of the most capital intensive in the economy: capital expenditures can now be deducted in the year in which they occur, instead of being amortized over the course of several years. For companies like ExxonMobil, which invested $ 22 billion in 2017, or Chevron, which announces a 2018 budget of $ 18.3 billion, this is a major game changer.

The tax reform also preserves the subsidies (the industry does not like the term and denies that they are subsidies) most important for the oil and gas companies: the intangible drilling costs (estimated at between $ 780 million and $ 3.5 billion), the depletion allowance that benefits independent producers (around $ 1 billion) and the 15% tax credit for enhanced oil recovery.

The medium-term picture, however, is less positive for medium or smaller companies. US oil and gas producers will be hit by new restrictions on tax relief for interest payments, since the law sets limits on deductions for interest payments. The new law will put pressure on heavily indebted companies to reduce their borrowings, and could push over-burdened companies into steeper decline if their earnings fall. It limits deductions for interest payments to 30% of earnings before interest, tax, depreciation and amortization (EBIT) between 2018 and 2021, and a lower threshold of 30% of earnings before interest and tax (EBITDA) from 2022 onwards. In the exploration and production sectors, if the limits on deductions for 2018-21 had applied in 2016 - admittedly a bad year for the industry because of falling oil prices - companies would have been unable to claim tax relief on 39% of their interest payments, according to Greensill Capital, a trade finance firm. The limit for 2022 onwards would have prevented relief on 97% of those payments.

Overall, however, the oil and gas industry is a clear winner of the tax reform process, while renewable energy sources benefit from a quasi-status quo.

After two rounds, the tax reform and the solar safeguard, the renewables are trailing by a few points, but the match is far from over.

NATO Took Some Knocks But Survives Its 70th Anniversary...