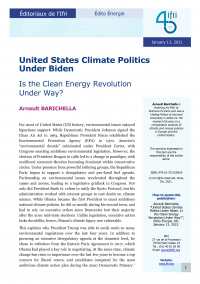 However, the election of President Reagan in 1980 led to a change in paradigm, with neoliberal economic theories becoming dominant within conservative circles. Under pressure from powerful lobbying groups, the Republican Party begun to support a deregulatory and pro-fossil fuel agenda. Partisanship on environmental issues accelerated throughout the 1990s and 2000s, leading to a legislative gridlock in Congress. Not only did President Bush Jr. refuse to ratify the Kyoto Protocol, but his administration worked with interest groups to cast doubt on climate science. While Obama became the first President to enact ambitious national climate policies, he did so mostly during his second term, and had to rely on executive orders since Democrats lost their majority after the 2010 mid-term elections. Unlike legislation, executive action lacks durability; hence, Obama’s climate legacy was vulnerable.

This explains why President Trump was able to easily undo so many environmental regulations over the last four years. In addition to pursuing an extensive deregulatory agenda at the domestic level, he chose to withdraw from the historic Paris Agreement in 2017, which Obama had played a key role in negotiating. At the same time, climate change has risen in importance over the last few years to become a top concern for liberal voters, and candidates competed for the most ambitious climate action plan during the 2020 Democratic Primary. For the first time in US history, climate change became a dominant issue in a Presidential election, forcing Joe Biden to backtrack on his initially moderate proposals and set out a much more ambitious plan known as the “Clean Energy Revolution”. Thus, Biden’s election has raised high hopes that the US might finally be on the verge of enacting far-reaching climate policies, as well as reclaiming a leadership role on the global stage. To what extent will Democrats be able to deliver on campaign promises?

Without a doubt, Biden’s plan for a “Clean Energy Revolution” constitutes the most far-reaching federal climate policy agenda ever proposed by a President-Elect, going far beyond anything attempted under Obama. This includes ensuring the “US achieves a 100% clean energy economy and reaches net-zero emissions no later than 2050”, with an intermediary target of transitioning to a carbon-free power sector by 2035. Likewise, the plan sets out a record $2 trillion in investment to support the development of renewable energies and to enhance energy efficiency, as well as research in innovative technologies. Biden’s plan also contains ambitious proposals to upgrade infrastructure and adapt to the effects of climate change, as well as address environmental justice issues by “standing-up to the abuse of power by polluters who disproportionately harm communities of color and low-income communities”.

Biden’s appointment to key positions of experienced administrators or politicians with strong environmental records, including Regan at the EPA, McCarthy as National Climate Adviser, and Granholm as Energy Secretary, confirms his intention to pursue an ambitious domestic agenda. Yet, his administration may face significant obstacles in implementing some of its more far-reaching proposals over the next few years. Firstly, the Democratic majority in the House of Representatives shrunk by a dozen seats after the 2020 elections, and House Democrats have become very divided between moderates and progressives. The latter could hamper efforts to reach bipartisan compromise over climate legislation, which will be necessary due to the situation in the Senate.

While Democrats succeeded in winning both Georgia Senate runoff elections, the upper Chamber remains split in half, with each Party holding fifty seats. A few moderate Republican Senators, like Susan Collins, have said they were ready to support Biden’s legislative agenda on several issues, including climate change. Likewise, Vice-President Kamala Harris may cast the deciding vote to break a tie in the Senate. However, Republicans have indicated they intend to rely on the ‘filibuster’, an obstruction technique based on the right of Senators to speak continuously; Democrats currently lack enough votes to override the filibuster on many issues. While progressives have recommended scrapping the filibuster, a number of moderate Democrats are opposed to this, in addition to being lukewarm towards some of the more far-reaching aspects of Biden’s climate agenda.

For these reasons, some level of bipartisan consensus will be needed. With thirty-six years in the Senate and eight years as Vice-President, Biden has a record of reaching compromises with Republicans. What is more, due to recent changes in public opinion amongst moderate conservative voters, several Republicans such as Senators Graham and Barrasso have begun to evolve their position, embracing ‘innovation over regulation’ to address climate change. Hence, there is some bipartisan support in Congress for policies involving infrastructure upgrades, nuclear power, as well as funding for research & development (R&D) targeting innovative technologies such as carbon capture and storage; these are likely to constitute priority actions over the next two years. In particular, both Parties are under pressure to enact another stimulus package in response to the ongoing recession, which could include noteworthy climate-related spending in these areas. Through a process known as “Reconciliation”, Democrats can expedite the passage of certain budgetary legislation, circumventing the filibuster.

Therefore, while Biden will probably be able to enact some measure of climate legislation over the next few years, gridlock in Congress will most likely result if Democrats attempt to push through the more far-reaching aspects of the “Clean Energy Revolution”. In addition, Democrats risk losing their majority in the House after the 2022 mid-term elections, which would worsen the gridlock. Hence, Biden may only have two years to generate a new momentum on climate change within Congress, at a time of historic upheaval with the COVID-19 and economic crises, which will complicate matters further.

Circumventing gridlock at the national level

For these reasons, Biden will probably have to rely on executive action to implement a number of his climate proposals (similarly to Obama). A great deal can be achieved in this manner, especially in terms of reinstating many of the regulations that were repealed under Trump. Yet, the problem is that executive orders can just as speedily be undone by the next President. Trump has also packed federal agencies with climate change deniers over the last four years, and re-staffing will take time, which could slow down implementation of climate policies.

Likewise, a more serious issue is that Trump has appointed many conservative federal justices, together with three Supreme Court nominations. Thus, if Biden’s executive orders are too far-reaching, they risk being struck down by the federal judicial system. In fact, Obama’s Clean Power Plan was blocked by the Supreme Court in 2016, when the Court did not have as strong a conservative majority as it does now. This does not bode well for Biden’s executive agenda, and may result in a continuation of the federal gridlock on climate policy. While Democrats will probably still be able to push through several noteworthy initiatives, the more ambitious proposals formulated during the campaign will in all likelihood be thwarted.

One way the new administration intends to circumvent this gridlock is through climate risk disclosure for companies; this could become an important policy lever, since it only requires collaboration with financial regulators. Another method would be to rely on initiatives at the state level, which include some of the world’s most ambitious climate policies (mostly on the East and West coasts). For instance, if Biden is unable to mandate strict federal greenhouse gas (GHG) emission standards for vehicles, he could instead confirm California’s waver, encouraging other states to then follow its lead. Due to states’ broad powers under the US federal system, if Biden manages to put in place an “enabling framework” involving effective federal-state collaboration, this might be sufficient to put the US on a path towards carbon neutrality over time.

Biden has declared that climate change will be a top priority of his foreign policy. John Kerry’s appointment as “Special Climate Envoy” is a strong signal in this regard, given his high profile and political experience. Biden announced that he will launch the formal process to rejoin the Paris Agreement, which only takes thirty days to come into effect, on the first day of his Presidency. Indeed, Obama had insisted during Paris negotiations in 2015 that the accord be structured as an executive agreement, making it possible to bypass the Senate for ratification.

The prospect of the US rejoining the Paris Agreement is excellent news, given America’s position as the world’s largest economy and second GHG emitter after China. Under Trump, the US had teamed-up with other climate skeptic countries such as Russia, Saudi Arabia, Iran, and Kuwait, disrupting UN climate negotiations. Hence, there is now a new momentum ahead of the crucial 26th Conference of the Parties (COP26) Summit in Glasgow scheduled for November 2021, when countries must update their Nationally Determined Contributions (NDCs). Biden has stated his intention to organize a global climate summit ahead of COP26, in order to galvanize the international community. The European Union (EU) has responded positively, indicating that it hopes to reinforce bilateral climate collaboration with the US, including via trade and diplomacy. Likewise, despite a sharp deterioration in relations under Trump, most of the Biden administration seeks to re-establish a strategic climate partnership with China (as had been the case under Obama).

However, these positive developments must be nuanced because of the US domestic situation discussed above. Indeed, if Biden is constrained and unable to enact sufficiently ambitious climate policies, then the renewed American NDC may end-up lacking credibility. This would reduce America’s ability to set the example and convince other nations to significantly raise their level of ambition. Moreover, the US has historically been opposed to more rigorous review processes, with Obama insisting at Paris on a relatively loose framework for reviewing NDCs. America’s return could thus paradoxically make it harder to improve certain aspects of the Paris Agreement. Yet, the international community has means to put pressure on the US; for instance, an EU carbon-border adjustment mechanism might be useful in this regard.

How Can American Democracy Be Fixed?

Laurence NARDON
Myanmar: How worse can it get? Visioconférence