For decades, Europe has been trying to chart a path away from the military competition and strategic rivalries that brought it to ruins so many times in history. 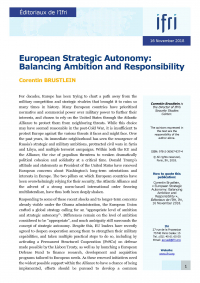 Many European countries have prioritized normative and commercial power over military power to further their interests, and chosen to rely on the United States through the Atlantic Alliance to protect them from neighboring threats. While this choice may have seemed reasonable in the post-Cold War, it is insufficient to protect Europe against the various threats it faces and might face. Over the past years, its immediate neighborhood has seen the resurgence of Russia’s strategic and military ambitions, protracted civil wars in Syria and Libya, and multiple terrorist campaigns. Within both the EU and the Alliance, the rise of populism threatens to weaken dramatically political cohesion and solidarity at a critical time. Donald Trump’s attitude and statements as President of the United States have renewed European concerns about Washington’s long-term orientations and interests in Europe. The two pillars on which European countries have been overwhelmingly relying for their security, the Atlantic Alliance and the advent of a strong norm-based international order favoring multilateralism, have thus both been deeply shaken.

Responding to some of these recent shocks and to longer-term concerns already visible under the Obama administration, the European Union crafted a global strategy calling for an “appropriate level of ambition and of strategic autonomy”[1]. Differences remain on the level of ambition considered to be “appropriate”, and much ambiguity still surrounds the concept of strategic autonomy. Despite this, EU leaders have recently agreed to deepen cooperation among them to strengthen their military capabilities, and taken multiple practical steps to do so, including by activating a Permanent Structured Cooperation (PeSCo) on defense made possible by the Lisbon Treaty, as well as by launching a European Defense Fund to finance research, development and acquisition programs tailored to European needs. As these renewed initiatives need the widest possible support within the Alliance to have a chance of being implemented, efforts should be pursued to develop a common understanding of the meaning of strategic autonomy. This paper offers an interpretation of strategic autonomy in a European context, and argues that even an ambitious vision of European strategic autonomy would not work at cross-purpose with a revitalized transatlantic link. Quite the contrary, as some experts have already argued[2], the Alliance would fully benefit from a higher degree of European military credibility.

Strategic Autonomy in a European Context

As a concept, ‘strategic autonomy’ has appeared only recently in the debate on the EU Common Security and Defense Policy, and after considerable controversies. While the first moves predated the election of Donald Trump, the latter only vindicated the necessity for Europe to be more autonomous, an ambition endorsed by political figures such as French President Emmanuel Macron, German Chancellor Angela Merkel, and more recently by Finnish President Sauli Niinistö. Yet the concept is far from having a clear definition or even an agreed understanding.

French strategic policy can be a useful point of departure to discuss what strategic autonomy might be in a European context. The notion has played a central role over the last decades, particularly since the end of the Cold War, in the French strategic debate, where it is still considered a priority goal of the defense policy[3]. The centrality given to strategic autonomy by French elites and the fact that France championed strategic autonomy as a goal for Europe certainly explain some of the concerns of allies in the burgeoning debate on European strategic ambitions – simply put, the fear that France would love to commit the EU to a Gaullist turn, pushing it to sever the transatlantic link while bolstering French influence.

The reality of France’s strategic autonomy is a much more nuanced one, and shows that autonomy and alliance membership can go hand in hand. Like all NATO allies, France has benefited from outside support to develop – and maintain – critical elements of its military capabilities, and frequently relies on others, singularly on the United States, to face adversaries, as evidenced in recent and ongoing military operations in Sahel and elsewhere. Militarily, acting alone comes at the price of greater tactical and strategic risks and less diplomatic traction, and thus is avoided unless the stakes are so high that they make these risks acceptable. Still, Paris has invested heavily over the past decades to be able, if need be, to assess the severity and nature of a threat, and to plan and conduct military operations, including in contested environments, without having to rely on others[4].

European strategic autonomy is not about building up a European military power with French attributes such as a nuclear deterrent. However, a reality-check of France’s defense policy reminds us that strategic autonomy is less about conducting a foreign and security policy in total political and military isolation from the United States than it is about being able to decide upon, and to control at least in part, one’s own fate. For Europe, being strategically autonomous requires the ability to set a vision of its role in its neighborhood and on the world stage, to identify desirable political goals, and to craft and implement plans meant to achieve those, including through the use of military force.

The French case also illustrates that strategic autonomy should not be considered as something absolute[5]. The ability to use military force autonomously depends on factors such as the urgency of the crisis, the geography of the theater of operations, or the severity of the threats that might be encountered. Framing the debate as a binary issue is both mistaken and counterproductive. The question is not whether Europe should be strategically autonomous or not, it already is in some limited respects, but what benefits can be drawn from reaching higher degrees of European autonomy in the political, operational and industrial realms[6].

The Value of Ambition

Europe should aim high when it comes to developing its strategic autonomy, and strive to become a military power credible enough to autonomously tackle military contingencies more complex and risky than post-conflict stabilization, counter-piracy or border control. To be clear, no European military hegemon is in the making. Collective defense should remain a NATO mission, since European countries taken together cannot, in the foreseeable future, become a better security and stability provider in the continent than the US and the Alliance have been and still are. While the shadow cast by the current US administration on the future of transatlantic relations is often offered as the main reason to support greater European strategic autonomy, the truth is that strengthening European military credibility has become increasingly critical to the very endurance of the transatlantic link.

In a period characterized by heightened strategic competition and a weakened norm-based international order, the number of military challenges to the US will only grow. With commitments throughout the world, domestic economic and political constraints, and increasingly capable adversaries, Washington will be hard-pressed to maintain the same commitment to stability in Europe, the Middle East or Africa by 2025 or 2030. A militarily credible Europe taking responsibility in a growing number of regional contingencies could free the hands of the United States, allowing it to be more selective and to focus on the high-end security challenges only it can tackle effectively, such as deterrence and defense against strategic competitors. As heightened strategic competition might push the EU to take greater responsibility, merely maintaining the current limited level of European military ambition could become unfeasible due to changes in the strategic, operational and technological landscapes. The relative democratization of anti-access and area denial (A2/AD) capabilities and the prospect of their diffusion in the European neighborhood require from EU militaries that they start increasing their level of ambition, if only to sustain their freedom of action in potential future contingencies.

A strong and resilient Alliance fit for an era of strategic competition also has to be more balanced, to tackle the diversity of threats it faces. The need to bolster the credibility of European militaries is widely recognized, if only for burden-sharing purposes. But credibility requires an ability to act upon one’s words. Critics arguing that strengthening European strategic autonomy would endanger the Alliance neglect the deep connection that exists between credibility and autonomy: the former cannot happen without the latter. US leaders have legitimately complained for decades about burden-sharing within the Alliance, but efforts and responsibilities go hand in hand. The security of Europe requires not only that the renewed commitment to defense among EU members continues to materialize, but that the resulting military power be used in support of NATO operations and, if Washington is unwilling or unable to participate, of European ones. The resulting transatlantic partnership will only come out stronger.

The Faces of Ambition

An ambitious vision of European strategic autonomy may take many forms, but inverting a decades-long trend of decreasing military effort takes time. While strategic autonomy can only materialize in the long-term, there are multiple ways to start building it while boosting the credibility of the Alliance.

Most importantly, Europe should prepare for the long haul. Both credibility and strategic autonomy can only emerge and be demonstrated in the long term, as a common strategic culture takes shape through shared effort and experiences.

Neither surveillance nor algorithmic consumerism. Towards...
END_OF_DOCUMENT_TOKEN_TO_BE_REPLACED
Citizen Mobilization: A Solution for Refugee Integration in Europe?