October 2016 presented a grim test for the fourteen-year-old International Criminal Court (ICC) as three Sub-Saharan African countries, Burundi, South Africa and Gambia announced their decision to opt out of the international judicial body. 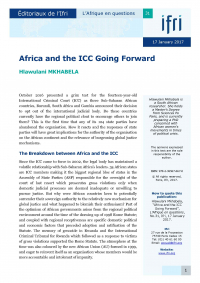 Do these countries currently have the regional political clout to encourage others to join them? This is the first time that any of its 124 state parties have abandoned the organisation. How it reacts and the responses of state parties will have great implications for the authority of the organisation on the African continent and the relevance of burgeoning global justice mechanisms.

The Breakdown between Africa and the ICC

Since the ICC came to force in 2002, the legal body has maintained a volatile relationship with Sub-Saharan Africa’s leaders. 34 African states are ICC members making it the biggest regional bloc of states in the Assembly of State Parties (ASP) responsible for the oversight of the court of last resort which prosecutes gross violations only when domestic judicial processes are deemed inadequate or unwilling to pursue justice. But why were African countries keen to potentially surrender their sovereign authority to the relatively new mechanism for global justice and what happened to blemish their enthusiasm? Part of the optimism of African governments arises from the regional political environment around the time of the drawing up of 1998 Rome Statute; and coupled with regional receptiveness are specific domestic political and economic factors that preceded adoption and ratification of the Statute. The memory of genocide in Rwanda and the International Criminal Tribunal for Rwanda which followed as a response to victims of gross violations supported the Rome Statute. The atmosphere at the time was also coloured by the new African Union (AU) formed in 1999, and eager to reinvent itself as an organisation whose members would be more accountable and intolerant of impunity.

Along with a regional discourse favourable to the international justice agenda, toward the end of the 20th century a few Sub-Saharan countries were also looking to conclude protracted intrastate conflict. Decimated national judicial structures were unable to meet calls for justice, and in the international legal body, threatened leaders saw a means to eliminate potential rivals and spoilers to stability. Amongst the first cases to be referred to the ICC was the situation in Uganda reported in 2004. The threat of ICC prosecution provided President Museveni another tool with which to confront the Lord’s Resistance Army and rebels that menaced his control and domestic stability. The court at The Hague served domestic political interests, though initiating an international investigation is a high-risk strategy for removing potential competition, the ICC relieves African governments from the significant economic and political burden of prosecuting mass violence, and should complement domestic justice processes.

However, the initial gusto with which many Sub-Saharan states adopted the Rome Statute has diminished in recent years. African leaders accuse the body of having a prejudiced agenda exclusively targeting African criminals despite equally or even more pressing situations in other parts of the world. Though six of the ICC’s ongoing investigations were at the request of the African states concerned, observers have decried the fact that all but one investigation approved by the Pre-Trial Chamber are situations on the continent.[1] The second complaint is the alleged political insensitivity with which the ICC operates at times threatening peace or picking a side in disputed political struggles. The AU’s members argue that heads of state and senior officials should have immunity in the interest of peace and stability and prosecuting them amounts to an international effort to change African regimes.

Investigation into the situation in Kenya has embodied the grievances of regional political elites and offered a single motif around which discontent can be harnessed. The Kenyan government spearheaded a campaign against the ICC in response to the Office of the Prosecutor’s (OTP) decision to open an investigation into the 2007 electoral violence. The government held that the ICC had overstepped its bounds as a court of last resort and could potentially jeopardise stability in the entire region. Key to the strategy is the charge that the Criminal Court pursues a neo-colonial agenda that maintains Europe’s hold on Africa’s political and economic future explaining the EU’s generous financial contribution to the body.

Fatou Bensouda, the Gabonese chief prosecutor has failed to quell African concerns. This is despite the presentation of the OTP’s new policy framework for case selection and assurances that progress had been made in the preliminary investigation of non-African situations.[2] In some respects there is merit to the argument that the ICC has been politically awkward and initially viewed Africa as an appropriate testing ground for the embryonic organisation. But on the other hand, each member states’ decision to leave the ICC has more to do with signalling a message about foreign policy orientation and responding to domestic politics rather than a genuine desire to alter the operational practice of the court.

Explaining the Choice to Leave

The three countries that have decided to quit the ICC may appear different, but all three have a similar domestic stressor which drives their choice. They all have a need to draw inwards and shut out external sources of oversight and criticism as a response to an increasingly vocal and organised civil society and opposition politics.

Burundi has been playing a complex game with the international community since the political crisis that began following President Nkurunziza’s decision to run another term violating the two-term limit set by the 2000 Arusha Peace and Reconciliation Accord. The economic slowdown and security environment mean that Burundi desperately needs international assistance, but the country shuns international interference, rejecting a UN police force and a proposed AU peacekeeping force. Parliament’s choice to exit the ICC in October was sparked by the court’s announcement of a preliminary examination of politically motivated violence since April 2015. But leaving the ICC also asserts sovereignty to counter increased international pressure, and it depresses opposition voices that have used international platforms to garner support.

On October 25, Gambia announced that it would be leaving the ICC reproaching the institution for the “persecution and humiliation of people of colour”. Domestic discontent directed at President Yahya Jammeh’s 22-year old regime spiked in 2016. With elections approaching in December, the government faced public protests calling for reform and decrying the regime’s practice of quashing dissent through arrest and forced disappearances. Jammeh had reason to be concerned as opposition parties which have been weak and disorganised formed an alliance, winning the closely fought election. Though the president initially conceded defeat, the established autocrat later rejected the result and refused to step down. Gambia’s decision to leave the ICC is a continuation of the regime’s policy of responding to domestic disquiet through anti-west posturing and attacks on symbols of the liberal human rights agenda. When the government’s power is threatened, it drums up support from the population of the largely rural and impoverished country by showing defiance against perceived western cultural and economic dominance while simultaneously dissuading domestic calls for reform.

South Africa seems to be the outlier in this group. Its choice to leave the ICC is particularly disarming considering the nation’s central role in promoting democratic norms and regional accountability mechanisms and its agenda-setting influence. Surprisingly on October 21, the country officially gave notice to withdraw from the international human rights and justice mechanism claiming that membership in the organisation impeded its capacity to effectively mediate conflict and restore stability in the region. Though President Jacob Zuma had supported his Kenyan counterpart in the anti-ICC crusade, South Africa’s gripe with the ICC was only evident after June 2015 when a local court demanded the detainment of Sudanese President Omar Al-Bashir wanted by the international court and attending an AU Summit in Johannesburg. Ignoring the court and its international obligation, the government allowed Al-Bashir to leave its territory. Pretoria claims that membership in the ICC put it in the untenable position of having to weigh the right to diplomatic immunity with its obligations under the ICC statute. In local government polls in August, the ruling African National Congress (ANC) suffered its worst electoral defeat since coming to power. After successive corruption scandals, calls for the president and his circle to step down have come from the public, civil society and opposition parties. Similar to Nkurunziza and Jammeh, Zuma and his executive circle have tried to draw inwards and shut out external criticism.

Though AU member states have threatened to leave the ICC if the institution does not undertake reforms such as granting immunity for sitting heads of state and senior officials, acting on the threat will be an individual state decision pushed by domestic factors as well as economic partnerships with western European states that are the ICC’s biggest financial contributors. In West Africa, strong voices supporting the ICC are growing. Senegal, the first state to sign the Rome Statute, has advised African countries to work to reform the organisation from within the ASP. Nigeria, Africa’s largest economy is supported by Senegal, Cote d’Ivoire, Tunisia and Algeria in rejecting calls for a consolidated African position on the ICC claiming that 20 of Africa’s 54 nations are not members of the ICC and should have no bearing on whether individual states abide by their international obligations. In East Africa Tanzania remains a staunch advocate for the ICC. Though Burundi will be supported by fellow East Africans, Kenya and Uganda, it remains to be seen if they will withdraw, and Nairobi and Kampala will be influenced by specific domestic political and economic factors despite championing the African revolt.

South Africa is the continent’s second largest economy and has the position of a regional political agenda-setter and norms pioneer prominent within the Southern African Development Community (SADC). But Southern African states remain uncertain in the wake of South Africa’s withdrawal. Though Namibia’s cabinet voted to leave the ICC in late 2015, Botswana continues to support the justice mechanism. Since Zuma’s presidency South Africa’s foreign policy has been marked by a schism which does not inspire confidence. On one side, it continues to be a vocal advocate for human rights championing the right to self-determination. But on the other side, the current leadership of the ANC often finds itself on the same side of the human rights debate as China and Russia, even rejecting international protocols for the protection of civil society.[3] Leaving the ICC demonstrates the continued confusion in the country’s foreign policy. As the president’s legal troubles grow and domestic protests intensify, regional allies may delay a decision on the ICC while waiting to gauge how South Africa’s outlook will develop.

The situation is not wholly bleak for the ICC in Africa, there remains signs of continued faith in its potential to support domestic peace processes. Though the ICC should review its practises, the choice to leave the Court will be determined by domestic pushes rather than African disillusionment with the imperfect processes of international justice.

[1]. Situations in Sudan and Libya were referred by the Security Council; Kenya and Cote d’Ivoire were initiated by the Office of the Prosecutor (OPT) while the rest were at the request of the states concerned. Currently, the only non-African situation under investigation is the crisis in Georgia in 2008.

Sub-Saharan Africa Elections, Governance and Evolution of the State in Africa Africa on the International Scene