Democracy in Africa: Reversing Backsliding after Ten Years of the African Charter on Democracy L'Afrique en questions, No. 41, 6 December 2017

Between 15-21 November 2017, a day short of one week, Africa’s second longest-serving leader, President Robert Mugabe of Zimbabwe was forced out of office through a spectacular coup d’État. The collapse of Mugabe is hardly surprising, with the country having experienced close to two decades of democratic backsliding. 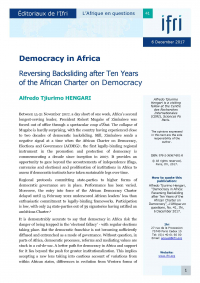 Still, Zimbabwe sends a negative signal at a time when the African Charter on Democracy, Elections and Governance (ACDEG)[1], the first legally-binding regional instrument in the promotion and protection of democracy is commemorating a decade since inception in 2007. It provides an opportunity to gaze beyond the accouterments of independence (flags, currencies and elections) and proliferation of institutions in Africa to assess if democratic instincts have taken sustainable legs over time.

Regional protocols committing state-parties to higher forms of democratic governance are in place. Performance has been varied. Moreover, the entry into force of the African Democracy Charter delayed until 15 February 2012 underscored African leaders’ less than enthusiastic commitment to legally-binding frameworks. Participation is low, with only 24 state-parties out of 39 signatories having ratified an ambitious Charter.[2]

It is demonstrably accurate to say that democracy in Africa risks the danger of being trapped in the ‘electoral fallacy’ - with regular elections taking place. But the democratic franchise is not becoming sufficiently diffused and entrenched as a mode of governance. Without question, in parts of Africa, democratic processes, reforms and mediating values are stuck in a cul-de-sac. A better path for democracy in Africa and support for it lie beyond the push for greater institutionalization. This implies accepting a new lens taking into cautious account of variations from within African states, differences in evolution from Western forms of democracy but with supplementary commitment to democracy as an end in itself.

The state of democracy in Africa could best be seized through the metaphor of a ‘glass half full/half empty’. The Charter lays out ambitious procedures for sanctions in the event of member states’ failure to live up to provisions. Its ambitions notwithstanding, the discordant journeys the Charter had travelled to its 10-year anniversary and beyond attest to Africa’s chaotic democratic trajectory. Mugabe’s collapse with guns in the room amplifies the chaos. This is not unanticipated. Five arguments could serve as an explanation.

First, three out of the eight recognized Regional Economic Communities of the African Union do not have separate instruments or constitutive documents with specifics on democracy, elections or governance. These are the Economic Community of Central African States (ECCAS), the Communauté des États Sahélo-Saheriens (CEN-SAD) and the Arab Maghreb Union (AMU). Conflict dynamics and politico-religious considerations are affirming exceptions and differentiations in modes of governance in Mauritania, Chad, Niger, Sudan, and Libya to list but a few states in the Sahel and West Africa. Differentiation in expectations, if not indifference in these peripheral zones explains in part why democracy is in a state of flux, undulating between recession and consolidation.

Second, the signs of erosion are manifested through elections as sites of violence and death; the closing down of civil society space; and the rise of populism. At elections, protests and manifestations, social media and internet blackouts as anti-democratic impulses are part of the state apparatus response. These point to the malaise of democracy in Africa. Election-related violence has been on the increase, often a consequence of elections deemed by the losing parties not to be free and fair. Election rigging is a recurrent feature. Institutions are in place, but manipulation as the delayed electoral processes in the Democratic Republic of Congo attests to a more subtle and sophisticated strategy. Election-related violence and other forms of democratic erosion are accentuated by slowing economic growth, rising inequalities and political gridlock, of which Kenya is the most recent manifestation. As a consequence, a potentially dangerous surge in semi-authoritarian leadership, disaffection with liberal democracy and a desire for the ‘strongman’ is finding an echo-chamber as a guarantor of stability and buffer against the perceived rise of corruption and unaccountable leadership. Tanzania under the leadership of a democratically elected John Magafuli, popular but with bold populist rhetoric subverting rule of law, the values of political diversity and press freedom is a case in point.

Third, democracy has been deprioritized in the context of conflict, and the rise of religious extremism. Western actors ordering the fight against terrorism at the top of their concerns in light of its direct consequences on their own domestic contexts are without doubt contributing to the democratic recession in some parts of the Sahel and the Horn of Africa. Ethiopia, Mauritania and Chad have struggling democratic credentials. But the fight against terrorism with state-survival at the core has made less democratic states pivotal actors in the strategies of the West. This form of security cooperation has occurred at the expense of the stalled agenda on the input-side of democracy. As a consequence, a security doctrine is reinforcing a status quo. The diffusion of power from the state to non-state actors that has been in motion is now under threat.

Fourth, the immense economic muscle of China, its own anti-democratic economic miracle, and other rising powers (Russia and Turkey) unenthusiastic about democracy has intervened in Africa’s path towards democracy. These powers do not call for respect of human rights, free elections, and inclusive participation as preconditions for engagement. Cynically, the nature of the regime is hardly of interest, provided interests can be secured. Underappreciating the desirability of democracy through the African Union, these powers pursue case-by-case transactional diplomacies offering attractive outlets and enhancing the legitimacy of less accountable governments. They have emboldened the previous stance of errand democracies such as Zimbabwe.

Fifth, the health of democracy in Africa is intimately tied to the state of democracy, if not the rhetoric of democracy worldwide. Traditional and rising powers, including South Africa, once an eminent normative voice in the sub-region are under-investing in democracy promotion with disturbing impacts on the quality of democracy in Africa. President Barack Obama’s strategy of retrenchment based on the belief that if the US stepped back, “its allies would step up and take more responsibilities for the upkeep of the liberal order” appears to be faulty.[3] The election of Donald Trump in 2016, and the accompanying rhetoric of “America first” signaled under-commitment on the norms of democracy, human rights and justice. The decline of democracy in Turkey, an influential developmental actor in North Africa and the Horn is eroding the “demonstration effect” it was to have.

The argument here points to the troubled condition of democracy in Africa. The normative conviction about democracy’s intrinsic merits and superiority against other forms of government seems to be under stress. Conflicting signals in the domestic politics of African countries, divergent views about term-limits and the role of civil society as firewalls in democratic governance attest to the challenges on the road ahead. With distressing consequences for internal democratic development, 19 African leaders have ruled their countries beyond two decades, of which the majority in the category having been in power for over 20 years.[4] This hardly opens up the space for democratic norms diffusion and values convergence within the African Union. Democracy seems to be stuck in the electoral fallacy, with a worrying lack of appetite for norm diffusion and implementation beyond elections. Democracy’s incoherent path and hybrid practices under hesitant democrats suggest that the distribution of democratic reforms in Africa are invariably at odds with what had been anticipated in the Charter.

A unique opportunity ahead for democracy

It is premature to conclude about the de-prioritization of democracy as a dominant and preferred form of governance in Africa. The Africa Democracy Charter beyond its 10th anniversary, the uptake in signatories and membership could serve as an important land-mark for a better future for democracy in Africa. This positive signal should be emphasized alongside the re-invigoration of the African Peer Review Mechanism (APRM), whose remit on democratic governance is wider and potentially more impactful. With a membership of 36, and 17 reviews by the forum of the Heads of States and Government, the APRM has the potential to illustrate the challenges and opportunities ahead in Africa’s path to democratic consolidation.

The majority of African states have committed to some minimal form of democratic institutions. Not all regional integration mechanisms have fared badly on democracy support. The Economic Community of West African States (ECOWAS) has demonstrated aptitude in impacting the domestic order of member-states through the imposition or restoration of democracy. Following the disputed December 2016 presidential elections in The Gambia in which the incumbent Yaya Jammeh lost to Adama Barrow, ECOWAS restored democracy by threatening the use of force. Even though it deployed troops to enforce the electoral outcome, a democratic transition succeeded without brute military force.

Internal dynamics within countries could serve as an explanation for the spread and pace of democratization. Social movements from the bottom have facilitated the consolidation of democracy in Africa. In Burkina Faso, popular uprisings against a term in office too many led to the displacement of the political oligarchy of Blaise Compaoré in 2013, opening space for dissent, elections, and the emergence of a pluralistic civil society. Similar uprisings and protests from the ground-up were evident in Burundi (2015), the Democratic Republic of Congo (DRC), Senegal (2012) and Ethiopia (2017). Outcomes have without doubt been divergent, in some instances leading to repression in Ethiopia and Burundi, and difficult compromises in the DRC. But in the case of Senegal, the social movement Y’en a marre (We have had enough) mobilized youth against the Presidential candidacy of then incumbent Abdoulaye Wade, who was seeking a third term, and lost.

The interaction between internal demands for democracy and the external facilitation role of AU protection mechanisms and instruments in these domestic processes should not be under-estimated. Pursuing a policy of zero-tolerance, Article 30 of the AU Constitutive Act in relation to unconstitutional changes of government has been widely applied in Mali (2012), Egypt (2013) and Burkina Faso (2013).[5] Following a coup d’État and undemocratic forms of acceding to power in these states, the AU suspended them from participation in its activities subject to a return to a civilian government.

The rise of counter-democratic models of governance as attractive, inspired by the success of China and its presence in Africa are generally exaggerated. Democracy requires patience and structural changes to occur. The African experience, in which it takes shape under difficult conditions, with plural external and internal demands (religious, socio-economic and political) suggest that its development would equally be daunting. The heavy lifting would occur, as it is, due to the domestic demand-side for democracy in African countries. The multilateralization of the democratic enterprise through several instruments, including the African Democracy Charter could validate and legitimize domestic demand by providing opportunities for better democratic governance and normative convergence at the continental level. But this is still insufficient.

The courtesies of institutions and the inherent limits in Africa’s multilateral approaches for democracy support demonstrate that there is a need to look beyond the elemental, if not minimalist considerations for democratic governance. The potential lies in concerted support for domestic processes.

[2]. List of countries which have signed, ratified/acceded to the African Charter on Democracy, Elections and Governance : au.int

Sub-Saharan Africa Elections, Governance and Evolution of the State in Africa
Publications+

The Right-wing Extremism in Germany. An Underestimated...
END_OF_DOCUMENT_TOKEN_TO_BE_REPLACED
Economic and political rivalries in Russia's energy sector