A “New Africa-France Summit” was held on October, 8 at Arena Sud de France in Montpellier. 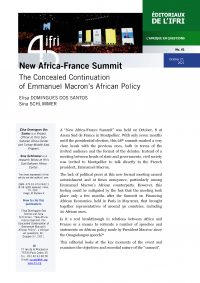 The continuation of the vision presented in Ouagadougou

The French president wanted this event to be “a radically new type” to “reshape the Africa-France relationship”. But this summit, which was supposed to be groundbreaking, was, however, part of the continuing communication around the changes in African policy in this five-year term. Entrepreneurship, civil society, diaspora, youth, new technologies, networking, promoting a “partnership relationship” and “opportunities” for economic cooperation were all key words at the heart of the discussions shaping this summit. On the other hand, there was little time for political issues, although some of them were broached on the civic engagement stage and during the plenary session.

With only seven months until the presidential election, this 28th summit marked a very clear break with the previous ones, both in terms of the invited audience and the format of the debates. Instead of a meeting between heads of state and governments, civil society was invited to Montpellier to talk directly to the French president, Emmanuel Macron.

The lack of political peers at this new format meeting caused astonishment and at times annoyance, particularly among Emmanuel Macron’s African counterparts. However, this feeling could be mitigated by the fact that the meeting took place only a few months after the Summit on Financing African Economies, held in Paris in May 2021, that brought together representatives of around 30 countries, including 20 African ones.

Is it a real breakthrough in relations between Africa and France or a means to reiterate a number of speeches and statements on African policy made by President Macron[i]  since the Ouagadougou speech?[ii]

This editorial looks at the key moments of the event and examines the objectives and essential nature of the “summit”.

Welcome to the New Africa-France Summit

The morning session of the New Africa-France Summit gave the 3,000 attendees, who were featureless in their masks and headphones, the opportunity to walk around six themed areas and listen to the presentations. On each stage between 9:00 A.M. and 2:00 P.M., the speakers took very quick turns in giving short presentations of about five to ten minutes that did not allow time for debate.

The simultaneousness of the sessions and shortness of the presentations, not unlike the Paris Peace Forum or TED talks, combined with sport and musical entertainment, have undeniably revitalized and brought a burst of youthful energy sought by the French president. However, this modern agora almost inevitably revealed its downside, namely an increase in monologues without any opportunity for dialog, even more so in this moving and browsing audience, and a real lack of prioritization in the subjects discussed, as horizontality was the key factor. In the same way, the sheer variety of topics discussed, sometimes very briefly, made it difficult to build on the content of the hundreds of speeches made by civil society members from all parts of Africa and France.

The plenary session in the afternoon took a more traditional format with the French President Emmanuel Macron, Cameroonian historian Achille Mbembe, and 11 “rising stars” or representatives of African civil society and the diaspora. Mbembe had agreed to lead the discussion between the president and civil society[iii] and to write a report with specific recommendations on reshaping relations between Africa and France.[iv] Although his involvement was widely publicized and heavily criticized by some African intellectuals and activists[v]  in the run-up to the event, he stayed out of the debate on the day of the summit.

The discussion between civil society representatives and President Macron was rehearsed in advance. The 11 speakers carried Afrooptimist
beliefs, “anti-Françafrique” criticism and direct messages, and they took turns presenting their demands to the French president. The president, who was assisted by Elisabeth Moreno, the Minister for Gender Equality, Diversity and Equal Opportunities, then replied. The exercise was based on television talk shows with very meticulous lighting and visuals.

The continuation of the vision presented in Ouagadougou

The French president wanted this event to be “a radically new type” to “reshape the Africa-France relationship”. But this summit, which was supposed to be groundbreaking, was, however, part of the continuing communication around the changes in African policy in this five-year term. Entrepreneurship, civil society, diaspora, youth, new technologies, networking, promoting a “partnership relationship” and “opportunities” for economic cooperation were all key words at the heart of the discussions shaping this summit. On the other hand, there was little time for political issues, although some of them were broached on the civic engagement stage and during the plenary session.

This condensing of topics has helped to avoid controversy and substantive debates on the many sticking points, that the president skilfully managed to bypass when he was questioned, such as French support for some authoritarian regimes, military interventions in the southern Sahara, or the continued presence of French military bases.[vi]

In contrast, Emmanuel Macron seized the opportunity of this publicized and livestreamed dialog to reiterate some key aspects of his African policy. He also emphasized a renewed relationship between Africa and France, and a break with the previous “Françafrique” policy. This is demonstrated by his desire to move away from paternalism, although he refused to make a formal apology for French colonization in Africa. Likewise, artworks looted during colonization will be returned, as the president had already stated in November 2017 in Ouagadougou. In terms of political and economic cooperation, the president promised changes that were, however, restricted to a superficial reframing: so, people will no longer speak about “development assistance”, but rather of “solidarity investment”. Similarly, the French Development Agency, a key actor of the French development policy, will be renamed, as suggested by La République en Marche deputy, Hervé Berville, in his “Modernization of the Partnership-Based Development Policy[vii]" report in September 2018. The establishment of a Democracy Support Fund provided with € 30 million over three years, as well as the foundation of a “House of African Worlds and Diasporas” in Paris were also announced, which are the first two recommendations in Achille Mbembe’s report, and bodes well for other decisions.

A diplomatic tool in support of "Macron's" style of politics

In keeping with his wish to break with traditional methods, President Emmanuel Macron wanted to hold the 2021 meeting in Montpellier under the banner of transparency, horizontality, and renewed relations between his country and Africa. Some heads of state have also questioned the very description of this meeting as a real “summit”.[viii] In this case, we can legitimately ask what is a diplomatic summit?

Since the first summit between the heads of state of France and African countries in 1973, which was initiated by President Georges Pompidou, these official meetings have taken place alternatively in France and an African capital. These meetings were an opportunity for members of the political elite to reshape diplomatic ties, discuss political issues and broach sensitive topics sometimes behind closed doors. For this 28th meeting, the format for different times of the day, the depoliticization of debate, but also the exclusive targeting of non-diplomatic speakers, leads us to ask a series of questions about the future of these widely publicized meetings to announce major trends in France’s African policy: has this “unconventional” organization of the 2021 summit signaled the beginning of a real reformatting of summits and even discussions between Africa and France? Does this meeting signify a change in the course of diplomacy, or should this summit only be considered as a means of communication?

Some answers actually emerge when we consider who Emmanuel Macron was addressing. According to him, the people of Africa, its civil society and its youth. However, the sidelining of his African counterparts at this meeting already contains a message for them, against a tense diplomatic background with Mali and Algeria: would it be possible to do without the African leaders and work with civil society?

A key theme of the October 8 speech, the “diasporas” are specifically targeted and called upon to be the cornerstone in the relationship between Africa and France. The use of quotation marks is warranted by the broad definition and the approximate figure given by Emmanuel Macron: “seven million French citizens whose lives are linked to Africa”. Like all his predecessors since Mitterand have asserted, Emmanuel Macron wants to get rid of “Françafrique” and speak directly to Africa in France.[ix] Finally, in a context of geopolitical reconfiguration in Africa, it is debatable whether the French head of state has not indirectly adopted a stance in relation to his Chinese, Russian and Turkish counterparts, by emphasizing the competitive advantage conferred upon France by its “share of Africanness".[x] Indeed, in recent years, these three countries have managed to use the summit process as a diplomatic tool for influence and power projection.

Despite the talk around the groundbreaking aspects of this New Summit, it is necessary to place it in a broader political and diplomatic context, specifically characterized by the Summit on Financing African Economies in May 2021. Will Emmanuel Macron continue this policy of dual summits? From January 2022, France will hold the rotating presidency of the Council of the European Union when the Africa-Europe Summit, which has been postponed for two years due to the Covid-19 pandemic, will be held. This approach highlights the president’s commitment to place France’s African policy within a European and multilateral approach, and indicates that he has not completely broken with the diplomatic process.[xi]

[xi]. The authors would particularly like to thank Ysé Auque-Pallez for her help in arranging their attendance at the summit.

NATO Took Some Knocks But Survives Its 70th Anniversary...