Xi Jinping’s announcement of carbon neutrality is impeccably timed, but the hard part lies ahead. 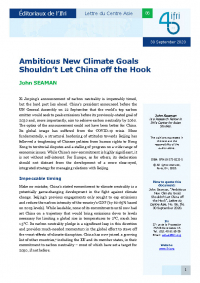 China’s president announced before the United Nations (UN) General Assembly on September 22 that the world’s top carbon emitter would seek to peak emissions before its previously-stated goal of 2030 and, more importantly, aim to achieve carbon neutrality by 2060. The optics of the announcement could not have been better for China. Its global image has suffered from the COVID-19 crisis. More fundamentally, a structural hardening of attitudes towards Beijing has followed a toughening of Chinese policies from human rights to Hong Kong to territorial disputes and a stalling of progress on a wide range of economic issues. While China’s new commitment is highly significant, it is not without self-interest. For Europe, as for others, its declaration should not distract from the development of a more clear-eyed, integrated strategy for managing relations with Beijing.

Make no mistake, China’s stated commitment to climate neutrality is a potentially game-changing development in the fight against climate change. Beijing’s previous engagements only sought to cap emissions and reduce the carbon intensity of the country’s Gross Domestic Product (GDP) (by 60-65% based on 2005 levels). While laudable, none of its commitments until now had set China on a trajectory that would bring emissions down to levels necessary for limiting a global rise in temperatures to 2°C, much less 1.5°C. Its carbon neutrality pledge is a significant leap in this direction and provides much-needed momentum in the global effort to stave off the worst effects of climate disruption. China has now joined a growing list of other countries, including the European Union (EU) and its member states, in their commitment to carbon neutrality – most of which have set a target for 2050, if not before.

It is a timely declaration for the planet, but Beijing also has a history of falling short on if not breaking its promises (see Hong Kong), and timely action will need to follow timely words.

The timing is also opportune for Chinese diplomacy and could not have been chosen by chance. Beijing has found itself increasingly isolated internationally and desperately needs a way to change the narrative. The COVID-19 pandemic and Beijing’s outsized influence at the World Health Organization (WHO) have undermined trust in China’s commitment to true multilateralism as a solution to global problems.

Beyond the current crisis, a “backlash” against China’s more assertive foreign policy has brought major shifts in policy orientation among significant foreign partners in recent years, from Australia to India to Europe, which have accompanied an outright tanking of United States (US)-China relations. This declaration allows China to paint the United States as a climate disrupter, taking advantage of a window of opportunity that may close quickly depending on results of American’s elections in November. While Beijing has sought to profit from a generalized discontent with Trump’s America, it has largely failed to draw Washington’s partners closer to its own orbit. Indeed, the most recent EU-China summit didn’t hide the growing litany of concerns from the European side, from trade and economic imbalances to human rights to the environment.

Chinese diplomacy desperately needs a win, and climate change is often seen as a relatively “easy” one (though nothing will be easy about achieving carbon neutrality, in reality). In its relationship with Europe, at least, it allows Beijing to grab on to some “low hanging fruit”, as climate is often the first (and sometimes the only) area to be identified from the European side as a necessary field of cooperation. This also comes at an opportune time, when the EU is considering the implementation of a carbon border tax that will most certainly impact China’s access to one of its most important export markets. China’s new commitments to climate neutrality will surely be used to negotiate better terms of access to the European market should the border tax be put into effect.

For a clear-eyed approach to China, even on climate

China’s now-stated goal of carbon-neutrality must be roundly applauded, and the colossal efforts that the Chinese people will have to make to achieve it need to be recognized. Still, now is not the time to lower the guard and declare China as an all-weather partner, even on climate. Declarations of intent are important, but everything remains to be clarified on just how China will achieve its goal. This is where the line between partner, competitor and rival becomes blurred.

First, it would be helpful for China to demonstrate the seriousness of its long-term commitment by clarifying and even upping its first, shorter-term goal of peaking carbon emissions “before 2030”. Some government think tanks in China are pushing to set this goal as early 2025, a scenario facilitated by a broad industrial restructuring and the rise of the service-based economy. Yet, the 250 gigawatts (GW) worth of coal-fired power plants now under development across the country (more than the entire generating capacity of the United States) leave much room for skepticism. The COVID-19 recovery will only complicate this further. According to the Intergovernmental Panel on Climate Change, meanwhile, global carbon emissions must be halved by 2030 and net zero achieved by 2050 if we hope to reach a 1.5°C target.

Another point of clarification will be on the fate of China’s overseas investments in coal and other polluting industries in its definition of carbon neutrality. To date, China has massively invested in the roll-out of coal abroad, with Chinese banks providing as much as USD 50 billion since 2013, adding an estimated 26.8 GW of generation capacity. A further 70 GW are estimated to be in the pipeline. Delocalizing pollution (as was previously done in many of today’s post-industrial economies) is not a workable solution to climate change, an issue that has become evident in Europe’s debate over a carbon border tax.

Then come more structural issues. It’s inconceivable that China, or any country, can enact such profound changes to the structure of its economy without significant state involvement, but until now Chinese policies have produced considerable market distortions that have undercut competition from Europe and globally. On the subject of climate, the story of solar panels is a well-known example. As we delve into the details of how China and others will achieve carbon neutrality, many of the thornier economic issues that have plagued Europe-China relations, including market access, forced technology transfer and IP theft, will rear their ugly heads. It is nice to talk about combatting climate change as if it existed in a separate policy sphere, but policy silos are precisely what has handicapped European diplomacy from operating at a more strategic level. In other words, relations with China on climate change cannot be treated as fundamentally separate from the rest.

Herein lies the rub. Cooperation with China on climate change is a global necessity, but it is also in China’s interest to cooperate. We must recognize that China’s efforts, ambitious as they may be, are not without self-interest. The impacts of climate change will be disproportionately felt in China. Already, COVID-19 has demonstrated the disastrous effects of an increased incidence of diseases of which China is a prime incubator, while devastating floods across southern China this summer further show just how vulnerable the country is to climate disruptions. Moreover, China has also sought to position itself as a leader on technology-based solutions for fighting climate change – from nuclear to hydrogen to renewable energy, and the digital technologies that will play a key role in optimizing supply and demand efficiency. The technologies it is developing are not only for domestic consumption, but need global markets to flourish. Indeed, China has a vested interest in driving a global energy transition as a way to facilitate its own economic transformation.

For these reasons and more, China needs progress on the global climate agenda just as much as the rest of the world needs China’s active participation. As such, China should not be let off the hook on other issues of vital importance simply for the sake of cooperation on climate change.

Naval Combat Redux: A Renewed Challenge for Western Navies
END_OF_DOCUMENT_TOKEN_TO_BE_REPLACED
Is the UN Security Council still relevant? France and Japan's views on the future of...