The Taboo of the Armenian Genocide, Part One: Global Reaction and American Inaction Repères sur la Turquie, No. 14, June 2016

In the Syrian refugee crisis enveloping Europe, Turkey has become the bottleneck toward which migrants are flowing into Europe, a factor increasingly important for Germany in particular. Relations have been strained, however, due to disputes over the possibility of lifting visa requirements. 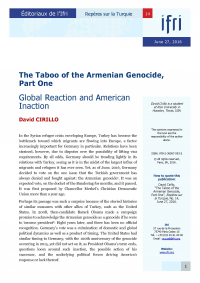 By all odds, Germany should be treading lightly in its relations with Turkey, seeing as it is in the midst of the largest influx of migrants and refugees it has ever seen. Yet, as of June, 2016, Germany decided to vote on the one issue that the Turkish government has always denied and fought against: the Armenian genocide. It was an expected vote, on the docket of the Bundestag for months, and it passed. It was first proposed by Chancellor Merkel’s Christian Democratic Union more than a year ago.

Perhaps its passage was such a surprise because of the storied histories of similar measures with other allies of Turkey, such as the United States. In 2008, then-candidate Barack Obama made a campaign promise to acknowledge the Armenian genocide as a genocide if he were to become president. Eight years later, and there has been no official recognition. Germany’s vote was a culmination of domestic and global political dynamics as well as a product of timing. The United States had similar timing to Germany, with the 100th anniversary of the genocide occurring in 2015, yet did not act on it; as President Obama’s term ends, questions loom around such inaction, the possible action of his successor, and the underlying political forces driving America’s response or lack thereof.

Germany became the 27th country in the world to officially acknowledge the Armenian genocide on June 2nd of 2016. This important declaration acknowledges the genocidal massacre of an estimated 800,000 Armenians by the Ottoman Empire in 1915 (with most reports varying from 500,000 to 1,500,000 killed), a position denied by modern Turkey since the Republic was founded. Its recognition by nationally representative bodies such as the Bundestag pits German recognition against official Turkish accounts. Merkel herself signified support for the measure via her vote in favor during a preliminary straw poll held by the CDU. She was not present during the actual vote due to scheduling conflicts, but also, perhaps, in an effort to avoid further confrontation with Turkey on an individualistic level. The Turkish Ambassador to Germany, Hüseyin Avni Karslıoğlu, was immediately sent back to Ankara for consultations, a step Turkey is known to take after countries recognize the genocide, having done as such to France, Italy, Austria, Brazil, and even countries considering it, such as the United States in 2010. However, Prime Minister Binali Yıldırım released a statement, “Turkey and Germany are two important allies. No one should expect a full worsening of our relationship with Germany because of this kind of a decision. But this does not mean that Turkey will remain indifferent and silent against such a move”, signaling a lesser penalty despite the need for some sort of response. Germany is the largest foreign investor in Turkey, and in 2015, Turkey exported over 14 billion euros worth of goods to Germany, meaning a break could hurt both countries. On June 8th, Turkish official Ibrahim Kalin confirmed that Turkey is “preparing an action plan” against Germany via the foreign ministry. The plan itself has yet to be revealed, but there are signs of small-scale retaliation; on June 23rd, Ankara officially restricted German members of parliament from visiting Incirlik airbase in Turkey, where over 250 German soldiers are located.

The plan could consist of severing diplomatic ties, ending bilateral or international cooperation agreements, or halting projects and German land contracts in Turkey. When France passed a law proclaiming it a crime to deny the Armenian genocide, Turkey recalled its ambassador, cut off all bilateral and international cooperation contracts, and put an end to military contracts as well as French use of Turkish naval ports and airspace. Although possible with Germany, this would prove increasingly complicated due to NATO operations and bilateral agreements involving both operations against the Islamic State with German tornado aircrafts and in halting migration from Turkey to Greece. Turkey is also invested in the almost three million German residents with Turkish origin, lessening attempts at formal Turkish retaliation. Specific sects of the same population have staged protests and threatened members of parliament who voted for the resolution. If such formal measures are taken, however, the results could prove dangerous for Germany and the entire EU, as well as possibly for Turkey.

The Politics of American Recognition

Perhaps similar retaliation, as well as the fight against bodies such as the Islamic State, is what has stalled the United States from recognizing the genocide over 101 years later. In a 2015 survey by Zogby Analytics, a plurality of Americans who were aware of the Armenian genocide were in favor of the United States calling “on Turkey to publicly admit the Armenian genocide”, while a plurality, albeit at 39%, agreed that the United States should release a resolution in recognition of the genocide. In both of these questions, the second highest answer was not a rejection, but indecision, stating, “I don’t know”. A plurality of Americans already aware of the Armenian massacres believes it to be genocide and that America should act on it. Furthermore, there are estimated accounts of more than one million Armenians in the United States, second only to Russia in number. And yet, the government has not acted in such a manner. This being said, a majority of Americans aren’t even informed on the genocide, according to the same survey. Therefore, it seems as if, despite there being a constituency and plurality on which to act, the government also has a majority that is ignorant to the matter. The genocide being on the backburner in Congress and for the President, therefore, isn’t as large a political issue for most groups.

Despite this lack of widespread knowledge, the Armenian genocide has been brought up again and again, on the local, state, and federal level. In 2007, while over two hundred members of the House of Representatives supported and even sponsored a bill recognizing the Armenian genocide, many abandoned it, leaving it to fail before it could even be voted on. Then-Senator Obama agreed with such sentiments, stating, “For those who aren’t aware there was a genocide that did take place against the Armenian people. It is one of these situations where we have seen a constant denial on part of the Turkish Government and others that this occurred”. In 2010, the House of Representatives Foreign Affairs Committee, a preliminary committee in Congress made up of selected specified representatives in order to allow bills to move toward a full vote, voted in favor of the resolution. There are forces in play in American politics that are both pushing such measures to the national forefront, but also making them ultimately fail at the finish line. As goes representative democracy, there are political action and interest groups that have powerful sway. In regard to the Armenian genocide, these groups tend to be the Armenian lobbies, Turkish interest groups, and Israeli action groups. And they get results. The methods differ between lobbying via Americanized grassroots organizations, results of the diaspora, and direct foreign government lobbying. The former is a method more associated with Armenia, the latter with Turkey. As both lobbies play the game of American politics, how will the pieces fall? America is a diverse nation, with many Armenians and Turks and various other nationalities represented in its patchwork, and yet this politik surrounding recognition tends to end the same way time and time again. Why? Surely ask the politicians, but don’t forget about the lobbies.

To keep reading this editorial, please download the file below.

Higher Renewable Energy Targets in Germany: How will the...
END_OF_DOCUMENT_TOKEN_TO_BE_REPLACED
Is the UN Security Council still relevant? France and Japan's views on the future of...