Connectivity in Central Asia at the Crossroads of International Crises: Transport, Energy and Water from Interdependence to New Cooperation Ways Russie.Nei.Reports, No. 41, Ifri, November 2022

From the reestablishment of an Islamic Emirate in Afghanistan by the Taliban to the war in Ukraine, not forgetting climate change, the most serious international crises, whether circumstantial or systemic, are having a severe impact on connectivity in Central Asia with regard to transport, energy, and water. 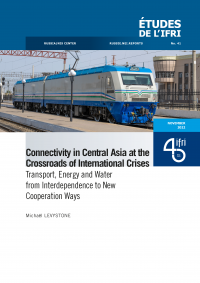 While the search, which is an existential one for the countries of this landlocked region (Kazakhstan, Kyrgyzstan, Tajikistan, Turkmenistan, and Uzbekistan), for foreign partners has been legitimized and even encouraged by the troubling context in which they are evolving, the steps they have taken in this respect since the outbreak of the war in Ukraine on February 24, 2022, show an obvious desire to bypass Russia, which has been heavily sanctioned by the West.

As a result, Central Asian transportation networks are developing in two directions: to the west, with Kazakhstan and the Caspian Sea as key links in Sino-European trade routes; and to the south, whether by sea (development of port links from Kazakhstan and Turkmenistan to Azerbaijan and Iran) or by land (creation of a railway line between Uzbekistan, Afghanistan, and Pakistan).

In the energy sector, Kazakhstan, hindered by Russian blockades of its main oil pipeline, is turning to the Caspian Sea in order to be able to continue transporting oil to European markets. Turkmenistan exports its gas to the Chinese and South Asian markets, where its projects, but also those of Kyrgyzstan and Tajikistan in the field of hydropower, are being hampered by developments in Afghanistan.

Lastly, the question of water highlights the paradox of interdependent countries that are divided between those that control Central Asia's water resources (Kyrgyzstan and Tajikistan) and the rest, located downstream of the Syr Darya and the Amu Darya (Kazakhstan, Uzbekistan, and Turkmenistan). While a growing number of initiatives are being launched to promote smart management of the region's significant water resources, this remains the most polarizing issue in Central Asia, despite its urgent nature.

Michaël Levystone is an Associate Research Fellow at Ifri’s Russia/NIS Center. His research deals with the republics of Central Asia (Kazakhstan, Kyrgyzstan, Tajikistan, Turkmenistan, and Uzbekistan) and Russian foreign policy.

Higher Renewable Energy Targets in Germany: How will the...
END_OF_DOCUMENT_TOKEN_TO_BE_REPLACED
Is the UN Security Council still relevant? France and Japan's views on the future of...