Between Giants: The Sino-Indian Cold War in the Indian Ocean Asie.Visions, No. 103, December 2018 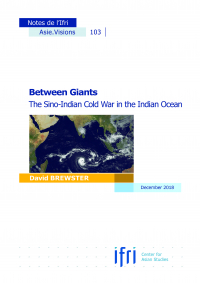 This will include pressure on Indian Ocean states to align themselves with one side or another within an increasingly unstable and complex strategic environment.

The series of political crises that occurred in the Maldives during 2018 presages significant future instability right across the region. These events demonstrated the influence wielded by Delhi and Beijing, but also the constraints they each face. The Maldives political crises began in February 2018, involving a “self-coup” by the Chinese-backed President Abdulla Yameen. Although this represented a further erosion in India’s traditional security role in the country, Delhi found itself with few good options to respond. But Yameen’s shock election loss in September 2018 to his opponent, Ibrahim (“Ibu”) Solih, demonstrates the power of democratic forces and the constraints that are also faced by China. It is another chapter in a long-term competition for influence that will likely be played out in different ways elsewhere in the region.

Indeed, it appears that as part of its Belt and Road Initiative, China will actively pursue all economic opportunities available to it in the Indian Ocean without significant regard for Indian sensitivities. Despite rhetoric of the “Wuhan spirit” that emphasizes Sino-Indian policy coordination in the region, there is no real sense that China should limit its opportunities or divide them with India. China is also pursuing infrastructure projects, including ports and airports, without regard for their short-term economic feasibility. This often involves large amounts of debt, corruption and/or the provision of political support for local leaders. These factors may make it difficult for non-Chinese players to compete.

Moreover, China encourages India’s neighbors to develop close political and security relationships with Beijing and opposes any suggestions that India should be allowed a sphere of influence in which it exercises special rights. In the long term, China has many strategic imperatives in the Indian Ocean that may drive a significant military presence in the region. This could range from full service naval/air bases to more discrete access/logistical support arrangements. But for the time being, Beijing will be cautious about being drawn into a direct security role in local conflicts, including domestic political disputes and disputes with India. The Indian Ocean is far away from China and its military position there is currently weak.

India has long-term aspirations to leadership of the Indian Ocean. Traditionally, it has perceived a sphere of influence in South Asia in which it plays a pre-eminent economic, political and security role. These aspirations are being increasingly tempered by the reality of China’s regional presence and economic power. India remains highly resentful of any Chinese economic presence or political influence in the island states of the Indian Ocean; however, it also recognizes that its short-term options may be constrained.

As this competition plays out, the Indian Ocean island states also exercise considerable agency. Some countries may try to insulate themselves from competition by declaring themselves “non-aligned”, but many will also seek economic or political benefits from the major players. Some will seek to balance against perceived Indian hegemony through economic and political relationships with outside powers such as China and Saudi Arabia. At the same time, China’s Indian Ocean partners will generally resist requests by Beijing to establish a security presence, although they may not be able to do so indefinitely. These factors point to an increasingly unstable and contested strategic environment.