Japan’s space program has evolved greatly since the end of the Cold War, driven by a rapidly changing geopolitical environment and tailored by the emergence of an “intra-alliance hedging strategy”. 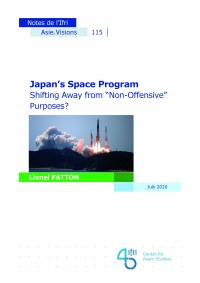 Concerns about the United States’ readiness and ability to fulfill its security commitments have led Tokyo to enact security reforms to enhance its value as an ally while moving toward a more autonomous defense posture to prepare for the worst-case scenario of abandonment. This has transformed the Japanese space program from one based on the principle of peaceful use of space to a program aimed at ensuring national security through non-offensive means.

The security track of Japan’s space program currently aims at boosting the combat prowess of the Self-Defense Forces (SDF) in accordance with the non-offensive principle, and at maintaining in all circumstances the ability to use space-based assets for this purpose. Therefore, the country is not militarizing outer space beyond what is necessary to guarantee the proper functioning of the SDF.

Japan has yet to join the big three in the 21st century military space race. Compared to the United States, China and Russia, Japan is still inhibited by domestic constraints when it comes to military-related affairs, and thus the use of space for security purposes. But, although Japan’s space program is today almost purely non-offensive in nature, the intra-alliance hedging strategy implies a potential weaponization of space, beyond the non-offensive principle. This offensive use of space could materialize through the acquisition of strike capabilities, and the development of Japan’s own anti-satellite weapons or of active defense systems for space assets.

Whether Japan will follow this path depends on a variety of factors. On the domestic side, political stability will be decisive for the swift adaptation of Japan’s space program to its environment. Internationally, the evolution of the United States’ grand strategy and involvement in the Asia-Pacific will be the most influential factor. The more Tokyo doubts Washington’s ability and willingness to fulfill its security commitments, the more intense its intra-alliance hedging strategy becomes, further penetrating and transforming the Japanese space program.

Building Bridges over the Blue Pacific. Beyond Marine...
END_OF_DOCUMENT_TOKEN_TO_BE_REPLACED
Asia after the War in Ukraine: Re-imagining multilateralism and the risk of...