5th Meeting of Heads of Government, Central and Eastern European Countries and China in Riga, Latvia 2016
Credits: State Chancellery of the Republic of Latvia, 2016
Justyna SZCZUDLIK

Seven Years of The 16+1: An Assessment of China’s ‘Multilateral Bilateralism’ in Central Europe Asie.Visions, No. 107, avril 2019

Since mid-2012, in the wake of the global financial crisis, China has sought to reinvigorate relations with Central and Eastern Europe (CEE), notably through the creation of the 16+1 formula. 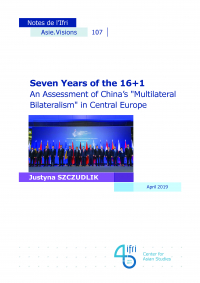 Seven Years of The 16+1: An Assessment of China’s ‘Multilateral Bilateralism’ in Central Europe Download
1.24 Mo

After seven years of existence, and in the context of growing concerns about China’s assertiveness, deepening US-China rivalry, and the EU’s more cautious engagement with the PRC, the time is right to assess the effectiveness of this formula as seen both from the Chinese and CEE perspectives. The 16+1 is another example of China-led multilateralism, which is an indispensable element of PRC foreign policy. This paper aims to assess the rationales, evolution and results of the 16+1 format, but also to imagine the future development of this formula.

The three main Chinese rationales behind this format are economic, political and normative. For the CEE, the reasons for taking part in this initiative were to find new export markets and sources of investment. Taking into account the fact that the Western EU – the main economic partner for the CEE – was seriously hit by the financial crisis, the decision to open up new channels for contact with China was reasonable. But not less important were political rationales, such as catching up on relations with China as a rising global power and in that sense upgrading the CEE’s political position in Europe and within the EU.

The 16+1 has evolved as a result of CEE and EU pressure, but also because of China’s changing political motivations. In this sense, the formula is rather dynamic. Among new features of the 16+1 are the processes of “EU-ization”, stronger bilateralism, loose institutionalization, and CEE attempts to make the format less China-centric. Among other changes are China-led endeavors that suggest the possibility of enlarging the formula (e.g. recent rumors about including Greece), expand its flexibility, multiply lower-level formulas and areas of cooperation, and also use the 16+1 as a political tool for furthering China’s (but also the CEE’s) interests. Both China and the CEE have proven eager to upgrade or downgrade the relevance of the 16+1 due to their own particular interests at a particular moment.

Results of the 16+1 to date have been both positive and negative as seen from China and the CEE. It seems apparent that the 16+1 has led to more political and normative results than economic ones. Indeed, economic outcomes mostly involve a trade surplus for China, which means an expanding deficit on the CEE side, and relatively insignificant Chinese investments in the region, with a small exception for the non-EU CEE members. When it comes to political and normative achievements, a positive outcome for China is the fact that the 16+1 was set up and functions normally, including examples of CEE countries that might be described as China’s political friends (e.g. Serbia and Hungary). China has become a significant player in Europe thanks to this format. While this could be assessed as a positive outcome for CEE countries that have managed to strengthen their relations with China, it also raises concerns about China’s increasing assertiveness. These concerns have given rise to doubts within the EU about this formula and the PRC’s role in CEE, but also a lack of willingness among CEE countries to institutionalize the 16+1 on the European side. Normative achievements that should be considered include political ‘slogans’ and initiatives that have been added to the 16+1 agenda. Among these are the Chinese-led Belt & Road Initiative (BRI) or connectivity, and the CEE-led Three Seas Initiative or Eastern Partnership.

This paper concludes by assessing the future prospects of the 16+1. Bearing in mind the rising global concerns about China, including increasing US-China rivalry in Europe but also the EU’s more cautious approach to China and some 16+1 countries’ disappointment with this formula (especially Poland), the PRC is unlikely to seek an augmented role for the 16+1. What China is (and will be) trying to do is to improve relations with the EU and placate Brussels in the midst of the disputes with the US. In this sense, the profile of the 16+1 will likely be kept low so as to avoid inflaming concerns in Brussels and Western Europe. Rumors about Greece’s accession to the formula, if proven true at the Dubrovnik summit on 11-12 April 2019, might be promoted as the result of a Greek initiative (which vindicates the 16+1 relevance) and a consensus reached by all participants, but not as a Chinese attempt to divide Europe. At the same time, the format could be used by China to convince CEE countries not only to avoid decoupling with China but also to improve China’s image and gather support for Chinese-led initiatives. It seems that this is the reason why the next 16+1 summit is scheduled in April 2019 (this time in Dubrovnik, Croatia, where an EU-funded bridge is being built by a Chinese company, a project that will be presented as a success story of the 16+1 and EU-China relations), a few days after the EU-China summit (9 April) and just before the second international BRI forum, to be held in Beijing at the end of April.

Justyna Szczudlik is Head of the Asia-Pacific Program (since 2016) and China analyst (since 2009) at the Polish Institute of International Affairs (PISM).