In Kenya, corruption results from a confusion of public and private interests that is specific to the neo-patrimonial logic in place since British colonization. The strong moral and political ethnicity that characterizes the country fuels an ambiguous relationship between the population and the elite. 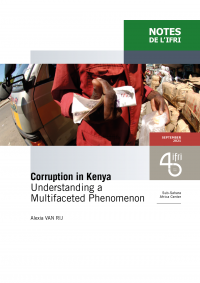 While the abuses of leaders are widely condemned by citizens, many of them show resignation and even tolerance in the face of the phenomenon, from which they paradoxically sometimes feel the beneficiaries. In this context, the fight against corruption appears above all as a means of discrediting political opponents by the citizens–to maintain power–, and to reassure international investors–to maintain wealth.

This note refers to the concept of neo-patrimonialism, developed by J.-F. Médard in 1991 to characterize sub-Saharan African governments, and describe a situation where the State, while claiming to be modern, combines public and private norms, as opposed to the Weberian bureaucratic State that is based on impersonal rules. The result is the personification of power and the accumulation of resources (power and wealth) for private purposes by a small group of influential people in pursuit of their personal interests rather than the common good.

The objective of this paper is to highlight the complexity of corruption by analyzing its various forms in a specific case, contemporary Kenya, where it is part of a neo-patrimonial political system characterized by strong moral ethnicity and intense political struggles.

Higher Renewable Energy Targets in Germany: How will the...
END_OF_DOCUMENT_TOKEN_TO_BE_REPLACED
Is the UN Security Council still relevant? France and Japan's views on the future of...