Over the past four years, international coal trade has been reshaped by China’s surging imports. 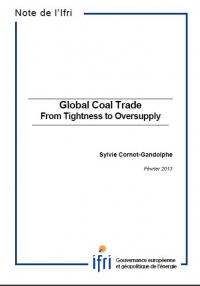 China, which was still a net exporter in 2008, became the world’s first coal importer in 2011, taking over the position that Japan has occupied for three decades. Its imports have continued their rising trend and reached a record level in 2012, despite the country’s economic slowdown. China imported 289 million tons of coal in 2012, up 30% over 2011. It now accounts for 23% of global imports. Although China is the world’s largest coal producer, several factors have contributed to the sudden rise in its imports, including the higher cost of domestic coal relative to international prices and bottlenecks in transporting domestic coal to south-eastern provinces.

More recently, another event shook the international coal business: the United States have been back on the market. The collapse of U.S. gas prices, to $4/million Btu in 2011 and even $2.75/million Btu in 2012, linked with the “shale gas revolution”, has made coal uncompetitive in the electricity sector, its main outlet on the U.S. market. U.S. coal demand dropped 4% in 2011 and 11% in 2012. The reduction in domestic demand has forced U.S. miners to look for overseas outlets. Their exports surged by 31% in 2011 and 16% in 2012. They reached 112 million tons in 2012, more than twice the level of 2009. The United States, which almost disappeared from the international steam coal market in the 2000s, have regained a larger share of the total coal export market, 9% in 2012, against 6% in 2009.

These developments, although not directly linked, have a huge impact on the global market and pricing of coal. Chinese imports have helped the market to quickly recover from its low level of 2008/2009. The speed and magnitude of China’s coal imports even shifts the market from a sluggish to a tight situation. Prices started to rise after their collapse in the second half of 2008 caused by the economic and financial crisis. Competition between buyers developed. In 2011, the market was very tight, and prices jumped by 18% in Asia and 32% in Europe relative to their average in 2010. The surge of U.S. exports in the past two years removed the shortfall of coal on the global market. Despite a robust 12% growth in imports in 2012, the global market has rapidly moved from tightness to oversupply. Prices dropped by 19% in Asia and 24% in Europe in 2012. Major mining companies all around the world struggle with cost pressures and poor or negative financial results. Is this situation sustainable? Will China continue to import at the same pace? Will the United States play their traditional role of a swing supplier and withdraw from the market?

This report looks at these issues and reviews recent developments in global coal trade. Chapter 1 provides an overview of steam and coking coal trade at the worldwide level and explains the evolution of steam and coking coal prices. Chapter 2 looks at major coal importing countries and analyses recent changes in their import patterns. The key role of China is emphasized. Chapter 3 provides an overview of major exporting countries and analyses their export strategies. A special focus is put on the U.S. market.

Modernization of the Bundeswehr: Back to basics?

More Europe in the face of realpolitik’s return? French...

A Guide to Solve EU’s Hydrogen Dilemmas
END_OF_DOCUMENT_TOKEN_TO_BE_REPLACED
The EU’s Power System by 2030: Navigating the Crisis and Keeping the Decarbonization Cap...