Between crisis and responsibility: a first assessment of the new German defense policy Note du Cerfa, No. 127, December 2015

Since the speeches delivered by President Joachim Gauck, Minister of Foreign Affairs Frank-Walter Steinmeier and Minister of Defence Ursula von der Leyen at the 2014 Munich Security Conference, Germany has seen a debate on new responsibilities in its foreign and security policy. 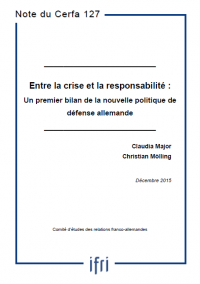 This new ambition, changes in the international environment, and national challenges have combined to shape German policy ever since. Two years after the new government took office and formulated its ambitions, the time has come for an evaluation: In what respect and how has German defense policy changed?

Although much progress has been made, it is difficult to distinguish a homogeneous new policy. It appears that the evolution of defense policy is being driven to a large extent by both internal and external crises. A new “policy of responsibility” is mostly visible when it concerns matters where events or partners put pressure on German politics: operations and defense cooperation, Ukraine, ISIS, or the necessity to save on materiel.

At the same time, the debate on German responsibility has enabled the pressure on German security policy, resulting from the recent crises, to be channeled in the right direction: toward a greater German contribution to international security. The challenge now consists of merging the notion of “responsibility” and the crisis-driven pressure in a way that leads to the development of a new and coherent German defense policy. Defining what exactly assuming responsibility means, along with the necessary political, military and financial changes, will clarify the work that Berlin must still complete. It will also help to clarify the role lying ahead for Germany’s partners in security policy, who are hoping for even greater German engagement.

A Democratic tour de force: How the Korean State...

European public opinion on China in the age of COVID-19:...

The Franco-German Armaments Cooperation. An Impossible...