Developing economic relations with GCC countries has become a consistent objective of the Turkish government since the coming in power of AKP. They have been successful in rallying part of the Turkish business community to this objective, thus building an internal social consensus towards opening to the Gulf. 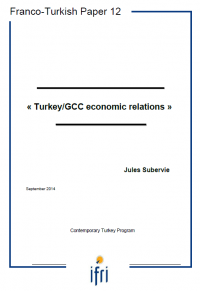 Being aware of the economic successes of GCC countries and of its own economic weaknesses, Turkey has thus persistently worked on developing exchanges with over the last decade – starting with the signing of an Economic Cooperation Framework Agreement in 2005. Bilateral and multilateral meetings are being regularly held in order to foster rapprochement and sustain the momentum.

As a result, Turkey / GCC exchanges have steadily increased in a win-win dynamic:

- Turkey crucially depends on the GCC to provide energy and foreign investment. The so-called “Turkish model”, combining social Muslim values, democracy and market economy, has gained attention in the region, attracting more and more tourists from the Gulf.

- GCC countries, experiencing the global economic crisis and a food crisis in 2007- 2008, have been drawn to invest in several agricultural projects in Turkey, to reach for arable land and ensure new food supply. Some also consider investing in the energy sector, one with a strong growth in Turkey.

- For Turkey, economic relations are also a tool to achieve the “zero-problem with neighbours” foreign policy objective.

Yet several variables cast a shadow on future cooperation between Turkey and GCC countries. Negotiation for a FTA started in 2005. They have been lagging behind and appear difficult to finalize in the current environment.

- At domestic level, Turkey’s economic environment is becoming shaky (impact of recession in the EU and conflicts in the Middle East, strong depreciation of the lira, corruption scandals affecting the government’s credibility, protests against Prime Minister Recep Tayyip Erdoğan).

- At regional level, some of Turkey’s recent foreign policy stances have negatively impacted relations with the GCC. The corruption scandals also revealed Turkey’s ambiguous treatment of Iran, who seems to have become a major economic target for AKP.

- Under such circumstances, Turkey’s constant efforts to position itself as a pivot between energy producing and consuming countries notably depend on the upgrading of its relations with GCC countries.