At times of TTIP negotiations, the American food industry frightens the Europeans. Having elaborated marketing practices and also unhealthy foodstuffs, it is largely kept responsible for obesity epidemic which strikes the United States since the 1980s. however, the American civil society organized itself and the industrialists now have to act more carefully. What is the state of the balance of power today? 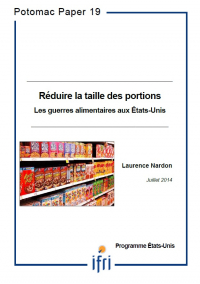 Today, the production of food in the U.S. follows industrial processes almost exclusively. The resultant standardization and declining nutritional quality of food products have been reinforced by the success of fast food chains since the 50s and 60s.

In the 70s and 80s, junk food consumption surged, due to the popularization of supersizing techniques. These were made possible through the launch of a new agricultural policy that includes federal subsidies for vast corn and soybean crops. Part of its success was also due to the emergence of the “non-living wage”, compelling poor workers and their families to eat cheap unhealthy food.

As a result of these policies and trends, the number of obese persons skyrocketed in the 80s. Studies show that the poor and vulnerable are more prone to obesity, meaning that the disease is statistically more prevalent in African-American and Latino communities. In 2012, 34.9% of the adult U.S. population was obese, and the epidemic has spread to the rest of the World.

In the early 2000s, experts and the media began to raise awareness of the issue. The general population began to react and the epidemic appears to have slowed in recent years. But the problem is by no means solved.

The most radical food activists believe that not only should the next Farm Bill reduce federal subsidies of large farms’ corn and soybean production (and presumably give them to organic fruit and vegetable producers), but the minimum wage should also be raised throughout the country. They also recommend restrictions on advertisement for junk food, especially when targeted at ethnic minorities, similar to the current ban on tobacco advertisement.

Conservatives are opposed to new rules and regulations on principle, instead preferring that individuals and companies take personal responsibility. This is what First Lady Michelle Obama has actually tried to enforce since 2010 through her “Let’s Move!” effort. She has encouraged large nutrition and physical activity education programs, as well as a constructive dialogue with actors in the food industry.

The latter are well aware that their image is currently very negative. They seem to hesitate between fighting and lobbying against any restriction to their current business model, or a bona fide effort to develop new solutions that would both preserve their business and respect public health.

Higher Renewable Energy Targets in Germany: How will the...
END_OF_DOCUMENT_TOKEN_TO_BE_REPLACED
Is the UN Security Council still relevant? France and Japan's views on the future of...