Are women going to vote massively for Hillary Clinton in 2016, the same way African-Americans voted for Barack Obama in 2008 and 2012?  This paper examines the different aspects of the gender gap in the US, social debates around women's issues and the way the Democratic candidate may approach the different segments of the American electorate. 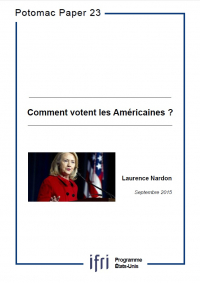 Are women going to vote massively for Hillary Clinton in 2016, the same way African-Americans voted for Barack Obama in 2008 and 2012 ?

American women, especially when members of a minority, tend to vote more than men for Democratic candidates. Topics on which this gender gap is particularly strong are the reluctance to send troops overseas and to condone environmentally risky practices, and, to a lesser extent, the support of redistributive policies and of some progressive moral values.

However, the identification process of minority voters with a candidate hailing from their ranks is limited : only voters that are Independent or undecided will join the candidate’s electorate in voting for him or her. Voters that consider themselves to be affiliated with the opposite camp will not cross party lines to vote for a candidate from their population group.

Hillary Clinton will probably not define her image around her gender in the present campaign, be it by adopting a masculine stance (her mistake in 2008), or by focusing on women’s issues. Indeed, the strength of her candidacy is linked to the way she can represent Americans of all stripes.

Nonetheless, Clinton will have to prepare specific talking points to accommodate the different subgroups of the feminine electorate. She will certainly direct part of her narrative towards white women, a segment of the electorate in which she stands to gain numerous voters.

Women’s issues are not equally present in the U.S. political debate. Whereas reproductive rights are regularly brandied during electoral campaigns, other issues of public debate such as working conditions, paid maternity leave or childcare mostly stay outside the political arena.

Although the academic debate currently tends to focus on Gender Theory, feminism remains active either through online issue-focused activism or through the theory of Intersectionality, held forth by self-described Black feminists.

After Mali, what Commitment from Germany in the Sahel?
END_OF_DOCUMENT_TOKEN_TO_BE_REPLACED
Critical minerals: How to secure stable and resilient supply chains? Views from Europe...