Rwanda’s Military Diplomacy. Kigali’s Political Use of the Military Means to Increase Prestige and Influence in Africa and Beyond Notes de l'Ifri, April 2022

Although it is one of the smallest states on the African continent, Rwanda has adopted a proactive foreign policy. Kigali has deployed troops within the framework of multilateral peacekeeping missions to increase its prestige and influence. Since last year, changes have arisen: Rwanda has extended its activities outside of multilateral operations, intervening unilaterally in the Central African Republic (CAR) and then in Mozambique. Rwanda desires to foster its reputation as a regional and continental “security provider”. 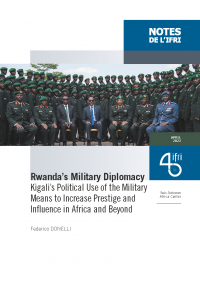 Rwanda’s leadership, led by President Paul Kagame, has used its seasoned and professional armed forces as a tool to (re)enhance its regional and international standing. The contribution  offered by Rwanda to multilateral operations sanctioned by the United Nations (UN) and the African Union (AU) on the continent and beyond has generated a favorable response – one that has helped tamp down criticism of Kagame’s authoritarian rule and Rwandan military involvement in the  neighboring Democratic Republic of Congo (DRC). The dispatch of Rwandan troops on a bilateral basis, beginning in 2020, to two African states highlights significant changes to Kigali’s modus operandi as it broadens its military operations beyond the multilateral  framework. Rwanda’s actions, first, in the Central African Republic (CAR) and then Mozambique’s Cabo Delgado province offer useful primers on the future design of Rwanda’s foreign policy. They also, as importantly, point to what may become significant shifts in the ways conflict management and peacebuilding are prosecuted in Sub-Saharan Africa. Further, Rwanda’s political use of military tools is a fascinating example of African military diplomacy.

Since the 1994 genocide, Kagame’s aim has been to rebuild a stable and strong state. Implementing a military diplomacy approach has been possible thanks to the skills shown in different scenarios of intervention by its army: the Rwanda Defence Forces (RDF). Since 2005, the RDF’s deployments mean that it has come to be viewed by African and international bodies as a reliable force for peacekeeping. But Kagame’s recent decisions to send contingents to both the CAR and Mozambique demonstrate that he sees the RDF as something of a new African security provider for the continent. Therefore, Rwanda has exploited the capabilities of its military apparatus as a political tool to gain greater international visibility and continental influence.

Its success against violent non-state armed actors has not only generated a great deal of positive press but has resulted in Rwanda strengthening its political and economic ties with the other African states. At the same time, Kigali has become a trustworthy interlocutor for external states such as France. The Rwandan regime aspires to promote “a Rwandan military solution to security problems” as an alternative to the architecture promoted by regional and continental organizations.

What is the rationale behind Kigali’s move? What  are its purposes? And how does Rwanda intend to capitalize on the means of military diplomacy? The analysis explores Rwandan policy by seeking to understand its real potential and investigating the implications of Kigali’s military diplomacy for the African security architecture.

This analysis is organized into four sections. The first part discusses Rwanda’s politico-military trajectory following the 1994 Rwanda Genocide.  The second section explores the recent shift in the Rwandan approach to armed conflicts in sub-Saharan African states. The RDF’s actions in Mozambique’s Cabo Delgado province and their success against armed insurgents are explored in greater depth in the report’s third section. The conclusion provides analysis about Rwanda’s pro-active use of its military in extra-regional states and what the implications may become at the regional, continental, and extra-continental levels.

Neither surveillance nor algorithmic consumerism. Towards...
END_OF_DOCUMENT_TOKEN_TO_BE_REPLACED
Citizen Mobilization: A Solution for Refugee Integration in Europe?