As China elaborates on the design of its "Belt and Road Initiative" (OBOR), the place of Europe within this project is slowly but surely taking shape. 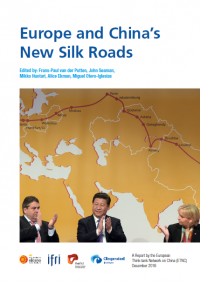 This report provides a comparative perspective of OBOR as seen from various European Union member states. The Chinese leadership officially launched the OBOR framework in autumn 2013, presenting it immediately as a key national concept and foreign policy priority for the years to come. This report covers the role of OBOR in the relations between China and fourteen EU member states, including all larger and many middle-sized countries, as seen from the European side. It does so by systematically treating three basic questions across a selection of EU member states and at the EU level itself:

This is the second report by the European Think-tank Network on China (ETNC), a network co-founded by Ifri and the Elcano Royal Institute in November 2014, and coordinated in conjunction with the Mercator Institute for China Studies (MERICS) and 14 other policy research institutes across Europe. The Netherlands Institute of International Relations ‘Clingendael’ provided key leadership in editing and publishing this second report.

Chapters of the report:

6. ‘One Belt, One Road’ Projects in Greece: A Key Driver of Sino–Greek Relations
Plamen Tonchev

10. Poland on the Silk Road in Central Europe: To Become a Hub of Hubs?
Justyna Szczudlik

11. Portugal and OBOR: Welcoming, but Lacking a Strategy
Carlos Rodrigues

14. ‘One Belt, One Road’ in the Swedish Context
Elin Rappe and Mikael Weissmann

15. The United Kingdom: A Platform for Commercial Cooperation
Tim Summers

Mitigating Geopolitical Risk – Japan as a Stabilizer in...
END_OF_DOCUMENT_TOKEN_TO_BE_REPLACED
Has the European Union risen up to the challenges of geopolitics? Europe after the Czech...