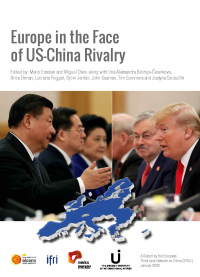 The European Think-tank Network on China (ETNC), of which Ifri is a founding member, has devoted its fifth year of meetings and research to analyzing – from a national, bottom-up approach – how the EU is responding to the increasingly geopolitical rivalry between Washington and Beijing. This report contains 18 country chapters, in addition to a perspective from the EU, on Europe’s difficult balancing act between the US, a long-term strategic and economic partner, and China, the EU’s second most important market and a rapidly solidifying economic superpower.

The various analyses in the report demonstrate how US unilateralism and Chinese assertiveness have triggered a rethinking of the EU’s strategic landscape. Despite the differences between EU member states, each of those analyzed are in a somewhat similar position: They all consider the US to be their most important ally, each depending to some degree on its military, but they are simultaneously trying to maintain and even enhance their economic engagement with China, albeit with more awareness of the strategic dimensions involved and with new defensive tools, such as the European investment screening mechanism.

The EU and its member states see trouble in their relations with both Washington and Beijing, and in the rivalry between these two partners, but they also seemingly need them both to enhance European prosperity. By performing this balancing act, the common European objective is to avoid a bipolar system in which EU member states are forced to pick sides on all relevant policy issues. This is reflected in the reluctance of many member states to issue a blanket ban on Chinese companies’ access to their 5G markets.

Within this context, a group of countries led by France, Germany and Spain is working with Brussels to enhance the EU’s strategic autonomy and economic sovereignty, including the capacity to autonomously develop critical core technologies, independent from China while managing or hedging dependencies from the US.

In the report, John Seaman, Research Fellow for Ifri’s Center for Asian Studies, examines the case of France. The growing tension between the US and China is taking place in a context of France’s shifting relations with each of the two countries. With the US, relations have grown more tense and complex in light of the unilateralist turn of Donald Trump, while at the same time there is a growing wariness of China, particularly given its ambitions on the global stage. Both Washington and Beijing remain key partners for Paris, though increasingly on different issues. France today remains undeniably tied to the US, but Paris is doing everything in its power to avoid having to make stark strategic choices and maintain its constructive relations with each of these two countries, hoping to salvage and reinvigorate what it can of a rules-based multilateral order. Meanwhile, France is seeking to strengthen its position through greater European cohesion and autonomy in the face of growing uncertainty.

The Political Economy of the Metaverse
END_OF_DOCUMENT_TOKEN_TO_BE_REPLACED
Critical minerals: How to secure stable and resilient supply chains? Views from Europe...