China's Soft Power in Europe: Falling on Hard Times A report of the European Think-tank Network on China (ETNC), April 2021

Analysis from 17 countries and EU institutions reveals that Chinese soft power in Europe – defined as the ability to influence preferences through attraction or persuasion – has seen better days. 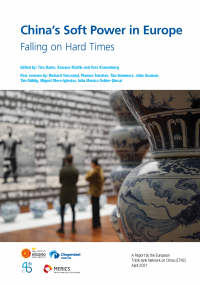 This report, which brings together experts from across the continent, is a collaborative effort of the 20 research institutes that make up the European Think-tank Network on China (ETNC), of which Ifri is a founding member.

Developing soft power has been a pillar of Chinese foreign policy since 2007 and remains a stated goal of China’s long-term policy orientation to 2035. The country-level analysis from the report identifies three prominent Chinese approaches to developing soft power in Europe:

Recently, and over the last year in particular, China has become more assertive in attempting to shape its image by expanding its toolkit, particularly to enhance its political messaging. This includes the systematic use of social media.

On the importance of China’s economy, the lines can often be blurred between the attractiveness of economic cooperation and the pressures of economic coercion. Withholding market access for European firms and products has long been an observed practice of reactive Chinese diplomacy, but an increasingly formalized development of sanctioning mechanisms, including “unreliable entity lists” and export control legislation, is a cause for growing concern. In other words, market access, trade and investment opportunities are perhaps the single largest factor determining China’s appeal in Europe, but also a major source of its coercive power.

Different patterns of Chinese soft power projections can be seen across four groups of countries analysed in the report:

A number of factors have driven these trends, from the fallout of COVID-19 to Chinese domestic developments (including in Xinjiang and Hong Kong) and the impact of growing US-China rivalry. These factors ultimately appear to be more substantive drivers of European perceptions and attitudes towards China today than the traditional sources of soft power.

In response, the Chinese government’s public messaging in Europe has become increasingly proactive, even aggressive, including through the imposition of sanctions. The report explains that these new methods, though deployed differently across the continent and aimed in part at a Chinese political audience, point to Beijing’s objective to increase its sway over Europe by influencing related discourse. They are presumably designed to prevent negative publicity and criticism, rather than achieve likeability. An open question can thus be raised: has China become less interested in growing its appeal than in exercising its influence?

In the report, Ifri’s John Seaman and Marc Julienne delve more deeply into the case of France.

They explain that China has sought to build its attractiveness and soft power in the country over the years through a number of channels, which include deepening linguistic and cultural connections, expanding its presence in French media, developing a network of elite connections, underlining the pull factors of its economy and, more recently, crafting a political narrative to suit rising discontent with the United States.

Despite these efforts, China’s soft power in France has been in steep decline, notably in the context of its aggressive public diplomacy in the country during the COVID-19 crisis and the broader attention this has drawn to China on other fronts, including human rights, and Xinjiang and Hong Kong in particular. This has been made particularly visible through recent data on public opinion, analyzed elsewhere for Ifri by Marc Julienne.

Amid a wave of criticism directed at China, building soft power no longer appears a prominent part of Beijing’s country-specific strategy in France, and while France’s political elite has been slow to respond to worsening public opinion, changes are afoot.

Discover this and all ETNC reports on the network's website: www.etnc.info.

Naval Combat Redux: A Renewed Challenge for Western Navies
END_OF_DOCUMENT_TOKEN_TO_BE_REPLACED
Is the UN Security Council still relevant? France and Japan's views on the future of...