A wide-ranging look at the way Gazprom interacts with an increasingly challenging global gas market for Russia. 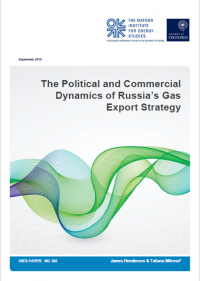 Russia has long been regarded as the world’s pre-eminent gas producer, both by virtue of its reserves base and the central role played by Gazprom, its state-owned ‘gas champion’ in the ‘matrix’ of domestic supply and consumption, and import and export gas trade-flows linking it to Central Asian and Western former FSU states as well as European gas buyers. The construction of this gas network in terms of the sheer scale of physical infrastructure involved and the management of the contractual and political – economic relationships underpinning it, represents a spectacular achievement by any standard. Gazprom, at the centre of this system, has become an important source of state revenue as well as an agent dealing with FSU customers in the sometimes tension-ridden post-Soviet landscape.

Markets, even physical commodity markets, do not stand still. As continental Europe followed North America and the UK before it down the path of gas market liberalisation and hub pricing, Gazprom’s oil indexed long term contract business model came under siege and has yielded. In its domestic market, the rise of ‘independents’ has eroded Gazprom’s market share to a remarkable extent. European gas market regulatory architecture re-design has clashed with Gazprom’s plans to construct ‘transit avoidance’ pipelines around the Ukraine, with whom it has long running disagreements on gas pricing. The prospect of high demand growth for gas in the European gas generation, against which Gazprom invested billions developing the giant Yamal field complex has turned out to have been a mirage. Slow post financial crisis Eurozone economic growth and the zealous pursuit of renewable energy policy on the part of Brussels has resulted in stagnant demand for Russian gas pipeline imports and, following the Russia-Ukraine tensions of recent years, a desire to diversify away from Russian gas.

Russia’s resulting campaign to access the Asian and specifically Chinese market, whilst sound in principle, has become bogged down in disagreements on contract pricing and route preference. The collapse in oil prices from late 2014 has crimped Gazprom’s cashflow outlook and narrowed its room for manoeuvre. The impending surge in Australian LNG exports and later this decade the expected surge in US LNG as a consequence of the shale gas revolution, add to the challenges of Gazprom in Europe and Asia.

This paper adds to the considerable listing of books and papers produced by the Oxford Institute for Energy Studies Natural Gas Research Programme on the subject of Russia, Gazprom and its interaction with the global gas system. In addition to the looking at its emerging challenges and threats, the paper also offers unique insight into the ability of Gazprom to respond to its changing business environment, whether strategically or reactively.

It is available on Oxford's Institute for Energy Studies' website: The Political and Commercial Dynamics of Russia's Gas Export Strategy

The Political Economy of the Metaverse
END_OF_DOCUMENT_TOKEN_TO_BE_REPLACED
Critical minerals: How to secure stable and resilient supply chains? Views from Europe...