Skip to main content
You are here
Home > Homeland Security

The porosity of borders has become a key characteristic of contemporary international relations. While this has long been recognized for trade and information networks, it also has an impact on the field of defense and security.

The impossibility of clearly separating internal from external threats is not a new phenomenon, as demonstrated by the many attacks of international origin that hit the Paris area during the 1970s and 1980s.

Although the concept of a defense and security continuum has reached a consensus since the publication of the 2008 Defense White Paper in France, there is still a need to anticipate future internal-external interactions and understand their implications for the French population’s collective security.

Established within Ifri’s Security Studies Center, the objective of the Homeland Security program is to study more specifically:

Director of Research and Communications, Editor-in-Chief of Politique étrangère, and research fellow at the Security Studies Center

La Guerre de vingt ans was awarded the Prize for the best book on geopolitics in 2021.

Once a Jihadist, Always a Jihadist? A Deradicalization Program Seen from the Inside Focus stratégique, No. 102 bis, February 2021

France has traditionally taken a security-based approach to the fight against terror. It was a latecomer to the field of radicalization prevention and the establishment of disengagement programs aimed at jihadists. It only started to think seriously about the issue in 2013 and its first...

Despite a relative weakening since 2017, the international jihadist movement should continue to pose a genuine threat over the next decade.

In the context of a persistent impunity enjoyed by organized crime and drug trafficking groups, many countries in Latin America, and especially Mexico and Colombia, have opted to assign military personnel to internal security tasks.

137 Shades of Terrorism. French Jihadists Before the Courts Focus stratégique, No. 79 bis, April 2018

This study, based on original judicial sources, assesses the profiles of 137 individuals sentenced in France for cases related to jihadism.

In the week following Trump’s election, Ifri published a study to identify the likely changes in U.S. foreign policy. From the outset, this election appeared as a change in the U.S.’ trajectory, with consequences on the power relations and functioning of the international system.

France vs. Jihadism: The Republic in a New Age of Terror Notes de l'ifri, January 2017

This paper assesses the current state of the jihadist threat to France, as well as the French authorities’ security response. With the upcoming presidential election, 2017 will be a decisive year for the country. Terrorism will be at the heart of the campaign and ISIS will most likely try to...

The 2015 terror attacks in France and the ensuing activation by the Ministry of Defense of its homeland protection plan opened a new phase in the long history of the French Army’s involvement in internal security. 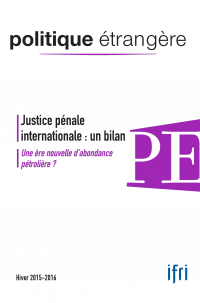 De-radicalization and the Prevention of Radicalization in Germany, Great Britain and Denmark Politique étrangère, Vol. 80, No. 4, Winter 2015

To date, a few thousand Europeans have left Europe to join jihadi fighters in Syria and Iraq. Several hundreds of them have already returned. To deal with this phenomenon, some countries have developed radicalization prevention and de-radicalization programs.

Since the beginning of the crisis in Ukraine, Russia has been waging an information war.

France is the Western country the most severely impacted by acts of terrorism. Some 1300 French citizens have left for Syria and Iraq, among which 330 have returned.

These luncheons debates are exlusively dedicated to corporate members and individual benefactor members or Ifri. By personal invitation.

By: Marc HECKER, interviewed by Michelle Clifford for Sky News

"Still now I have the images of the corpses next to my feet": Olivier Laplaud and his wife were in the Bataclan enjoying themselves amongst a crowd of 1,500 people when everything changed in an instant.

By: Marc HECKER, quoted by Andreas Noll in DW News

France has repatriated more than half the people it defined as radical Islamists living in the country without a residence permit since 2018. Now it wants to extend the penalty and deport even more.

By: Elie TENENBAUM, quoted by Voice of America / AFP

PARIS - France said Thursday it would suspend joint military operations with Malian forces after the West African country's second coup in nine months, adding to international pressure for the military junta to return civilians to positions of power.

Germany calls for closer cooperation with France over security threats

By: Paul MAURICE, quoted by Magdalena Pistorius in EURACTIV France

German Defence Minister Annegret Kramp-Karrenbauer has called for closer bilateral cooperation with France in light of the tense security situation in Europe marked by the Russian “threat”, the rise of China and spreading “Islamist terrorism” in the Sahel region.

In France, are soldiers outside the Eiffel Tower and the Louvre really worth it?

Sentinel represents a watershed development in French military operations. For the first time since the end of the Cold War, the number of French army soldiers actively deployed in metropolitan France roughly equals that of overseas operations. But the military establishment here is far...

NATO wrestles with internal divisions ahead of Warsaw summit

The alliance is struggling to assemble four battalions to safeguard its eastern flank from a possible Russian attack. In addition, many member states are falling short of their...

Jihad in Syria and in Iraq: a Сhallenge for France

One week after the terrorist attacks in Paris, the police killed two jihadists in Belgium. Officials said that the two men were coming back from Syria and were on the brink of targeting Brussels. The capital of Belgium was already targeted a few months ago: in May 2014,...

For the past two years, French experts on terrorism have felt anxious. They often emphasized: “The question is not whether France will be targeted by a terrorist attack, but when.” The dreaded attack took place on January 7th, 2015. That evening, various speakers across the...