It is not easy to step back and gain perspective on a battle that is raging on the home front for all of us and has not yet reached its peak. However, I do want to share some of my thoughts on the COVID-19 pandemic, especially its context. 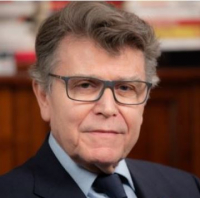 Rereading some of the "Perspectives" that I have been writing every year for nearly 40 years as an introduction to the Ifri RAMSES report, I found this observation, dated July 15 2008: "Today we can only state one thing with certainty: without a drastic and swift adaptation of global governance, major world tragedies will once again become possible and even likely." That is why I started the World Policy Conference, the first of which took place in Evian on October 6-8 2008 in the aftermath of the Lehmann Brothers’ meltdown. Today, as then, I consider the 21st century to have begun that year.

Why? Because, with the triumph of the ideology of "liberal globalization" and the rise of digital technology, the complexity of international relations burgeoned at the same time that borders became semi-porous walls. The strongest states, starting with the United States, and global companies that consider themselves to be above states, were the first beneficiaries, at least for a while. The characteristic of a complex system is that it is impossible to explain it completely, let alone control it. Complexity leads to radical uncertainty. In 2008 the spectre of another Great Depression loomed even though many Nobel Prize winners in economics considered their science to be advanced enough to preclude any return to such a scourge. Even as the damage of the financial crisis lingers, the COVID-19 pandemic reopens the prospect of a lasting economic catastrophe. Central bankers no longer put a limit on the amount of money but have no idea what their actions’ second or third consequences will be. As Laurence Boone, the OECD's chief economist puts it, common sense suggests "we must do everything we can to ensure that the machine does not break down, but idles, so that it can start up again as quickly as possible." If we let it break down, however many trillions of dollars are poured into it, that will be a different story.

Since 2008, the effects of complexity have continued to manifest themselves in all areas. I am moving on to classic geopolitics, such as in the Middle East or East Asia. In the field of climate, scientific understanding of global warming’s causes and effects is growing. But at the level of action, impotence reigns. The recent wildfires in California, Brazil and Australia are yet another warning. What are "decision-makers" doing about them?

The scope of the COVID-19 pandemic is as stunning as the failure of international cooperation that it has brought to light. It is not that the prospect of this kind of calamity had not been considered. The issue was discussed at many international conferences of a political nature. But, with few exceptions, governments muddle through the present rather than plan for the future—even those that constantly invoke the "precautionary principle" but remain under the influence of ideologies or lobbies. The 20th century’s biggest pandemic was the "Spanish flu"—misnamed, moreover, because it was as American as COVID-19 is Chinese. It killed twice as many people as the World War I. The collective consciousness would have been better served by keeping its grim memory intact. Various epidemics have broken out over the last 10 years, such as in Asia (SARS, 2003), Great Britain (swine flu, 2009) or West Africa (Ebola, 2014). Economically, the estimated cost of SARS, an epidemic much more limited than that of the novel coronavirus, is put at $40 billion.

With all these precedents and so many warnings, the current disaster is the most glaring manifestation of the neglect of state health policy and global governance in recent decades.

The key players in the international system are responsible for that negligence, starting with the United States, China and the European Union. Europe, in particular, is proving incapable of defining and defending its members’ common interests, let alone having any influence in world affairs.

If populism has gained so much ground on democracy in the West, it is because democracies have failed to organize globalization. Populism is the great beneficiary of inefficiency. Without a virtuous response, mainly in the United States and Europe, populism will grow and authoritarian regimes will have free rein to thrive and rebuild walls—or wage war.

And if it turns that they do no better than democracies in stemming the current pandemic, which is possible, this would not necessarily be to the advantage of peace and freedom.

The big issue of the coming years and decades, however, is not to put an end to globalisation. But for it to survive other health or perhaps digital pandemics (can we imagine a digital pandemic in the age of artificial intelligence?), states must focus on their primary responsibility, which is to ensure their citizens’ security in the broadest sense of the term. Defense, and therefore the armed forces, health, technology and currency, are at the heart of security and, consequently, of peace. In the face of Sino-American rivalry, the European Union is more necessary than ever, but it is rudderless. In any case, the few candidates for leadership have no followers. In the midst of the pandemic, Ursula von der Leyen boasted about the opening of accession negotiations with Albania and Northern Macedonia. Doesn’t she see how ludicrous any talk of enlargement is when the house is burning down? It is on the Union’s security that she, European Council President Charles Michel and the European Parliament must focus all their efforts.

NATO, as Emmanuel Macron said, is brain dead. However, its resuscitation can be imagined with a broad conception of security involving not only geopolitical interests identified in common with its members, but also climate, health or digital issues. Such an initiative should come from Europe. An alliance redefined in this way would be a heavy counterweight to the illiberal democracies. Such a project is hardly imaginable with Donald Trump, but America must be despaired of all the less because, without it, continental drift will inevitably continue. The continents will drift both apart from each other and within each other.

In the short term, the most effective means we have to beat the COVID-19 pandemic are logistical and medical. But the rundown state of health systems is stupefying, even in a country like France, which is breaking all public spending records to redistribute income but increasingly struggling to perform its traditional sovereign functions and relinquishing whole swathes of its sovereignty without receiving anything in return. The shortages of equipment and medicine are astounding. So is, once again, the failure of the precautionary principle and so much faint-heartedness, for example in the face of therapeutic solutions proposed by eminent doctors. It is like refusing to throw a lifesaver to a drowning man because the procedure for approving the lifesaver has not been completed.

When the time comes, the temptation of cowardly relief and oblivion must be resisted.

At the international level, may the weeks ahead engender new forms of solidarity that, after victory, will allow us to bounce back with a deeply reconceived vision of an inevitable multilateralism.