The signing in January 2009 of the gas supply and transit contracts between Gazprom and Naftogaz marked a turning point in Russian-Ukrainian gas relations: yearly intergovernmental, last minute and non-transparent winter deals were replaced by a predictable, long term commercial relationship. 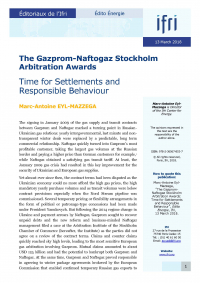 Naftogaz quickly turned into Gazprom’s most profitable customer, taking the largest gas volumes at the Russian border and paying a higher price than German customers for example,[1] while Naftogaz obtained a satisfying gas transit tariff. At least, the January 2009 gas crisis had resulted in this key improvement for the security of Ukrainian and European gas supplies.

Yet almost ever since then, the contract terms had been disputed as the Ukrainian economy could no more afford the high gas prices, the high mandatory yearly purchase volumes and as transit volumes were below contract provisions especially when the Nord Stream pipeline was commissioned. Several temporary pricing or flexibility arrangements in the form of political or patronage-type concessions had been made under President Yanukovych. But following the 2014 regime change in Ukraine and payment arrears by Naftogaz, Gazprom sought to recover unpaid debts and the new reform and business-minded Naftogaz management filed a case at the Arbitration Institute of the Stockholm Chamber of Commerce (hereafter, the Institute) as the parties did not agree on a review of the contract terms. Claims and counter claims quickly reached sky high levels, leading to the most sensitive European gas arbitration involving Gazprom. Mutual claims amounted to about USD 125 billion and had the potential to bankrupt both Gazprom and Naftogaz. At the same time, Gazprom and Naftogaz proved responsible in agreeing to winter package agreements brokered by the European Commission that enabled continued temporary Russian gas exports to Ukraine and safe transit to Europe. Following four years of procedure, the Institute has finally made two landmark rulings: an initial ruling on the price and take or pay dimensions in December 2017 and on the transit contract end of February 2018.

This analysis aims at briefly laying out the results of the arbitration and then at assessing its short and medium term implications.

Only a few persons have accessed and read the over 1000 pages of the final ruling and this analysis is based on the respective press releases and public statements from both companies. Nor can the author claim to have read the original transit and supply contracts between Naftogaz and Gazprom, which are well kept commercial secrets. Key results of the arbitration appear to include:

The Institute’s rulings appear to be rather balanced and reasonable in as much as none of the claimants has lost face. Naftogaz is the overall financial winner, will enjoy a much more favorable gas price that fully reflects European market levels, while Gazprom is facing the need to honor its ship or pay obligations for the transit while being reassured on the transit tariff level. And Naftogaz will have to buy again a certain amount of gas directly from Gazprom, via prepayments.

A quick settlement matters: no room for bad losers or triumphant winners

The immediate harsh and confused reaction by Gazprom to the verdict is a source of concern.[2] After the ruling and a second to midnight on 28/02, Gazprom returned Naftogaz’s pre-paid money and did not supply the small volumes it had ordered in the midst of a cold wave, prompting Naftogaz to purchase small volumes at higher prices in urgency from Poland, to introduce measures limiting consumption and get vocal about this serious incident and about the fact it faces insufficient pressure in the transit pipelines.[3] Gazprom also implied it would unilaterally terminate all contracts with Naftogaz, which would be a contract violation as it would take the two to agree on that and to follow a certain procedure. At the time of writing, Gazprom had not initiated such a procedure and Gazprom has not yet done any payment to Naftogaz and is rather sending signals that it contests the ruling: among others, Gazprom stressed that new supplies require the agreement on a contract addendum. While Naftogaz had sent over such a document to Gazprom, it was rejected as it did not suit Gazprom.[4] Bad faith? Losers resentment? Or an attempt to gain time? One can indeed presume the Institute’s ruling is clear and final.

Russia’s strategic objective to suppress dependence on the Ukrainian transit route is well understood and considered by some, including by Gazprom’s partners in the Nord Stream 2 project, as legitimate. Yet over the past two years, Gazprom has posted record high export levels to Europe and for 2017, will post a strong financial result as its average sale prices increased to almost USD 200/mcm. The paradox is that this was to a large extent thanks to the Ukrainian route which handled 50% of Gazprom’s total exported volumes to Europe in 2017. In spite of the ongoing Donbass war and the Crimea annexation, that route was highly reliable and flexible, especially in winter times as key to compensate for routine repairs on the Nord Stream or Yamal pipelines. Gazprom could hardly have been able to issue the many bonds at good yields and finance its Power of Siberia and Nord Stream 2 systems without a reliable transit through Ukraine. The USD 2.56 billion due payment barely represents about 4.4% of the total payments made by Naftogaz to Gazprom since the entry into force of the 2009 contracts (totaling around USD 58 billion) or about 15% of the total transit payments made by Gazprom since then. It also represents about 6% of Gazprom’s 2017 gas export revenues. And the stakes go way beyond this sum.

Gazprom’s initial reaction is even more surprising as part of the Nord Stream 2 project, it is striving to show that its gas is safe, reliable and needed, alongside additional and alternative transport capacities. And in many respects, it can be: Gazprom has proven to be highly reliable during the three key supply stress periods that occurred this winter, following the Forties pipeline system incident, the Baumgarten fire and most recently, the cold wave that has hit Europe and which has led to very high daily gas demand peaks and price tensions. Gazprom has met additional supply requests, put large volumes available on the spot markets and made huge profits in doing so. Fair game.

Against this backdrop, responsible behavior would consist in making a quick and silent settlement of the arbitration provisions and strictly obeying to the new conditions stemming from the ruling until the termination of the contracts.

The importance of continued gas reforms in Ukraine

Naftogaz has certainly very good reasons to be satisfied with the verdict: beyond the financial gain which it is entitled to cash in immediately, it can now enjoy much more competitive gas supplies for two years and be able to expect firm transit revenues until 31 December 2019. The USD 2.56 billion sum is equivalent to roughly one year of Ukrainian gas imports, totaling 14 bcm via reverse flows in 2017. Yet this is no triumph for the Ukrainian gas industry which must accelerate its deep reforms:

This relies on several reasons: the Nord Stream 2 system (including Eugal) may not be ready by 2020; Ukraine provides for winter flexibility and is a shorter route to several key markets; it is a much needed back up route for technical repairs or in case of accidents on the Nord Stream corridors.

Facing the possibility that transit volumes are being halved post 2020 is no tragedy for Ukraine. It would require less modernization investments for the system and Naftogaz can develop alternative sources of revenues which ultimately benefit the state budget via dividend payments, especially based on Ukraine’s own gas production potential. That responsibility lies on the one hand with Naftogaz, which has to make it happen with its subsidiary UGV and foreign investors, and on the other hand with the government, which has to lay the right fiscal and licensing conditions and let Naftogaz do its job. Moreover, Ukraine can make a good use of its gas storage facilities. Last but not least, Ukraine must end its internal disputes over how the unbundling should be conducted and over who controls financial flows. One thing should be clear: transparency, accountability and credibility are the only way forward.

Gazprom’s reaction to the ruling raises questions over what will happen on 01 January 2020. The European energy picture is no more the same as ten years ago. The energy transition has resolutely started and by 2050, fossil fuels in the European energy mix will have largely disappeared, including natural gas, which will then play a greater role in emerging economies to displace coal. The question is whether the decline of natural gas in Europe starts towards 2030-2035 or whether it comes earlier. To a large extent, if additional tensions or crises occur in relation to the transportation of Russian gas to Europe, that decline could come much earlier than expected.

Gazprom stands to lose most from a potential crisis on January 2020 when the current contracts end, although short term financial gains may be strong, as prices would surge. European customers would also lose much, but they would then draw the lesson quickly. Ukraine would also lose significantly in terms of transit revenues and ability to source gas. China, Japan, India and South Korea would lose as well, given that they would face LNG supply tensions and higher prices in the middle of the winter. The winner could be the United States (US), which would see a boost in its LNG exports, prices and revenues. Hence why US’s opposition to Nord Stream 2 is to the detriment of Europe’s interests: would the US act in good faith, then they would rather devote all their efforts to fostering the domestic gas production and energy efficiency potential in Ukraine rather than at countering Nord Stream 2. This calls for two consequences:

A first is that US’ interference in the European gas industry, be it via sanctions or threat of sanctions, is simply inadmissible and must be seriously countered.

A second is that the European Union must also get its act together and entice Ukraine and Russia as well as Gazprom and Naftogaz, to sit around a table before the change of the European Commission, to credibly lay out the principles for the post 2020 Russian gas transportation to Europe. A solution here is the formation of a gas consortium in Ukraine, which would make gas transportation safe for Kremlin’s skeptics and ensure the modernization and good management of the system. That may come at a slightly higher cost for Gazprom but the ball lies in Gazprom’s court to provide long term predictability on the utilization of the system at a reasonable level. Ukraine also has its responsibility in laying out a tariff system that makes the Ukrainian route attractive, in credibly showing that if the consortium is not the solution, it will responsibly manage the system on its own. Ukraine’s government also needs to resolutely pursue the much needed energy sector reforms. European gas buyers and TSOs in turn should take their responsibility and make inroads into Ukraine to show that they care about the longer term sustainability of natural gas and that they understand that sidelining Ukraine is also detrimental to their longer term interests. All these aspects call for serious conversations to start soon rather than too late, but Russia, regrettably, does not think so yet.[6]