The middle classes have at times been heralded to be a guarantee for democracy. Studies that find a positive correlation (which should not be confused with causation) often use national economic data as a proxy for class and compare it to the current regime type.[1] 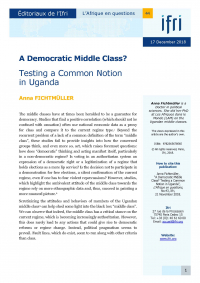 Beyond the recurrent problem of a lack of a common definition of the term “middle class”, these studies fail to provide insights into how the concerned groups think, and even more so, act, which raises foremost questions: how does “democratic” thinking and acting manifest itself, particularly in a non-democratic regime? Is voting in an authoritarian system an expression of a democratic right or a legitimization of a regime that holds elections as a mere lip service? Is the decision not to participate in a demonstration for free elections, a silent confirmation of the current regime, even if one has to fear violent repercussions? However, studies, which highlight the ambivalent attitude of the middle class towards the regime rely on more ethnographic data and, thus, succeed in painting a more nuanced picture.[2]

Scrutinizing the attitudes and behaviors of members of the Ugandan middle class[3] can help shed some light into the black box “middle class”. We can observe that indeed, the middle class has a critical stance on the current regime, which is becoming increasingly authoritarian. However, this does rarely lead to any actions that could give rise to democratic reforms or regime change. Instead, political pragmatism seems to prevail. Fault lines, which do exist, seem to run along with other criteria than class.

A Critical Stance towards the Regime...

Among the Ugandan middle class interviewed, there was generally a positive attitude towards democracy. Most people considered democracy to be preferable, and many believed that there was a need for more democracy in the country. For some, this meant that the country was not “ripe” for democracy, as the Ugandan “culture” was more inclined to authoritarian forms of government, but the majority believed that this was due to “misguided politics”. This is in contrast to the Afrobarometer results[4], which indicated general satisfaction with the level of democracy in the country among all Ugandans, even when the government is becoming increasingly authoritarian. Thus, it seems that the middle class is more supportive of democracy than the rest of the population.

In addition, the people interviewed were rather critical of the system. Corruption was the most cited problem, together with the lack of service delivery and the regime’s longevity, by both, the opponents and supporters of the system. This dissatisfaction is not unique to Uganda and has at times been portrayed by the media as the trigger for large “middle class” protests[5], such as in Turkey, Brazil or Iran. In Uganda, it has contributed to a rather critical stance towards the regime, as has been reflected in the electoral choices expressed by many middle class voters.

The middle class was more likely than the average Ugandan to support the opposition (which also reflects the tendency of urban voters more broadly), but not more or less involved in voting. Yet, the legitimacy of the elections is contested, as many consider them to be rigged.  Consequently, we notice dissatisfaction with the status quo among many. This is mainly due to the poor service delivery, and corruption levels and the higher tendency to vote for the opposition, albeit widely shared doubts that this would be a suitable mechanism to bring about change. However, this does not lead to the individual desire to actively change the status quo.

… but no Mobilization for Democracy

As already noted, we find that voting as a form of conventional political mobilization has a rather low participation threshold. Despite the commonly shared grievances such as the longevity of the regime or the omnipresence of corruption, there is hardly any evidence of extensive, sustained demands for government reforms or regime change.

The reasons are varied and inextricably linked to the history of the country and the current political conditions. Indeed, any general prescriptions about the political behavior of the middle class globally fail to account for the historical and political trajectory of a country and can only have limited explanatory power. In the case of Uganda, the hesitation of many to become more active has much to do with the perception of having only a restricted access to politics and does not only apply to the middle class.

Politics and politicians have generally a bad reputation. Politics is considered to be a “dirty game”, which serves mainly the interests of the individuals rather than the common good. Competition for political office is seen as a way of getting access to state resources, and opposition politicians are seen in a similar light as those from the ruling elite. Thus, the opposition does not seem to propose a viable alternative to the government when it comes to running the country. One woman exclaimed: “I’d rather stay with the thief I already know.” Hence, there is a general atmosphere of distrust concerning the political leaders of the country, and the political arena is not perceived as one where meaningful change is achieved, but rather one where individual struggles for personal profit are carried out. Instead, religious and traditional leaders enjoy a higher legitimacy among the population.[6]

While there is little regard for politicians, protesters are often perceived in the same way. Either the protests are considered to be a tool of the opposition to push their agenda, or they are associated with thugs, looting and violence. One woman explained her absence from the “Walk to Work” protests:

“You will find that the people that are involved in such things they are the unemployed. You get it? […] Explain it to a certain class of people, maybe to the lawyers. You think if you found lawyers protesting, would you take that lightly? Because these are believed to be the elites of the society! [...]”

Because those who participate in protests are the hungry, poor or uneducated, the issues do not seem relevant to the middle class, as they do not consider themselves as any of the above groups. This is fueled by a governmental discourse that opposes politics (what the opposition is doing) and development (what the government is doing), or violence (acted out by the opposition) and stability (brought by the current regime). As a result, activists often underline their apolitical or non-partisan nature, to appeal to as many people as possible, and not to be branded as opposition by the government.

This is also due to the fear of consequences. Indeed, while demonstrators have been perceived as causing violence, many respondents were aware that the regime used excessive force to crack down the protests. But the fear of consequences goes beyond the immediate realm of protest. On several accounts, respondents have iterated how they already have experienced disadvantages, such as being expelled from university, or not getting a job or the refusal of book shops to sell critical books, because of their opinion. Similarly, people would, often, lower their voices when discussing critical political issues in public. Also, while the political atmosphere cannot be compared to countries like Ethiopia and Rwanda, with an increasingly narrow civil space, people start censoring themselves.

Ethnicity and Age: the Power to Trigger Protest

Although the ongoing repressions and the multiple reasons not to participate in demonstrations, some people still do become active. In the past ten years, Uganda has seen four major protests and several riots. An analysis of those protests[7] has shown that the protesters mainly come from a young, urban “underclass” or are easily mobilized by ethnic considerations. The Buganda Kingdom still yields a considerable mobilization power among its subjects. But the major fault line is among those who become active and those who do not go along questions of age. The older generations remember the times of Milton Obote, Idi Amin and the civil war and they credit the current regime for the stability it brought. Fearing that a peaceful change of regime is not possible they prefer the status quo to the uncertainty a change of regime may bring. However, more than half of the Ugandan population is below the age of 30 and, thus, have not known any other ruler than Yoweri Museveni. The glorification of the past and its leaders as well as the resentment of the old ruling elite are common. Such feelings have just recently sparked into new riots, as the MP Robert Kyagulanyi, a popular musician known as Bobi Wine[8] has been arrested under dubious circumstances. He is considered the voice of the youth and symbolizes a break with the past that other leading opposition politicians cannot fulfill because of their entanglement with the regime.

Where does this leave the middle class? In Uganda’s past protests, the middle class has only scarcely been visible and even among issues that might be considered “middle class problems” such as environmental concerns or corruption, most of the respondents have shown little inclination to become active. Accepting the inefficiencies of the system (as many can afford it) will lower their expectations of the state and will, instead, turn into the private sphere, to be as independent as possible from state services, such as health care, education or retirement. They will also use their existing networks, personal connections and acquaintances to make their concerns heard to the right people. Encounters with the government happen only with those who do not have access to these other relays, such as the young urban poor and usually in the form of riots and protests.[9] While it forces the government to respond, and sometimes even to make concessions, these are no prescriptions for government reforms that would provide a democratic state in the long term.

[3]. These members were chosen because they corresponded to the criteria of the middle class definition given by the African Development Bank (2011). Interviews were conducted during three stays in Uganda in 2011, 2014, and 2017, with a total of 149 people interviewed.

[5]. D. Rhode, “The Revolt of the Global Middle Class. Here’s what protests in Turkey and Brazil have in common”, The Atlantic, 23 June 2013, www.theatlantic.com.

[7]. A. Fichtmüller, “Being In-between: Middle Income Groups in Uganda and Their Forms (and Absences) of Political and Social Mobilization”, PhD thesis, Institut d’Études Politiques, 2018, pp. 271‑304.

Mitigating Geopolitical Risk – Japan as a Stabilizer in...
END_OF_DOCUMENT_TOKEN_TO_BE_REPLACED
Has the European Union risen up to the challenges of geopolitics? Europe after the Czech...