What is the political significance of Southern Africa’s “hashtag movements”, socio-political campaigns using social media to disseminate information and to mobilise concerned and previously quiet segments of the public? 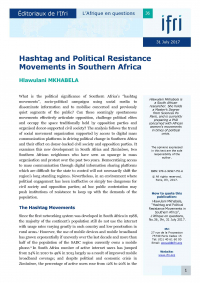 Can these seemingly spontaneous movements effectively articulate opposition, challenge political elites and occupy the space traditionally held by opposition parties and organised donor-supported civil society? The analysis follows the trend of social movement organisation supported by access to digital mass communication platforms in driving political change in Southern Africa and their effect on donor-backed civil society and opposition parties. It examines this new development in South Africa and Zimbabwe, two Southern African neighbours who have seen an upsurge in mass organisation and protest over the past two years. Democratising access to mass communication through digital information sharing platforms which are difficult for the state to control will not necessarily shift the region’s long standing regimes. Nevertheless, in an environment where political engagement has been ineffective or simply too dangerous for civil society and opposition parties; ad hoc public contestation may push institutions of resistance to keep up with the demands of the population.

Since the first networking system was developed in South Africa in 1988, the majority of the continent’s population still do not use the internet with usage rates varying greatly in each country and low penetration in rural areas.[1] However, the use of mobile devices and mobile broadband has grown exponentially if unevenly over the last decade and more than half of the population of the SADC region currently owns a mobile phone.[2] In South Africa number of active internet users has jumped from 24% in 2010 to 49% in 2015 largely as a result of improved mobile broadband coverage; and despite political and economic crisis in Zimbabwe, the percentage of active users rose from 12% to 20% in the same period.[3] For the moment, protests that gain momentum from web-based sharing have an urban bias as these areas are better covered by networks and higher incomes can support connection costs. But kinship ties and the movement of labour mean that exchange between rural and urban populations is an important part of Southern Africa’s politics.

Social media cannot create political opposition, but it does more than simply facilitate organisation: web-based information tools give the impression of a safer space for multiple ideas to germinate potentially normalising dissent, and allows citizens to plan with little need for organisation or direct interaction which could reenergise citizen activism in the region. In the last two years, South Africa has experienced a series of demonstrations employing social media and IP messaging applications as a key means of sharing information and making public a call to protest. These campaigns attract a heterogeneous group of concerned citizens and civil society organisations and have gradually embraced coalitions from various opposition parties. In 2015, Finance Minister Nhlanhla Nene’s arbitrary firing as well as anger over reports that President Jacob Zuma financed his private home using state coffers pushed thousands to gather in South Africa’s major cities under the banner #ZumaMustFall. The Tweeter hashtag has since been taken on, shared, interpreted and adopted by individuals and diverse interest groups protesting government corruption with Zuma at the helm. The latest act of mass mobilisation organised under the banner and similar hashtags was in April after the country’s credit rating fell to ‘junk status’. The use of social media terms and web-based tools has gained momentum taking on openly political themes and broader socio-economic grievances. #RhodesMustFall referenced student protests against retrograde attitudes and policies in tertiary education, #FeesMustFall allied workers and students criticising the high cost of education and pay for staff, and this year #MenAreTrash pulled together multiple protests decrying misogyny and an underwhelming security responses to violence against women.

A continued liquidity problem and fiscal deficit is straining Mugabe’s ZANU-PF’s support base leaving the government regularly unable to pay thousands of civil servants and state employees including the security forces. 2015 saw a rise in strikes and street protest by unpaid professionals and members of the public blaming the regime for the economic crisis. Access to the net is limited and focused on urban centres where about a third of the population resides, but social media has helped spread images and reports of citizen activism and police brutality stirring the public in the shadow of tight media control and suppression of civil society. #ZimShutDown2016 was used to refer to a general strike on 6 July 2016 that shutdown the country’s capital. In April 2016 under the banner #MyFlag Evan Mawarire a local priest with no real connection to political elites on both sides posted a video of himself wearing the Zimbabwean flag around his neck railing against the depletion of public services and an economic meltdown which impeded his ability to raise his family. The amateur video went viral as members of the public began sharing stories of hardship and wearing the flag as a sign of solidarity and protest. Mawarire became the face of a protest movement which coordinated the July strike supported by multiple blogs and other web-based groups such #Tajamuka, a campaign pulling together the youth wings of opposition parties and NGOs calling for Mugabe to step down and promoting continued citizen resistance.

Through movements arising from social media, new figures with little political experience and no clear affiliation to the regime or opposition parties could disrupt the political space. The general strikes brought forward Mawarire and Tajamuka leader Promise Mkwananzi who distance themselves from political party affiliation. In South Africa, an amalgamation of individuals including students, business leaders and interest groups direct and give a face to ad hoc protest movements. Neither opposition parties nor donor-backed civil society can direct the conversation, they are forced to either find their place in the discussion or risk falling by the wayside. A notable example is South Africa’s Economic Freedom Fighters, a young radical party which hitched its wagon to #FeesMustFall realizing that a more radical youth movement could overtake its efforts. This may be an important step in clearing the environment for opposition as non-political actors begin to play a role in the politics of opposition

Response from the State

In South Africa and Zimbabwe teargas and rubber bullets have been used by the police, and the ANC turns a blind eye on the intimidation of protesters by party loyalists bused in to destabilise peaceful protests. Governments prefer to downplay the significance of citizen mobilization through the web. Contradicting its tradition of non-racialism, the ANC has used the politics of race to undermine the heterogeneous crowds of protesters. Zuma’s administration claims that white interest groups are the puppet masters in the protest movement often noting that while the majority of white South African failed to oppose the Apartheid regime, they have turned up in number against a majority black government. ZANU-PF disparages new social movements, the minister of higher education Jonathan Moyo, described the #MyFlag movement as nothing more than a “pastor’s fart in the corridors of power”.[4] But the regime understands the danger and is reacting. In July 2016, over 300 protesters were arrested and the leaders of #MyFlag and #Tajamuka were arrested and subsequently released. During the July protest, access to IP messaging application WhatsApp was blocked and in the months following the general strike, data prices skyrocketed by up to 500% and state officials warned against those abusing social media for their own ends.[5] The strategy is to undermine movements, institutionalise violence against protestors, and suppress the means of expression whilst attacking those that emerge as leaders.

But perhaps the most powerful means of response by governments has been to simply not respond at all. The ANC has not altered its leadership or adopted policy in line with protestors’ demands; instead the party either ignores protests or pats itself on the back claiming that public protests are a sign of how democracy has ripened under their stewardship, while not responding in any concrete way.

An Opportunity for Civil Society and Opposition Parties

Civil society and opposition parties are essential if expressions of discontent are to have any real effect on state policies and challenge regimes. In South Africa, the grievances of protestors have been brought to the judiciary via strong civil society organisations and the intervention of interest groups with the resources to take advantage of institutional structures for redress. But the opportunity for formal civil society to organise the energy of disgruntled populations is not without pitfalls. Though #ZimShutDown2016 may have had massive urban support, ZANU-PF continues to have populist support and many of those that participated may be wary of associating with opposition parties and groups such Tajamuka/Sesijikle whose stated objective is the overthrow of the government. Buoyed by a growing wave of voices calling for Zuma to step down, in June of this year, a civil society collation made up of the FW De Klerk Foundation, the Quaker Peace Centre and AfriForum announced a bid to the Constitutional Court asking for Jacob Zuma to recuse himself from an inquiry into graft allegations. There are benefits to formal civil society taking forward public calls for change, but in divided societies, interests groups such as AfriForum formed to protect white agricultural interests and the De Klerk Foundation led by the last president of a white supremacist regime, may be accused of taking advantage of a public swell of discontent. The challenge presented by the amorphous form of organization nurtured by web connection is that it needs leadership, but the forms of leadership and direction that emerge can erode the credibility of movements in the eye of public.

Southern Africa’s donor-dependent civil society organisations often look outside their countries[6] or toward the government for funding, so what they can do and how they can respond is shaped (not determined) by the availability of external aid and the stipulations of donors. Though donor-supported civil society groups have been accused by the region’s governments of acting as foreign agents, dependence on donor aid has a politically pacifying effect.

[4]. “The Simple Genius of Zimbabwe’s Thisflag Protest and the Man who Started It”, Daily Maverick, 22 May 2016, www.dailymaverick.co.za.

[6]. Significant donor organizations funding local civil society in Southern Africa include state government agencies USAID, the UK’s Department for International Development and European Commission support often channelled through national and regional partnerships. But private philanthropic institutions such as the Ford Foundation, the Open Society Foundations, Islamic Relief Worldwide and local philanthropic trusts attached to established corporations such as Anglogold Ashanti and Sasol play an important role and often target projects in line with their own priorities.