Until recently, Saudi Arabia was the country out of the Gulf countries that had the greatest number of diplomatic missions in Africa (27[1]). 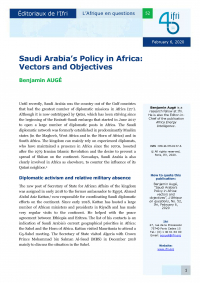 Although it is now outstripped by Qatar, which has been striving since the beginning of the Emirati-Saudi embargo that started in June 2017 to open a large number of diplomatic posts in Africa. The Saudi diplomatic network was formerly established in predominantly Muslim states (in the Maghreb, West Africa and in the Horn of Africa) and in South Africa. The kingdom can mainly rely on experienced diplomats, who have maintained a presence in Africa since the 1970s, boosted after the 1979 Iranian Islamic Revolution and the desire to prevent a spread of Shiism on the continent. Nowadays, Saudi Arabia is also clearly involved in Africa as elsewhere, to counter the influence of its Qatari neighbor.[2]

The new post of Secretary of State for African Affairs of the kingdom was assigned in early 2018 to the former ambassador to Egypt, Ahmed Abdul Aziz Kattan,[3] now responsible for coordinating Saudi diplomatic efforts on the continent. Since early 2018, Kattan has hosted a large number of African ministers and presidents in Riyadh and has made very regular visits to the continent. He helped with the peace agreement between Ethiopia and Eritrea. The list of his contacts is an indication of Saudi Arabia’s current geographical priorities in Africa: the Sahel and the Horn of Africa. Kattan visited Mauritania to attend a G5-Sahel meeting. The Secretary of State visited Algeria with Crown Prince Mohammad bin Salman Al-Saud (MBS) in December 2018 mainly to discuss the situation in the Sahel.

Kattan continued to monitor these two issues, which France, in the case of the G5-Sahel,[4] and the United Arab Emirates (UAE), for the Horn, need funds and/or Saudi Arabia’s political influence for. In 2019, the Sudanese issue gradually emerged as a priority. Protests in April 2019 removed President Omar Al-Bashir, who had been in power for 30 years, and Saudi Arabia and its Emirati ally tried to influence the transition with the help of the number two of the self-proclaimed body in charge of transition, the Transition Military Council (TMC), Mohamed Hamdan Daglo known as Hemiti[5]. The latter traveled to Arabia several times, particularly to perform the hajj in July 2019. He took the opportunity to obtain guarantees from Riyadh regarding his political support. Similarly, after the formation of the civilian government in Sudan in August 2019, Abdel Fattah Al-Burhan, the former head of the TMC and Prime Minister Abdallah Hamdok, chosen by the Alliance for Freedom and Change (the civil society group that brought down Bashir) went to Riyadh at the beginning of October.

Secretary of State Kattan can rely on a network of experienced Saudi diplomats. The ambassador to Sudan since 2018 – and since October 2018 to South Sudan – Ali bin Hassan Jafar was previously ambassador to Russia (2008-2015). In Morocco, it is the former Director of Protocol to Crown Prince Mohammad bin Salman, Abdellah bin Saad Al-Ghariri, who was chosen as ambassador in 2018.

Militarily wise, Saudi Arabia remains relatively absent in Africa. Even in the field in Libya, it settles for supporting General Khalifa Haftar politically, who MBS receives regularly, without supplying equipment to him unlike the UAE. It also prefers to commit to funding the G5-Sahel, rather than cooperating operationally with the organization.

Saudi Arabia’s economic investments in Africa are still in the early stages. Some state giants, like the chemical company SABIC – which is 70% owned by the state via Saudi Amarco – have been opening offices or subsidiaries in Morocco, Tunisia and in South Africa[6] for a decade with results that are still difficult to assess. As for Saudi Aramco, it has almost never invested in Africa, unlike Qatar Petroleum or Kufpec (Kuwait). In order to counterbalance Iranian influence in South Africa, the now former Saudi Minister of Petroleum, Khalid Al-Falih, promised to build a giant 300,000 barrel per day refinery (half of South Africa’s needs) by 2028. The chances of realizing such a refinery project in South Africa however seem very slim as the financial stakes are high, more than $10 billion.[7] In the armaments industry, Saudi Arabian Military Industries (SAMI) wanted to invest a billion dollars in the South African Denel group in 2018,[8] a project that is still unfinished today. The Saudi private company, Acwa Power, invested in solar power stations in South Africa (Bokpoort and Redstone, as well as a coal one in Khanyisa), and in Morocco (Noor I, II and III and Ouarzazate) and in Egypt (solar with Benban). Attempts in other sub-Saharan countries, like Senegal have been unsuccessful.

Saud Arabia also wanted to invest in agriculture in Africa by acquiring arable land. This strategy was mainly materialized via the Saudi-Ethiopian billionaire, Mohammad Al-Amoudi’s company Saudi Star Agriculture Development PLC. The latter acquired a concession focusing on 10,000 hectares in the Gambela region of Ethiopia. The King Abdullah Initiative for Saudi Agricultural Investment Abroad, launched in 2008, to meet the kingdom's food needs promised to invest in Africa by purchasing millions of hectares. However, ultimately, relatively few concrete purchases were realized on the continent.[9]

Another vector of influence for Saudi Arabia: funds granted in the form of loans or grants by the Saudi Fund for Development (SFD). Since its foundation in 1975, the SFD has contributed largely to Africa (52% of the amount paid out), or seven billion dollars. On current projects – targeting a variety of sectors from electricity to roads, water supply, education, healthcare, etc. – the SFD has spent 4.2 billion euros in Africa. Out of this amount, more than 60% involves the Maghreb (40% for Egypt alone). Another country stands out in terms of aid: Djibouti. This receives 1/5th of the total of loans allocated to East Africa.[10] Djibouti also receives three times more than Ethiopia and twice as much as Kenya. In West Africa (18 countries according to the SFD's list – which Somalia and Gabon are curiously part of), more than a quarter of the outstanding amount relates solely to Mauritania. The latter has been one of the pillars of Saudi Arabia’s African policy for a long time, especially as the severance of diplomatic relations with Doha by Nouakchott has only reinforced this tropism. Senegal is the second recipient in the West African area, with almost half of the credits.

In addition to the SFD, Saudi Arabia can count on its significant influence in the Islamic Development Bank (IsDB), whose headquarters are in Jeddah. $130 billion has been out paid out since the IsDB was founded in 1973. Although, this now has 57-member country shareholders, Riyadh retains a very specific influence by holding 23.5% of the capital. Africa currently receives 23% of the funds granted by the IsDB. The main African countries involved are Senegal (9% of total IsDB funds worldwide), Egypt (5.9%) and Morocco (4.9%[11]).

Saudi Arabia can also count on its influence within the Organization of Petroleum Exporting Countries (OPEC), which now includes seven African countries (Algeria, Libya, Nigeria, Angola, Congo, Gabon and Equatorial Guinea) as members, out of a total of fourteen. Congo and Equatorial Guinea joined in the last two years with the hope of attracting Gulf funds, particularly Saudi, to their economies in crisis.

Islam as a vector of influence

The presence of the Holy Sites of Islam in Mecca and Medina and the arrival of millions of pilgrims each year for the hajj is not only a significant windfall – estimated to be $ 8 billion annually[12] – but also confers a strong symbolic and political advantage on Saudi Arabia. The latter issues quotas to all countries in the world for the pilgrimage. However, the variation in the number of visas issued is an effective lever of pressure that Riyadh has to make some countries bend, as part of its diplomacy.[13] The pilgrimage also enables many political leaders from the Muslim world to come and meet members of the royal family and government each year. The universities of Islamic studies are another key vector of Saudi Arabia’s influence through the religious sphere. The Islamic University of Medina, the Umm Al-Qura University in Mecca, and Imam Muhammad ibn Saud Islamic University in Riyadh[14] have been training thousands of imams and ulamas through scholarships since the 1970s. The latter, once they have returned home, not only practice Wahhabi Islam in mosques that are often built with money from Riyadh, but also have a strong attachment to the Kingdom that trained them. Nowadays, this clergy that has been molded for three decades in these universities, occupies the highest religious positions in Africa and has some influence over their country’s political authorities.

Multiple Saudi charities also make donations to African countries, indirectly increasing the Wahhabi kingdom’s influence. This is the case, for example, of the King Faisal Foundation, 43 of whose 197 projects are targeted at Africa. Additionally, billionaires from the royal family, like Alwaleed bin Talal Al-Saud fund aid programs to the tune of millions of dollars, much of which goes to Africa.

Saudi Arabia has put a policy in place linking diplomacy, financial aid and the politicization of Islam in order to have influence in Africa. Although, its objectives have not always been achieved (apart from Egypt, no major African power has taken a stand against Qatar – Nigeria, Morocco, Algeria and South Africa have refrained), however, it has built a solid network of alliances, particularly in the Sahel and the Horn of Africa. It is mainly through official state channels that Riyadh’s power in Africa is deployed, since the private sector's economic initiatives are still very modest. The men in the background and other intermediaries, although they obviously exist, are not the kingdom’s main vector for African policy which can count on an experienced administration. Saudi Arabia does not seem to consider Africa as a projection area for its economy. Its investments there still remain undisclosed compared to donations and partnerships operating with money from the zakat (alms-giving).

[1]) To consult the list of Saudi missions in Africa, see the Ministry of Foreign Affairs’ website, available at: www.mofa.gov.sa.

[2]. B. Augé, “Un an après le début du blocus saoudo-émirati contre le Qatar. Quelles conséquences pour l’Afrique de l’Ouest?” [A Year after the Start of the Saudi-Emirati Blockade against Qatar. What Are the Consequences for West Africa?], L’Afrique en questions, No. 42, Ifri, October 2018, available at: www.ifri.org.

[3]. Kattan has a long career in Saudi diplomacy behind him. Posted to the United States for 21 years where he spent three years as deputy to the powerful Saudi ambassador Bandar bin Sultan bin Abdelaziz Al-Saud (1983-2005). After returning to Saudi Arabia, he was appointed ambassador to Egypt from 2011 to 2018, where he also represented his country at the Arab League.

[4]. Most of the funds are theoretically intended for the purchase of French military equipment for G5-Sahel member armies.

[5]. Omar Al-Bashir did not get involved in isolating Qatar in June 2017, despite Saudi and Emirati pressure. The Muslim Brotherhood movement, very present in the Sudanese state apparatus, is indeed mainly supported by Doha.

[10]. The SFD has a very broad definition of East Africa including 17 countries ranging from Seychelles to Zambia, Comoros to Madagascar.

Mitigating Geopolitical Risk – Japan as a Stabilizer in...
END_OF_DOCUMENT_TOKEN_TO_BE_REPLACED
Has the European Union risen up to the challenges of geopolitics? Europe after the Czech...