Tensions at Sea in East Asia: A Japanese View on Chinese Lawfare Practices Lettre du Centre Asie, No. 91, 21 May 2021

Tensions at sea are growing and multiplying both in the East and the South China Seas. 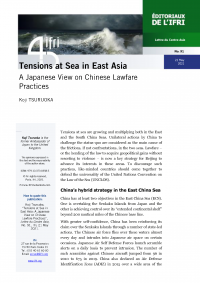 Unilateral actions by China to challenge the status-quo are considered as the main cause of the frictions, if not confrontations, in the two seas. Lawfare – or the bending of the law to acquire geopolitical gains without resorting to violence – is now a key strategy for Beijing to advance its interests in these areas. To discourage such practices, like-minded countries should come together to defend the universality of the UN Convention on the Law of the Sea (UNCLOS).

China has at least two objectives in the East China Sea (ECS). One is overtaking the Senkaku Islands from Japan and the other is achieving control over its “extended continental shelf” beyond 200 nautical miles of the Chinese base line.

With greater self-confidence, China has been reinforcing its claim over the Senkaku Islands through a number of state-led actions. The Chinese air force flies over these waters almost every day and intrudes into Japanese air space on certain occasions. Japanese Air Self Defense Forces launch scramble alerts on a daily basis to prevent intrusion. The number of such scrambles against Chinese aircraft jumped from 96 in 2010 to 675 in 2019. China also declared an Air Defense Identification Zone (ADIZ) in 2015 over a wide area of the ECS, overlapping with the ADIZ of Japan, South Korea and Taiwan. This ADIZ includes clauses that stipulate that Chinese authorities could order flights that they find problematic to exit this zone and take necessary means to enforce this. This provision could be highly problematic if implemented unilaterally by Beijing. Japan immediately protested to China, with the US, ROK, Taiwan, Australia, the EU, the Philippines, Canada and Vietnam following suit.

China Coast Guard (CCG) ships have also multiplied incursions into Japanese territorial waters (up to 40 times a month) and have harassed Japanese fishing boats in Japan’s Exclusive Economic Zone (EEZ). Japanese Coast Guard boats are struggling to cope with these actions. Such unilateral moves are violating all norms of international law and in particular the UNCLOS, which China participated in drafting, signed, and ratified. Japan has lodged a protest through diplomatic channels on every occasion, but Chinese actions are multiplying and intensifying. Tokyo has repeatedly urged Beijing to cease these provocations but has received no response, except being told that China is simply manifesting its sovereign rights.

In February 2021, China enacted a new Coast Guard Law which contains a number of provisions that do not comply with UNCLOS, such as the possibility for the CCG to resort to force when deemed necessary against war ships or any other non-commercial official vessels. This new law allows the CCG to exercise policing activities in territories “under the jurisdiction” of China, which is an ambiguous term. It is threatening to have a country unilaterally decide where it can exercise its authority and the CCG law has been subject to protest by many countries such as Japan, the US, Vietnam and the Philippines.

In response to these criticisms, China always proclaims it is acting in compliance with UNCLOS. This seems to indicate that China is mindful of the need to abide by international law. The question is why Beijing holds a different interpretation of the law. Whether China misreads UNCLOS or is ignoring the Convention remains a mystery.

Lawfare at sea in the South China Sea

Growing tensions in the South China Sea (SCS) are about the complex maritime and territorial disputes between the claimants, but it is also about the broader question of the universality of rules and laws. On this dimension, a legal battle has been ongoing for years in the UN.

Back in 2009, China presented a Note Verbale to the UN Commission on the Limits of the Continental Shelf in response to a joint submission by Malaysia and Vietnam asking for an extension of the outer limit of their continental shelf. The Chinese Note had an attached map of the SCS on which a dotted line appeared, supposedly to represent Chinese claims in the area. On this flawed basis, China has been taking control of atolls in the SCS, expanding them and building military infrastructures. Many of these constructions were conducted in disputed areas, without consultation with the other claimants. These unilateral moves have also contradicted the Declaration on the Conduct of Parties in the South China Sea that China and ASEAN concluded in 2002, which states that “the Parties undertake to exercise self-restraint in the conduct of activities that would complicate or escalate disputes and affect peace and stability including, among others, refraining from action of inhabiting on the presently uninhabited islands, reefs, shoals, cays, and other features and to handle their differences in a constructive manner.”

In 2016, the Permanent Court of Arbitration in the Hague delivered its award on the maritime dispute between the Philippines and China. Unsurprisingly, China rejected the ruling, arguing that it violates UNCLOS.

More recently, another series of Notes Verbales has taken place from December 2019, triggered by Malaysia’s request for an extension of its continental shelf. China immediately submitted a Note Verbale reaffirming its claims on the SCS based on historic rights. The Philippines, Vietnam, Indonesia, the US, Australia, the UK, Germany, France and Japan and others submitted their own Notes stating their disagreement with the Chinese position. Beijing has still not succeeded in demonstrating a solid legal grounding to back its claims.

In the meantime, China is continuing to unilaterally strengthen its position in the SCS, most recently by sending over 200 fishing boats to the territorial waters of the Philippines.

The ongoing debate at the UN is referred to by some observers as a “Battle of Notes Verbales”. Of course, this is not a real war, and the battleground is the International Law of the Sea. UNCLOS was created by a collective effort of the UN members and is the cornerstone of maritime law. Important innovations are included in this Convention such as the expansion of territorial waters to 12 nautical miles, the creation of Exclusive Economic Zones, and the definition of the Continental Shelf. UNCLOS also strongly protects the rights of freedom of navigation and overflight.

The Convention has also set up a procedure to decide once and for all, in a legally binding manner, any issue regarding the interpretation of UNCLOS. The legality of historic rights is a salient issue over which China and others disagree. China is today the largest trading nation, and as such depends on unhindered navigation to safely continue to trade. Critical items including energy resources from the Middle East travel to China through the SCS. It thus should be of interest to China to settle the differences described above through a legal debate. Of course, Beijing should not resort to unilateral actions while discussion on UNCLOS interpretation is ongoing. The ongoing debate of Notes Verbales presents an opportunity for UN members to resolve disputes in a peaceful manner and through the respect of the rule of law in accordance with the UN Charter.

As an island-state, Japan relies on international law, including UNCLOS, to preserve the freedom of navigation and a rules-based order. It thus needs to make sure that international law is applied consistently. In this perspective, Japan is supporting efforts by like-minded countries to join forces to ensure the Law of the Sea is consistently interpreted and implemented. Tokyo therefore welcomes the European commitment to make the Indo-Pacific a free and open region, which is in line with UNCLOS principles.

Neither surveillance nor algorithmic consumerism. Towards...
END_OF_DOCUMENT_TOKEN_TO_BE_REPLACED
Citizen Mobilization: A Solution for Refugee Integration in Europe?