China’s Military Deployments in the Gulf of Aden: Anti-Piracy and Beyond Asie.Visions, No 89, November 2016

The reason for the deployment of a People’s Liberation Army Navy (PLAN) “anti-piracy task force” in the Gulf of Aden (GoA), a key area for the Chinese economy, was obvious in 2008. However, as the pirate activity has faded away since 2012, the objectives of the PLAN in GoA became unclear. 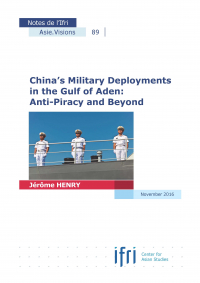 This article seeks to understand those objectives and how the anti-piracy missions have evolved from protecting Chinese shipping interests in GoA to a strategic forward deployment, contributing to the rise of Chinese sea-power in the Indian Ocean.

With the development of its economy, China has shown growing interest in the sea for both political and economic reasons. In that context, its navy should play a key role, which explains the Chinese government efforts to modernize its fleet, seeking to turn its historical coastal navy into a blue-water navy with global ambitions. The purpose of the modernization of the PLAN into a blue-water navy is, first, to develop a military tool that can contribute to the reunification with Taiwan, impose the Chinese view on contested territories in the China Sea, and counterbalance US Navy superiority in this part of the world. Second, the role of the Chinese navy is to secure national economic interests in the world, and especially the sea lines of communication (SLoC) vital for the export market and for energy supply. For that reason, the development of a power projection capability became a priority for the PLAN. In the light of PLAN modernization, the GoA deployment seems in line with China’s intention to extend the reach of its navy and to develop power projection capability. In that context, Xi Jinping’s assertive foreign policy to secure Chinese economic interests abroad and especially his Maritime Silk Road initiative was a strong accelerator in the evolution of the PLAN objectives in GoA.

After six years of deployment in GoA, the PLAN has shown that anti-piracy was not its main objective. PLAN modernization has allowed China to start building up a blue-water navy designed to project power in the Far Seas. If the development of such a capability is mainly designed to face contingencies in the China Sea, among which Taiwan remains the priority, expanding PLAN’s reach toward the Indian Ocean has also grown in importance under Hu’s and Xi’s mandates. Thus, China’s escort task force (ETF) deployment in GoA contributed to fulfill different objectives related to this context. It aimed first at protecting Chinese shipping interests against piracy. However, it also contributed to the development of a Chinese blue navy, enhancing power projection capability and acquiring Far Seas experience. Furthermore, improving China’s image was part of the objectives pursued by the PLAN in GoA with the protection of Chinese vital interests in the Middle East, North Africa, and East Africa. The growing political willingness to increase China’s influence, embodied by the Maritime Silk Road, suggests a progressive increase of the PLAN’s presence in the region. The start of construction of a Chinese base in Djibouti recently appears to confirm this assumption. The current building-up of an indigenous carrier strike group would be the next step in the power-projection capacity-building.

Building Bridges over the Blue Pacific. Beyond Marine...
END_OF_DOCUMENT_TOKEN_TO_BE_REPLACED
Asia after the War in Ukraine: Re-imagining multilateralism and the risk of...