As China’s political relations with most of the world’s technologically advanced states have worsened, Beijing has put in place the world’s most comprehensive regulatory and administrative system for governing cyberspace. 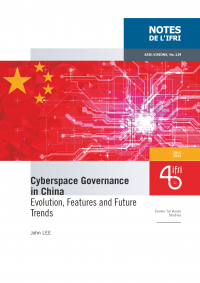 Increasingly onerous compliance challenges for actors using Chinese cyberspace, and China’s recent crackdown on internet technology firms have focused foreign attention on the Chinese Party-state’s goals for this critical domain. More globally, the growing pervasiveness of cyberspace has made its governance a key factor in international trade and politics, and therefore a topic of great importance.

To understand China's goals, it is not sufficient to look at recent events and contemporary pressures. China’s cyberspace governance regime is the result of a decades-long development process, over which the Party-state has responded to the global evolution of cyberspace and defined its interests against changing conditions. The emergent nature of cyberspace has created significant governance challenges even for the most technologically advanced nations. China entered this domain from a disadvantageous technological position, in the course of rapid development and relative political liberalization. Accordingly, China’s Party-state relatively early recognized cyberspace governance as an existential issue. Quoting the Chinese Communist Party’s journal of record, ‘if our Party cannot overcome the obstacles presented by the internet, it cannot maintain its long-term hold on power.’

This report summarizes the development of the Party-state’s engagement with the internet and the global digital technology industry, and the evolution of its policies towards managing cyberspace as an integrated whole. It then discusses the main actors and their roles in the ‘noodle bowl’ of institutions involved in governing Chinese cyberspace. Although still characterized in many respects by bureaucratic overlap and unclear definitions, this institutional system has now stabilized enough for its main aspects to be described. The same is true of China’s evolving regulation for cyberspace, the most important elements of which are described in the report, in particular the increasingly onerous rules governing data handling and cross-border data transfers.

In conclusion, China’s system for cyberspace governance and its future development is discussed in international context. For foreign governments as well as private actors, learning to engage with this system is an unavoidable task that will only become more complex and risk-laden, as the Party-state’s goals become more ambitious and political relations with Western countries show few signs of improving. China’s cyberspace governance system is unlikely to be rolled back, even in response to changing circumstances. Rather, it should be expected to continue expanding, giving the Party-state more visibility and tools of control over activity on China’s digital networks, and increasingly over foreign activity that impacts upon Chinese cyberspace. Nevertheless, China’s unique model may also provide constructive lessons for other nations, being shaped by many of the same challenges that cyberspace presents to societies worldwide.

Building Bridges over the Blue Pacific. Beyond Marine...
END_OF_DOCUMENT_TOKEN_TO_BE_REPLACED
Asia after the War in Ukraine: Re-imagining multilateralism and the risk of...