In the last decade, the strengthening of the India-Japan strategic partnership has been primarily driven by geopolitical considerations, in an era of competing regional visions and influence. 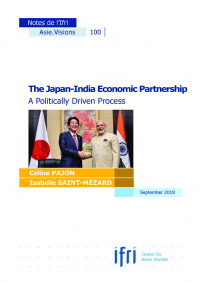 While bilateral relations have shown progress in terms of political values and interests, strategic convergence and military cooperation, their economic dimension has seemed to lag behind. While India has been one of the largest recipients of Japanese official development assistance (ODA) loans since 2003, it made up only 2.2% of Japan’s total overseas direct investment (ODI) flows in 2016. Moreover, the volume of bilateral trade has remained surprisingly modest.

In other words, India and Japan still need to boost business links to give more substance to their bilateral partnership as well as support India’s robust and long-term development and economic growth, as Japan needs a strong democratic partner in Asia. The objective is highly political. Japan and India are eager to develop their partnership as a balancing act vis-à-vis China. If they are to fulfill their ambitious geopolitical visions, they also need to promote cooperation in third countries.

Because of the strategic significance of the rapprochement, state actors (political leaders, ministries, governmental agencies, public banks) have been predominant in driving the India-Japan relationship, including in its economic dimension. Thus, this policy paper documents and analyzes the leverage that Japanese and Indian state leaders have exercised in boosting the bilateral economic partnership. It shows, in particular, that Japan’s mobilization of its state actors and public funding to support India’s economic development, to encourage Japanese private investments and to give concrete shape to its geostrategic vision for the Indo-Pacific region has been exceptional. This can be explained by the strategic importance of India as a future political and economic global power, the characteristics of India’s political structure and business environment, which requires a high level of political commitment, and the unique leadership of the Japanese and Indian strongmen since 2014: Shinzo Abe and Narendra Modi. In many ways, the combination of the Modi and Abe leaderships since 2014 has provided the best political context ever to impart fresh momentum to bilateral economic relations.

The voluntarism displayed by Abe and Modi has paid off to some extent. India and Japan have focused on infrastructure development as a strategic area of cooperation, and Japanese ODA loans have played a pivotal role in the process. State actors are playing an important role in launching initiatives, building up industrial corridors (Delhi-Mumbai Industrial Corridor and the Chennai-Bengaluru Industrial Corridor) and industrial townships. These are designed to remove some of the traditional roadblocks for Japanese ODI and support India’s economic growth. On the Indian side, a number of dedicated measures to grant preferential treatment and encourage Japanese public and private investments have been implemented, both at the central and state level.

Japanese investments in India has increased (albeit at an irregular pace) and diversified from a sectoral and geographical point of view. While Japanese companies have strong interest in the Indian market, it takes a long time (five to ten years) for them to actually implement an investment project. Administrative hurdles and local business conditions are still putting brakes on Japanese projects, and the “Make in India” policy has introduced new constraints. Despite good prospects for profitability, India stands as one of the toughest markets in Asia for Japan.

The agenda of Japan and India on promoting infrastructure building to enhance connectivity, both within India and within the greater Indo-Pacific region, has been converging. It supports the strategic goal to help India to reintegrate East Asia while counterbalancing growing Chinese influence in the region – especially through its infrastructure-funding Belt and Road Initiative (BRI) – through three pillars: growing synergies between Indian and Japanese grand visions for the region; promotion of Japanese investments in strategically sensitive Indian states and territories, and efforts to encourage joint investments in third countries, especially in Africa. The Japanese infrastructure funding in India’s Northeast is a test case for Tokyo’s political commitment, as the security situation and China’s interests in the region make it a complex area for investments. The Andaman and Nicobar Islands are even more sensitive and, despite much speculation, Japanese engagement is likely to remain low. Interestingly, the Asia Africa Growth Corridor project results from the convergence of a bottom-up and top-down process, as the Japanese business interest in using India as a springboard to Africa met the need to provide a geopolitical alternative to China’s BRI by improving interconnectedness between Asia and Africa.

The bilateral rapprochement has thus been accelerated under Abe and Modi, but one should also underline that previous governments, both in Japan and in India, consistently supported the building of a strategic partnership. Therefore, for the time being, Japan’s ODA and ODI disbursement to India should be set on a sustainable upward trend.