China is rapidly emerging as a formidable power in the development of technical standards, transforming the international standard-setting landscape and reintroducing an element of geopolitics into what are too often considered as benign, technical processes. 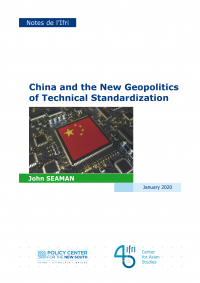 From emerging technological fields such as 5G, artificial intelligence (AI), the Internet of Things (IoT) and smart cities to traditional sectors including energy, health care, railways and agriculture, China is increasingly proactive in nearly every domain where technical standards remain to be developed and set.

Technical standards are the definition of processes or technical specifications designed to improve the quality, security and compatibility of various goods and services, for instance GSM for telecommunications or WiFi for wireless Internet. They can be thought of as basic specifications or technologies on which other technologies or methods will evolve – creating lock-in effects and path-dependency for future products and technological trajectories. Defining standards can provide significant benefits for society at large, but can also carry significant implications for which technologies will dominate future markets and provide substantial advantages to those who master standardized technologies.

Chinese policymakers have become keenly aware of the relationship between technical standard-setting and economic power. Indeed, a popular saying in China posits that third-tier companies make products, second-tier companies make technology, first-tier companies make standards. In 2015, the State Council highlighted China’s deficiencies in the field and set out to transform the country’s standardization system, seeking to harness the capacity of standard setting not only to improve the daily lives of its citizens, but to drive innovation, boost China’s economic transformation toward the industries of the future, and turn China into a premier purveyor of international technical standards.

Indeed, the ability to define technical standards is both a mark and an instrument of international power competition. Until now the field has largely been dominated by the United States, Europe, and Japan. China’s latecomer status to international standard setting means that it has faced an up-hill battle in shaping the development of this space. Nevertheless, as its ability to propose core innovations in a growing number of emerging technological fields grows – as witnessed by its successes in the field of 5G, and its ambitions in the field of AI – China’s capacity to transform the international standardization landscape will also expand and it will increasingly seek to shape international standards in line with its own interests. Already, China has proactively integrated major standard-setting bodies such as the International Organization of Standardization (ISO) and a broad range of international industry-level forums where technical standards are developed. At the same time, it has pursued a parallel, China-centered track that involves promoting “mutual recognition” of standards at the bilateral level with a large number of countries and is increasingly coordinating standardization within the context of its Belt and Road Initiative.

In effect, China’s dual-track approach to international standard setting reflects competing tendencies toward greater cooperation and convergence on standards, on the one hand, and a broader fragmentation or bifurcation of international standards regimes on the other. At the same time, the global economy faces similarly competing pressures, with protectionism and rising techno-nationalism pushing back against a new potential wave of technologically-driven globalization. As China’s emergence continues to reshape the international system more broadly and as geopolitical tensions become more pronounced, the standard-setting space will be a gauge of whether we are moving toward a more integrated, globalized world or more fragmented international economic and political systems.

The EU’s Renewables Expansion Challenge Towards 2030:...
END_OF_DOCUMENT_TOKEN_TO_BE_REPLACED
Neutrality and non-alignment after the Russian Invasion of Ukraine...